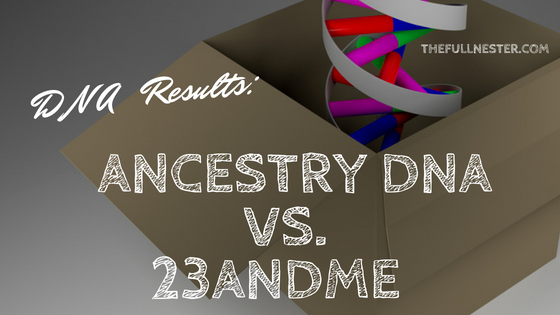 I got my results back from 23andMe, which tests for Neanderthal DNA, and I have it. A LOT of it. Which explains so many things. 🙂

But before I get into that, let me tell you about my experience with DNA testing. About a year and a half ago, my husband, daughter and I decided to have our DNA tested using AncestryDNA. The kit is around $99, depending on where you buy it, but if you keep an eye out, they run specials around Mother’s Day, Father’s Day, Christmas and St. Patrick’s Day (because we’re all a little bit Irish). 🙂

When the kit arrives in the mail, it contains a tube that you open, spit into up to the fill line, seal, and mail it back to Ancestry. There is a number on the kit that you use to register your account on the website and this will allow you to view your results once they are in. We were all very fascinated by our results. My husband and daughter are far more exotic than I am. 🙂 I wrote a blog last year about our results that you can check out if you want all the details.

Then a few months ago I started paying more attention to commercials for 23andMe and was really interested in their ability to test for Neanderthal DNA. Now, when I think of Neanderthals, I think of those cavemen in the old GEICO commercials. This isn’t entirely accurate. Neanderthal is a term used for people who lived in the Neander Valley of Germany. “Tal” is German for “valley.”

Neanderthals were hunters who did live in caves, among other places, and they knew how to make and use fire and stone tools. Their remains have been found in Western, Central, Eastern, and Mediterranean Europe, as well as parts of Asia. No remains have been found south of the Levant, east of Siberia, or north of Wales. They are believed to have become extinct about 40,000 years ago.

I was curious to know about whether I had Neanderthal DNA because my grandmother’s people are from the area of Germany that includes the Neander Valley. So I ordered a kit. With 23andMe, you can choose to order just a DNA kit that gives you your genetic breakdown, or you can choose the kit that also analyzes your DNA for genetic health risks, your status as a carrier of certain medical conditions, and wellness reports. I ordered the basic DNA kit, which is comparable in price to Ancestry, at about $99.  The kit with the medical component runs about $139. Like Ancestry, 23andMe runs specials around certain holidays.

This kit works the same way as the one from Ancestry, just spit and mail it off. The results from both companies can take up to six weeks. Mine both came back a little faster than that but if you purchase during one of the promotions it may take the full six weeks.

So here’s a comparison of the results on the DNA distribution: 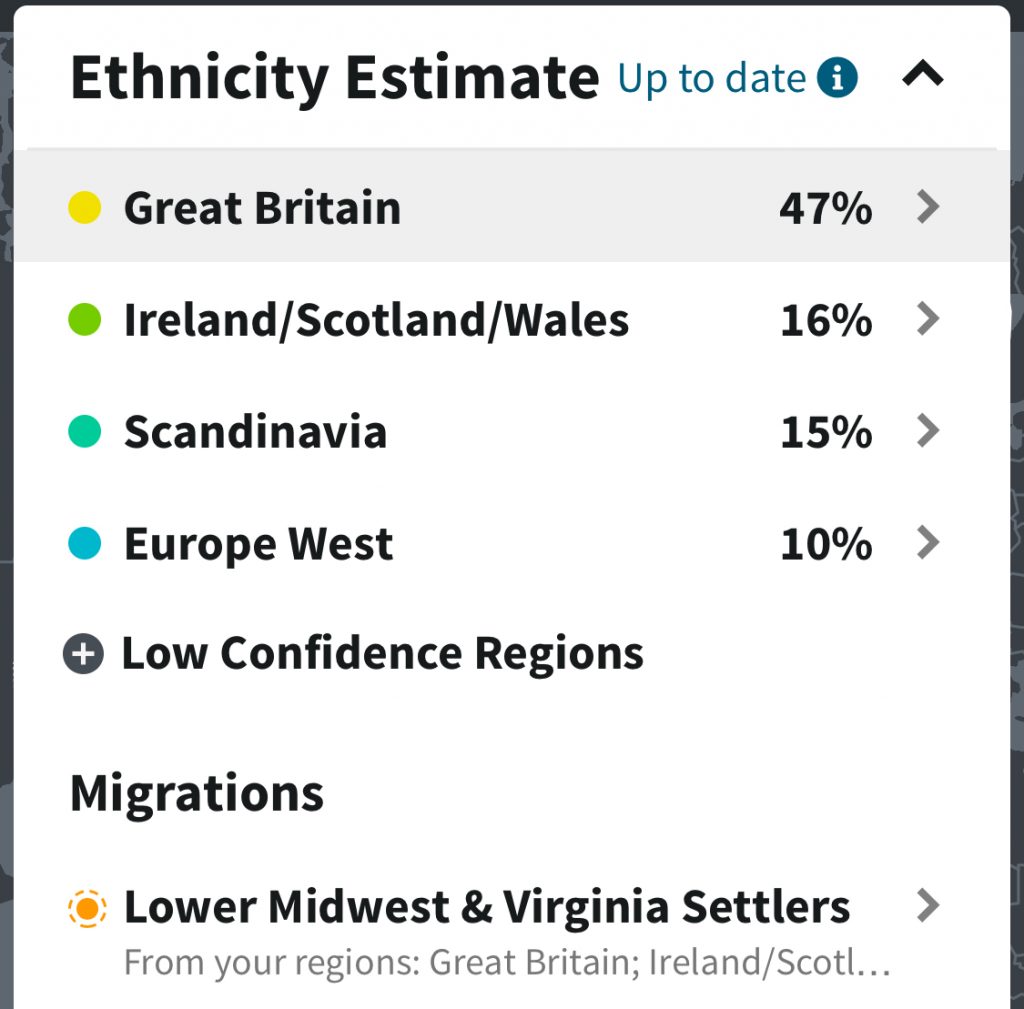 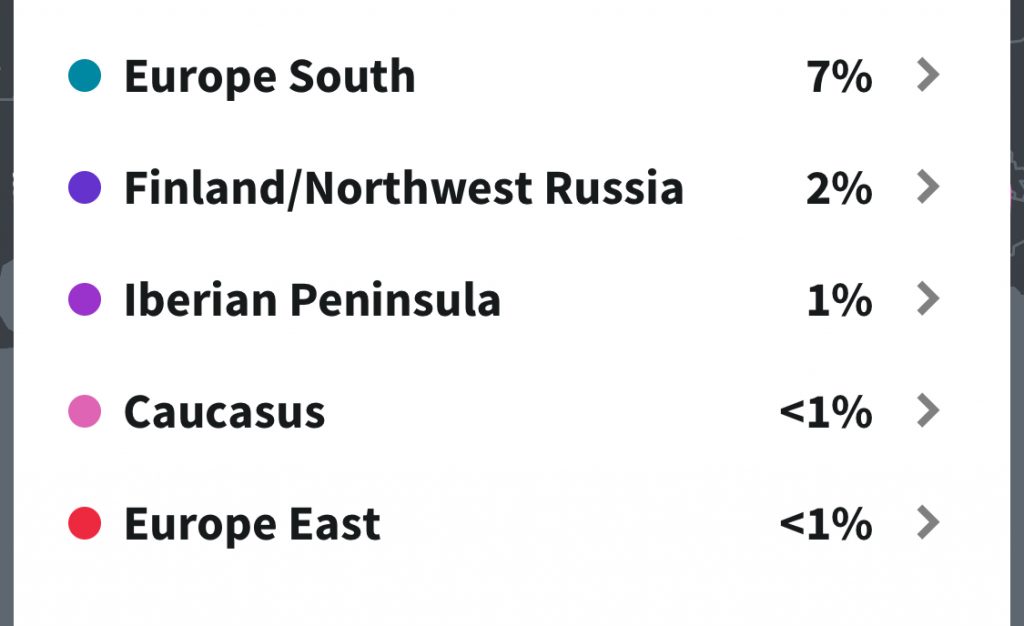 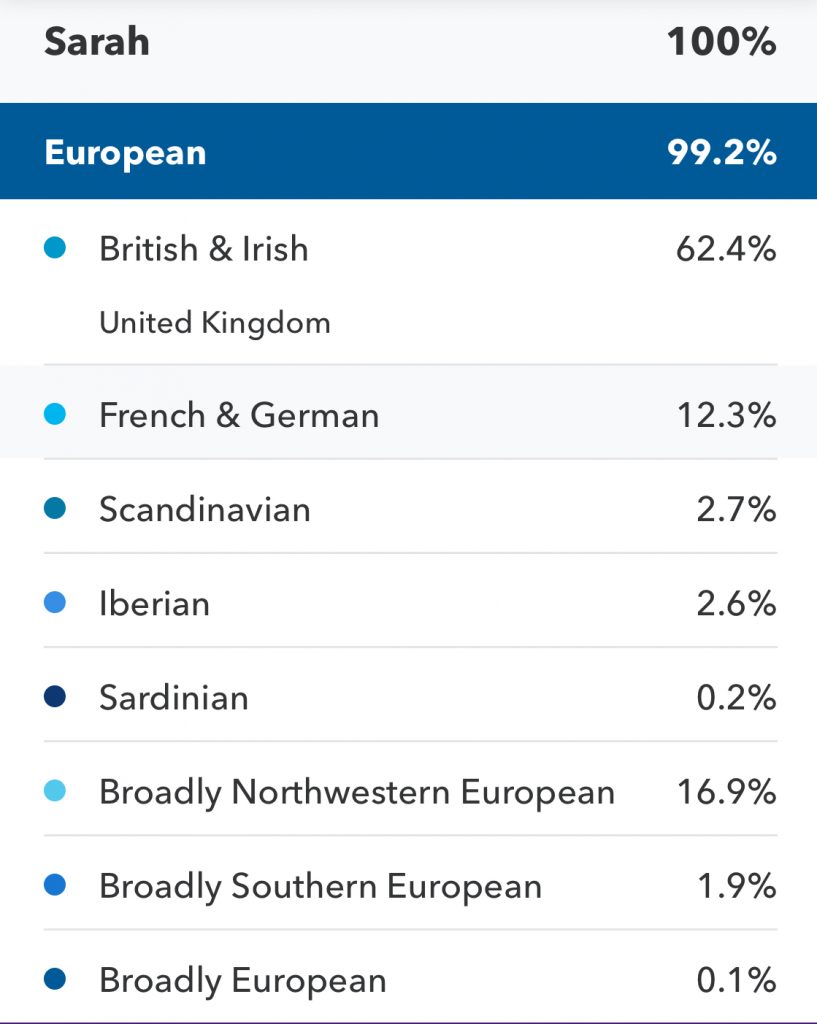 As you can see, my British/Irish/Welsh/Scottish percentage result is very close

This is pretty much the info you get with Ancestry, in addition to some timeline information and migration patterns. 23andMe gives you a lot more information, almost too much to take in. It takes a while to digest it all. For instance, it explains which generation your different DNA comes from, and how far back that is. For instance, with the Sardinian DNA, the information says that I most likely have a fourth, fifth, sixth, or seventh great-grandparent who was 100% Sardinian, and this person was most likely born between 1690 and 1780. I’d love to know who this ancestor is, since most of my family was in the United States by the 1600s.

It also gives you a pie chart that tells you how much of your ancestry you inherited from each of your parents. Here’s mine: 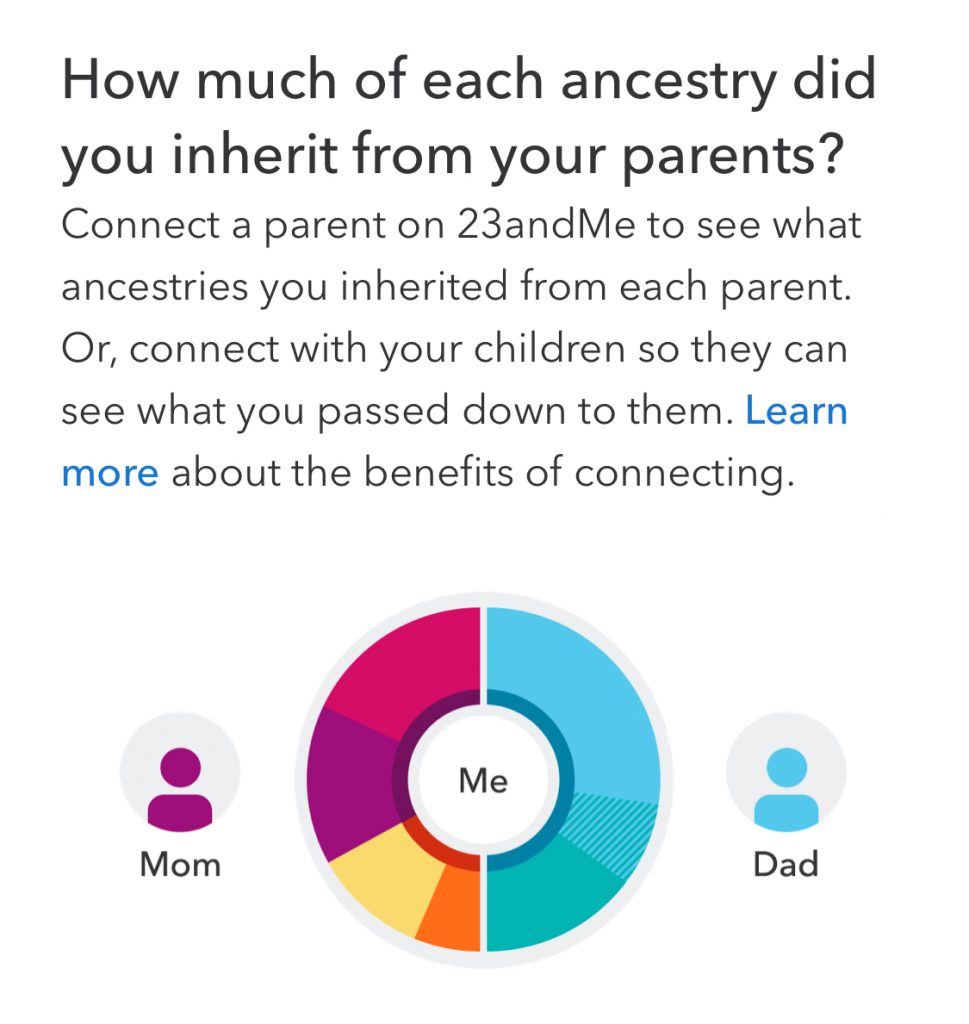 You can see I got more of my DNA from my dad.

It also gives you a breakdown of where your ancestors may have lived. Here is an example of that in my information: 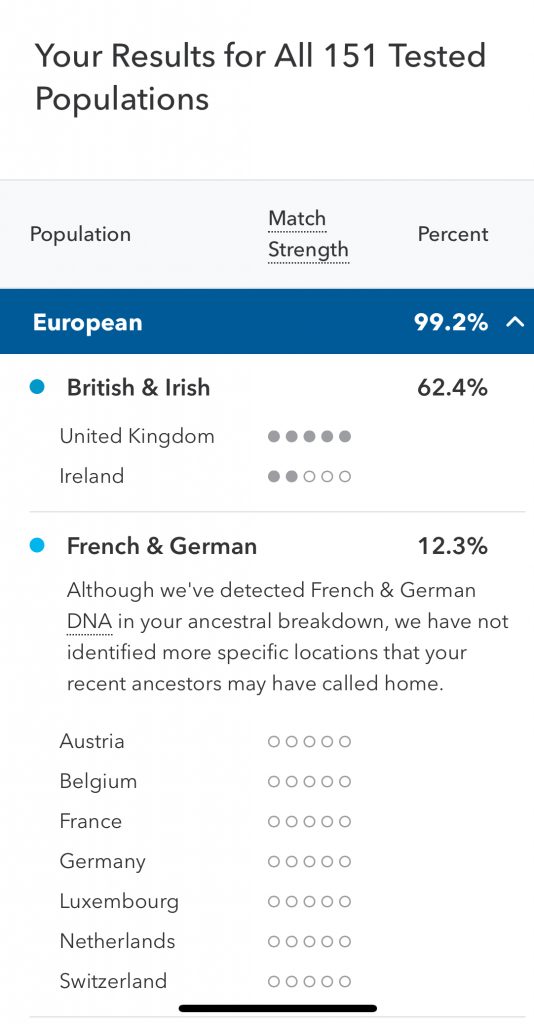 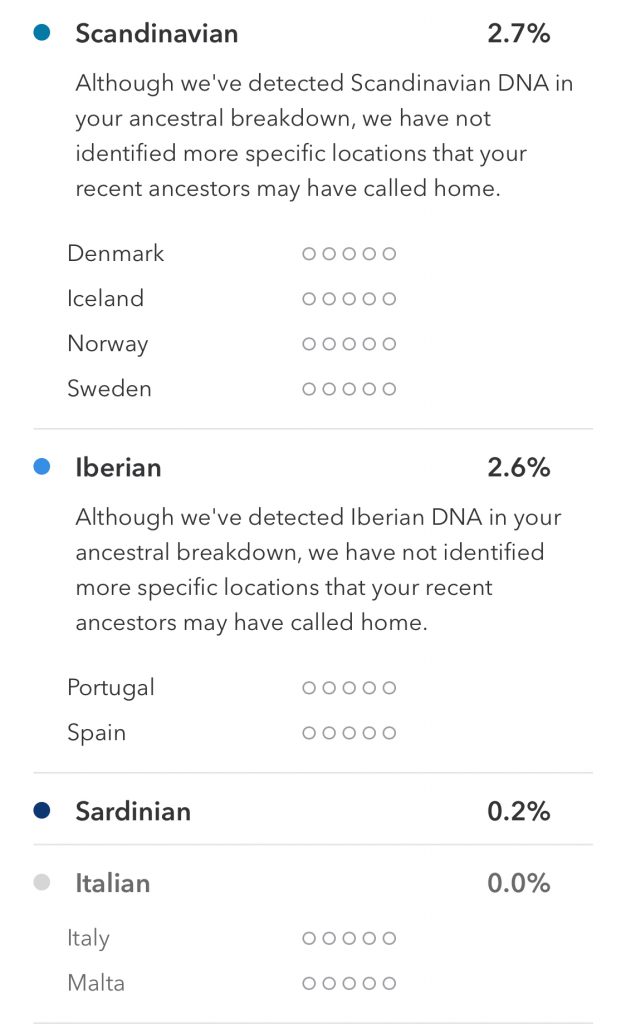 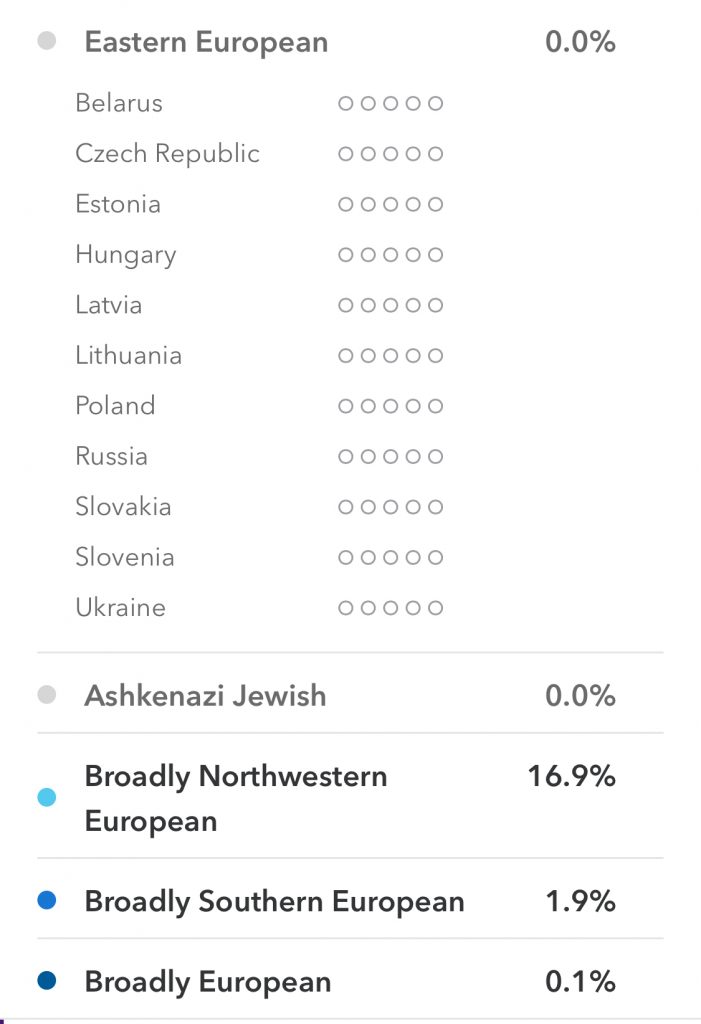 It also shows you where your DNA relatives, who are other people who have had their DNA tested, live: 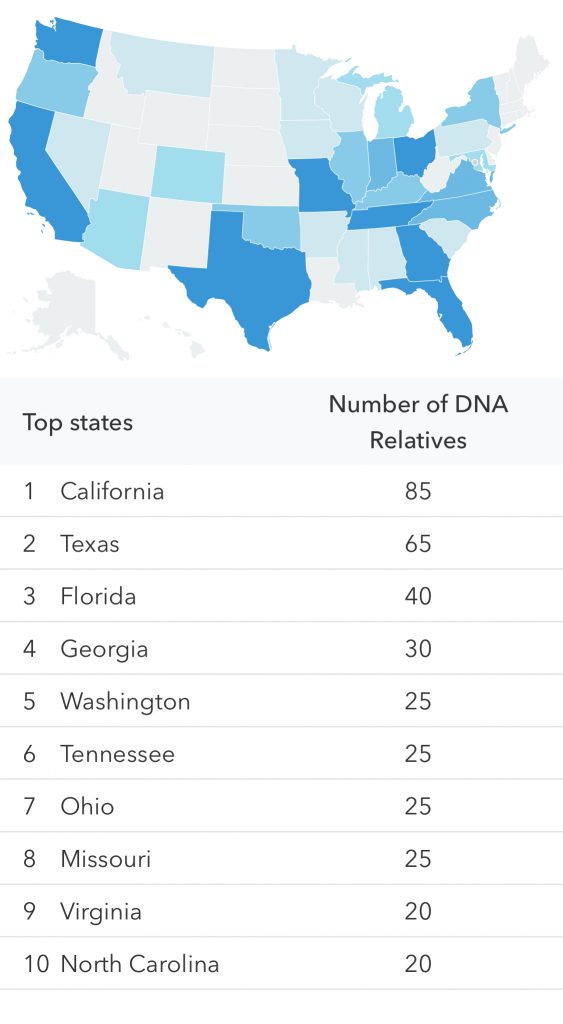 And it tells you how many DNA relatives you have with 23andMe: 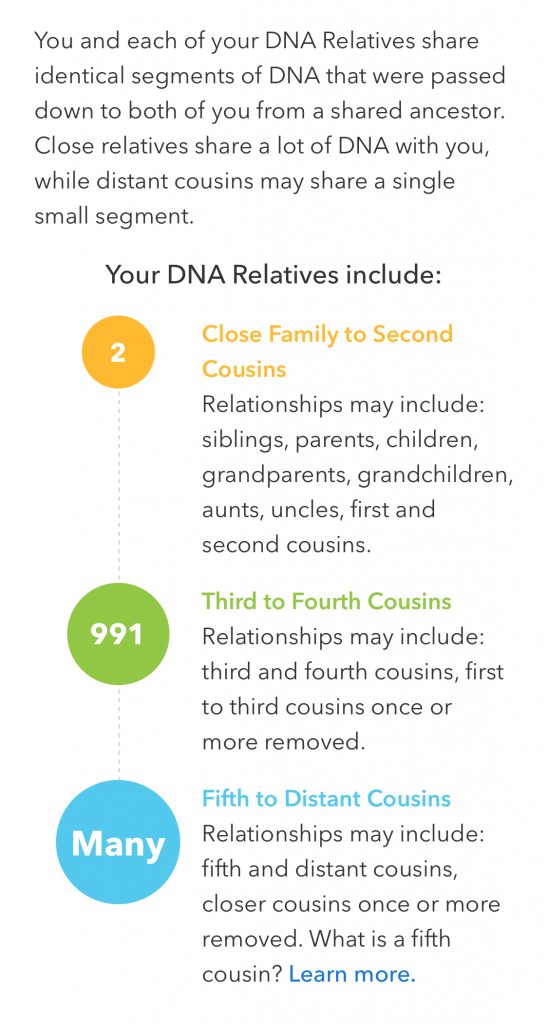 It also provides information on your haplogroup,  the group with which you share a common ancestor. The information indicated I am in an uncommon haplogroup, with 1 in 3,200 other 23andMe customers sharing my ancestor.

It also shows you the migration patterns of the ancestors in the haplogroup. This is where it might get a little interesting for someone with a religious background. It makes the assumption that everyone’s ancestor eventually ventured out of Africa. If your religious beliefs include creation and the Garden of Eden, which Christianity teaches was most likely located in Mesopotamia, (modern day Iraq) then this ancestor information may be different than what you’ve been taught. I read all this information with a grain of salt anyway, and don’t take any of it too seriously. 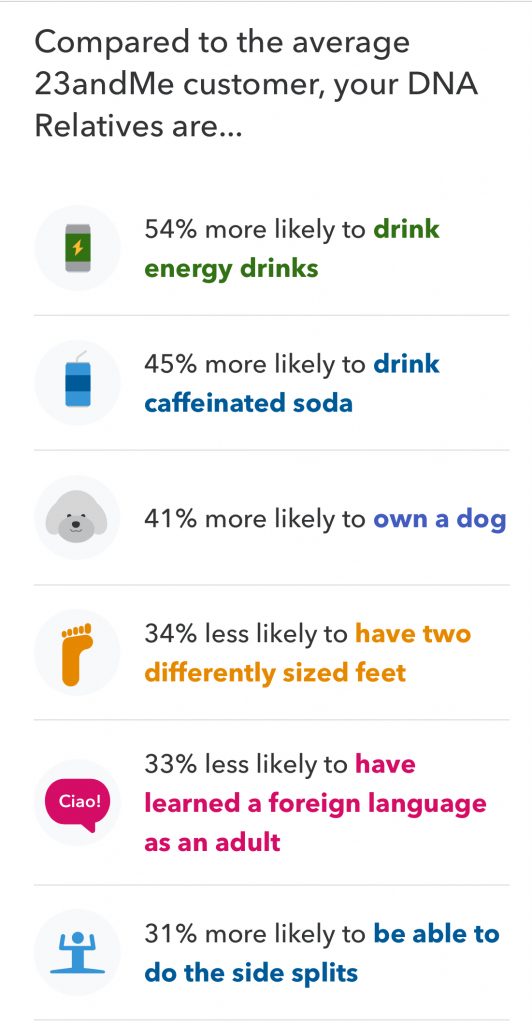 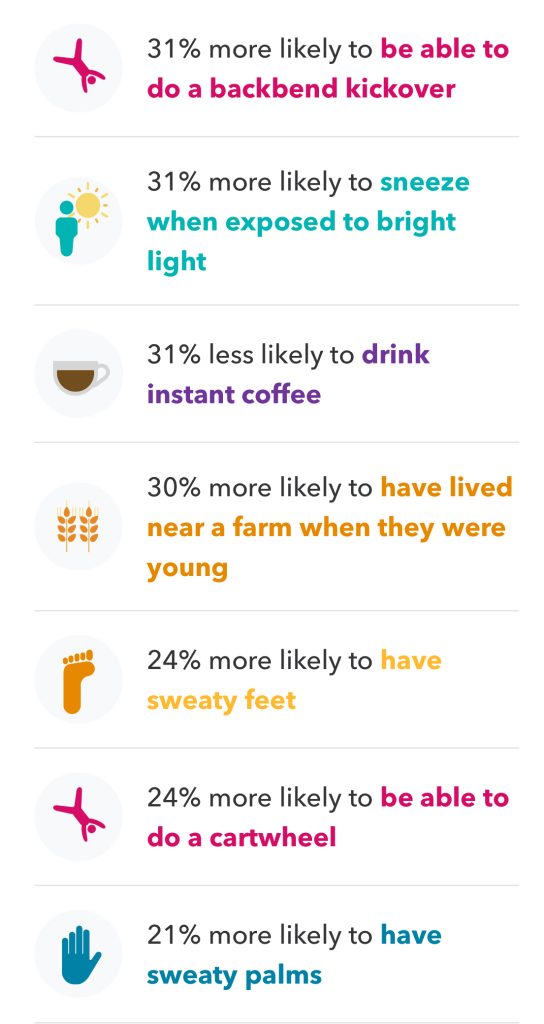 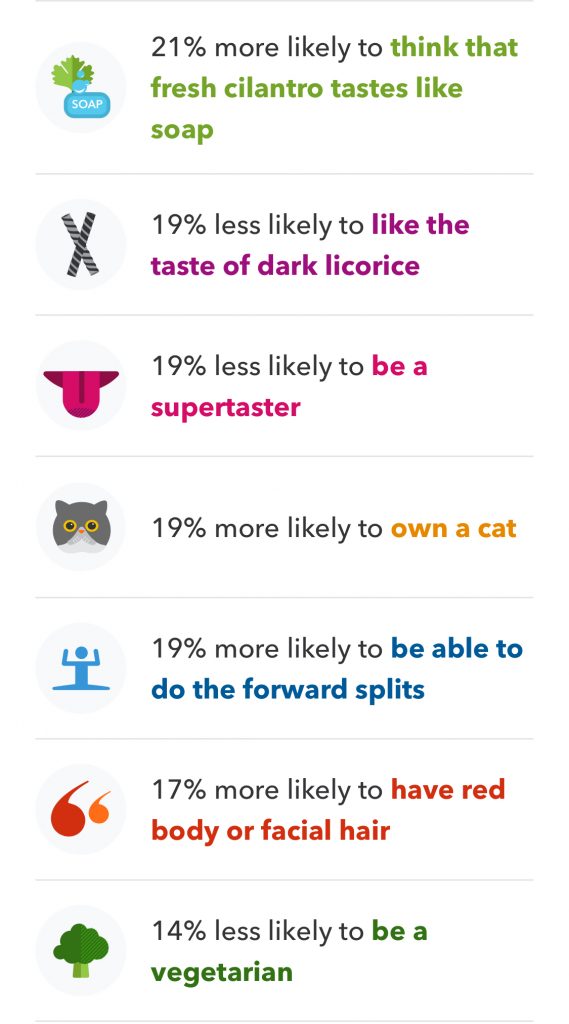 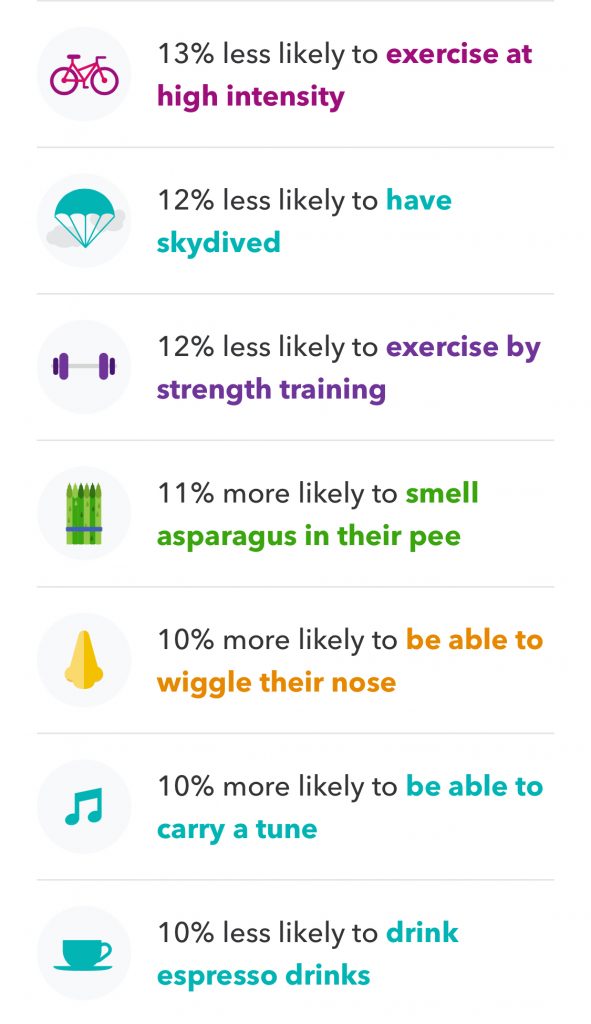 See? Grain of salt.  How do they know this stuff? Although they were dead on with me owning a dog and being able to smell asparagus in your pee after eating it. I totally relate. 🙂

The tests from both companies are very interesting and you can find out all kinds of stuff you never knew about your ancestors. We’re never exactly what we think we are. For instance, it seems like every family has some mysterious Cherokee woman ancestor that gets talked about a lot. Mine included. But I have no Native American DNA. None. So that story can go away. My husband and daughter have Native American DNA, so maybe she’s hanging out on that side of the family. 🙂

As far as the amount of information, I think 23andMe gives more bang for the buck, but as I said, it is almost TOO much info to digest. I imagine if you purchase the kit that also provides medical information, it would be even more overwhelming. So just take your time with it. I look at this information as informative and entertaining. If you come into this process from that point of view, it can only be a fun thing to do.

Now back to that Neanderthal DNA. According to 23andMe, the person who has tested with them with the highest number of Neanderthal variants has 397. Variants are determined by comparing an individual’s DNA with that of a reference genome, or set of chromosomes, to determine similarities.

I have 298 variants, which is more than 82% of the other 23andMe customers who have submitted DNA. 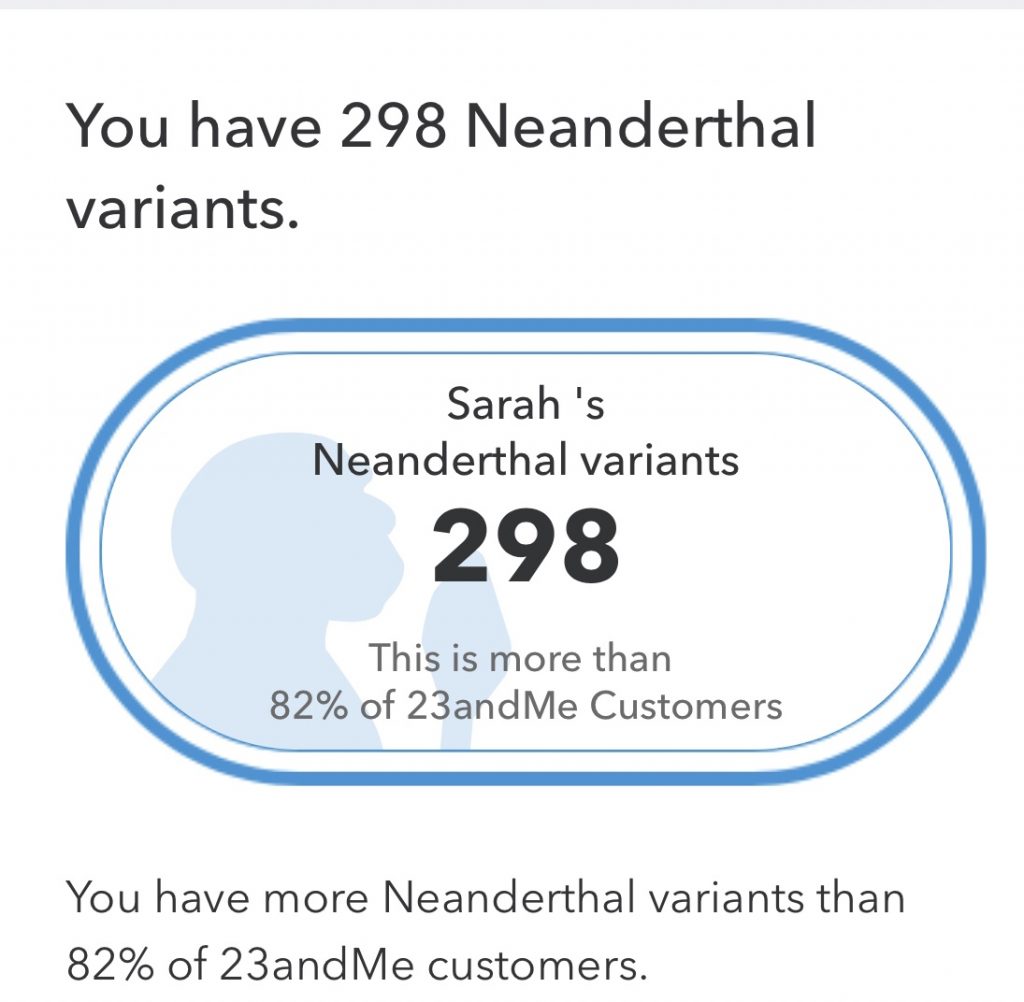 So now that I know that I am more Neanderthal than most people, I’m thinking I will use that information to justify any cavewoman behavior I decide to engage in. 🙂

What about you? Have you had your DNA tested? If so, did you find out anything that surprised you? Let me know in the comment section! 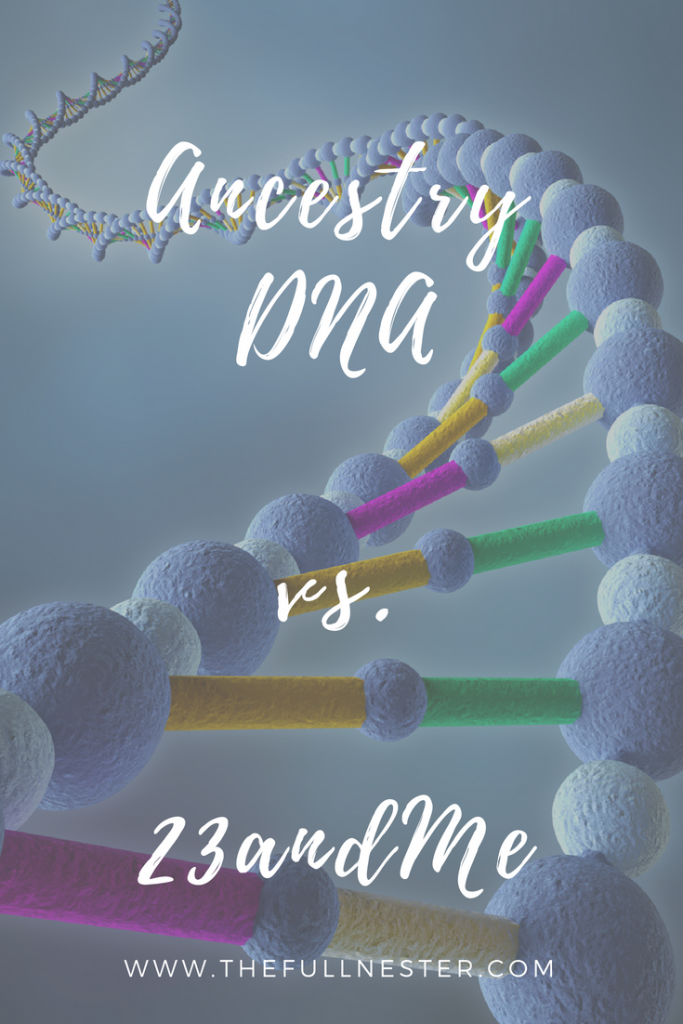