Why Don’t You Already Have Magnetic Lashes? 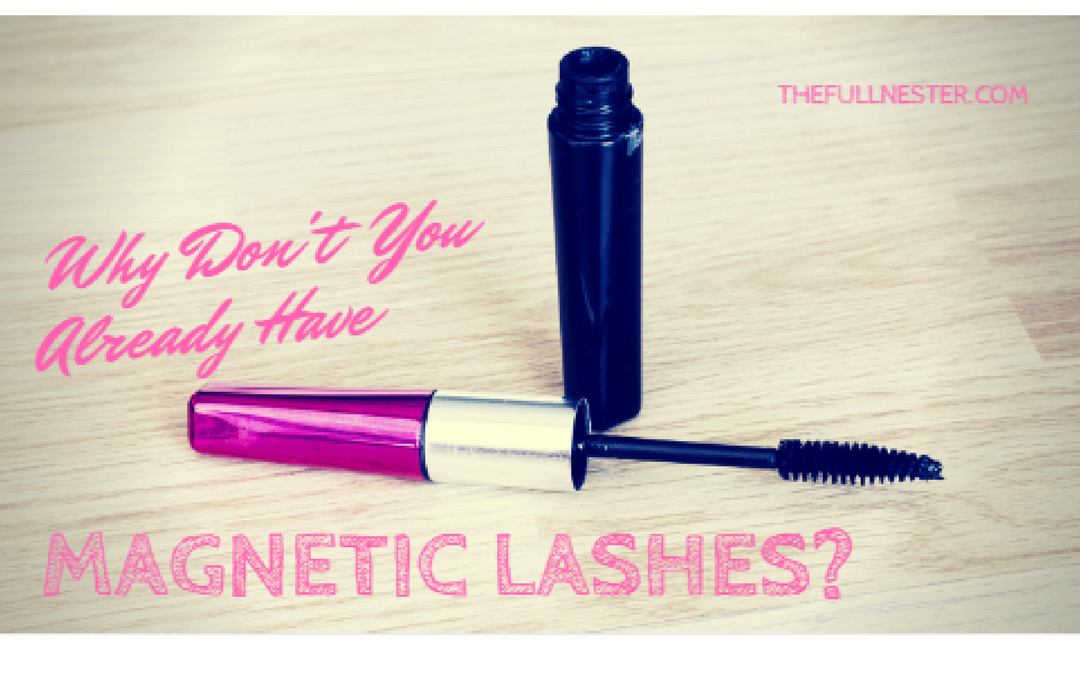 Forget Stephen Hawking. We have a REAL genius among us, and her name is Katy Stoka. She has invented the world’s first magnetic false eyelashes. When I saw these on The Today Show last year, I knew I had to have them.

I placed my order, along with apparently a lot of other women, because I had a long wait until I finally received them. I think I waited almost two months to receive them, but I did receive regular updates from Katy, explaining how they had received so many orders, and that they were working as fast as they could to ship them out. 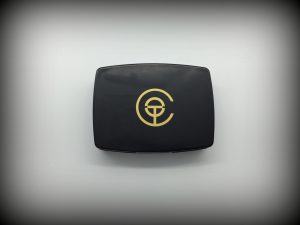 These lashes are made by OneTwo Cosmetics, and are called One Two Lash. The name comes from the ease of application. Only two steps to apply them, and off you go.

I have fairly long eyelashes to begin with because I have used lash serums for years. I started out using Latisse, which works beautifully but requires a prescription and that can be a hassle to get every time you need to reorder.

Then I switched to Babe Lash Eyelash Serum

, which is widely available. Many salons sell it and you can also purchase it on Amazon. It does not require a prescription, and it works really well to keep your lashes long with regular use.

But in my opinion, you can never be too rich or have eyelashes that are too long. 🙂 So when I found out about these magnetic lashes I was all in. 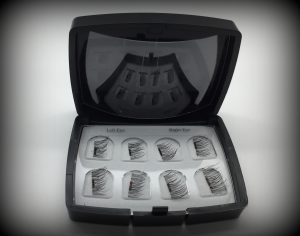 The lashes range in price from $59 to $69, depending on which set you choose. I was surprised to see that I received two sets of lashes for each eye in the set. I only expected one set per eye, so this was a nice surprise.

The compact is magnetic so the lashes stay in place while inside. I have always liked the look of false eyelashes but have never been very good at applying them. I don’t care for the mess of the glue.

So how do these work?

I must admit it wasn’t really as easy as “one two” steps for me. Especially on my right eye. The lashes on my right eye curl a bit naturally, which made it hard to properly place the top lash just where I wanted it.

The left eye went on with much more ease. I’m still working on getting the right eye to work on the first try. Some of you gals may take to these right away and have no issues at all. Others may need a little practice to apply them properly.

My recommendation would be to practice with them when you don’t have any place to be. Trying them for the first time five minutes before leaving for a big event might not be the best idea. There are video tutorials on the One Two Lash website to help you learn how to apply the lashes. 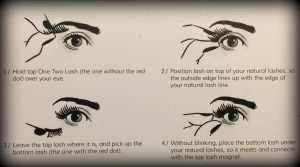 How do you remove them?

Removing the lashes could not be easier. You simply place your thumb and index finger on the lashes and gently slide the two magnets away from each other. The lashes easily release from each other and you can then slide them off of your own lashes. No pulling, no messy glue, nothing. Then you just return the lashes to the storage compact.

I took a picture while wearing the One Two lashes so you can see what they look like, and the black and white is just for fun. So dramatic. 🙂 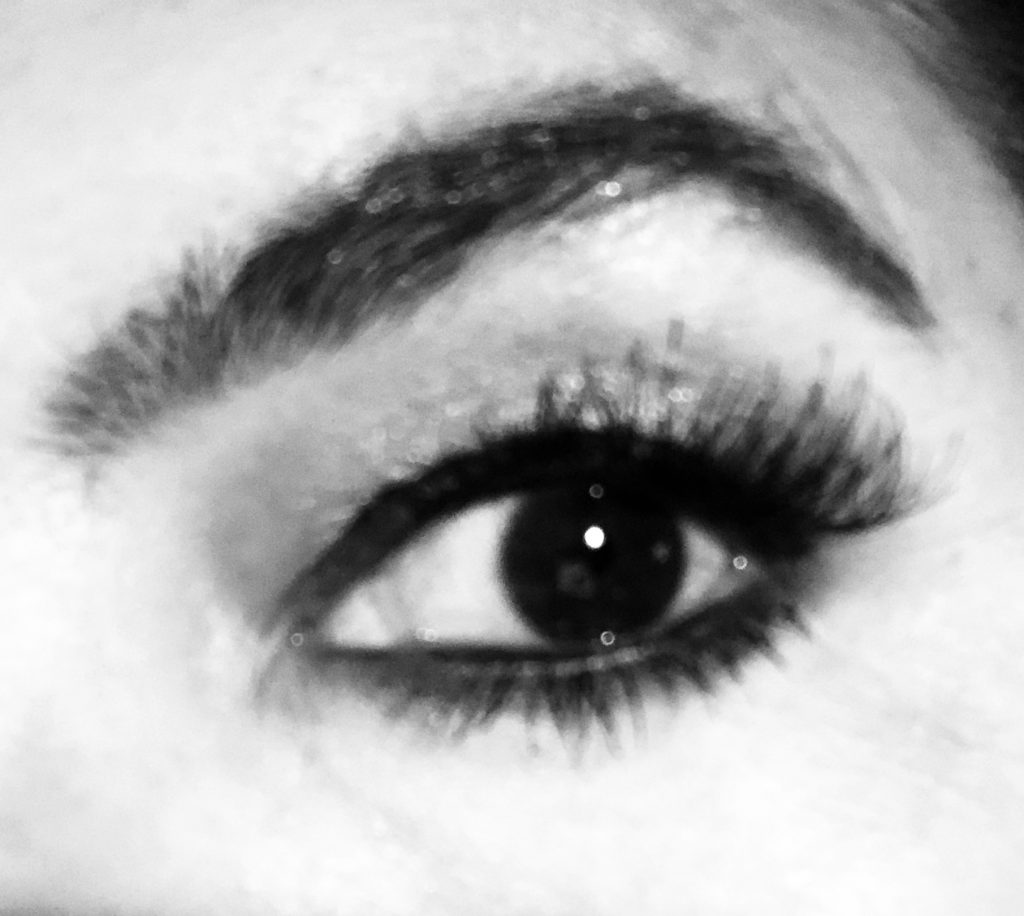 So what do I think of these magnetic lashes?

My verdict on the One Two lashes. I LOVE the idea of being able to quickly apply and remove lashes without glue. I’m pretty sure I’m not as adept as others at applying lashes, so I’m going to need more practice before these are as easy as one, two for me. But I’m going to keep trying so that I can pop these babies on at a moment’s notice and then out the door!

Once I get really good at applying the lashes, I think I’m going to love the convenience they offer. I think the fact that there is no glue involved means these lashes will have a longer lifespan than the kind you glue on. And getting two sets in the compact is also nice. 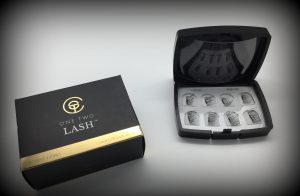 I’d love to hear what you think of the idea of magnetic lashes. Do you have them? Do you plan to get some? Let us know in the comment section!

P.S. I’ve since posted an update you can read about the new full coverage magnetic lashes. Check it out! 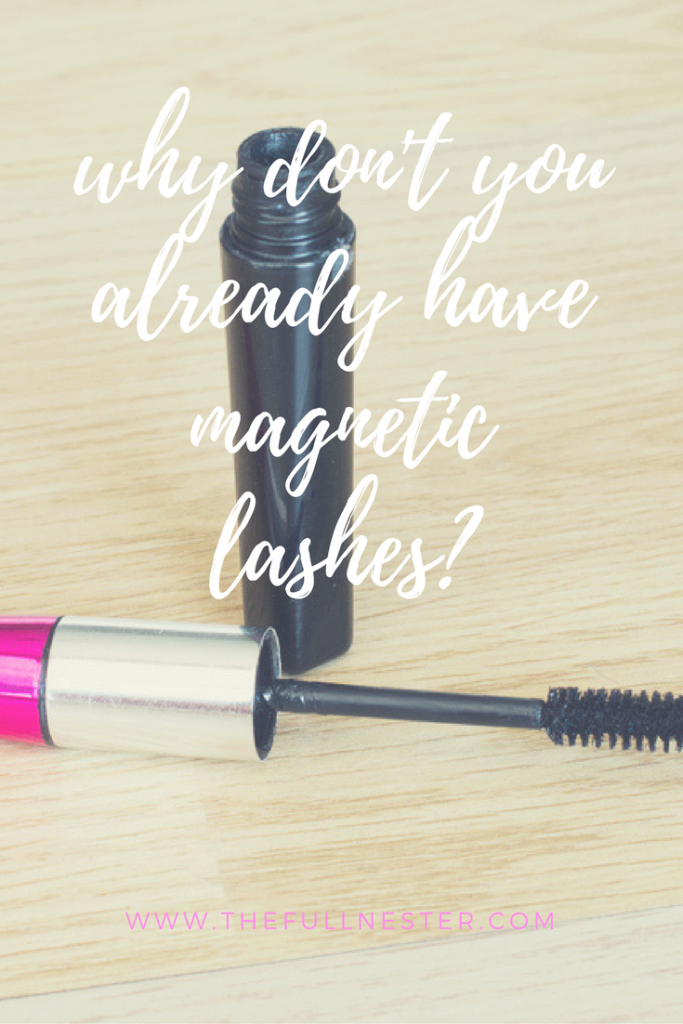