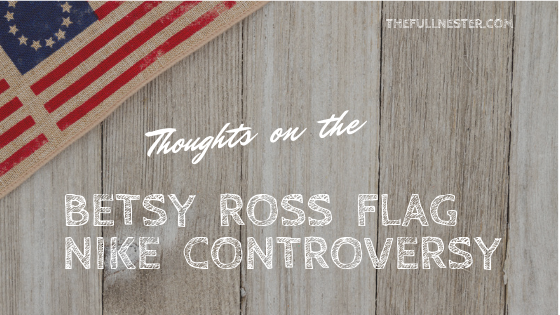 I hesitate to wade into it, but we need to talk about this. Last week, Nike released a new athletic shoe that featured what is known as the Betsy Ross Flag, presumably timing the shoe release with Independence Day. 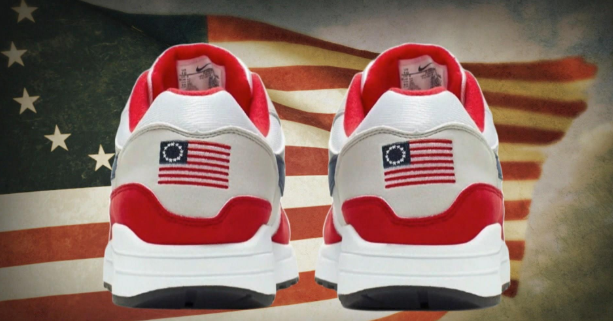 Then Colin Kaepernick, the former quarterback for the San Francisco 49ers, called on Nike to withdraw the shoe, as the flag depicted on the heel could be considered offensive to some because it represented a period in history that included slavery.

Nike quickly capitulated and withdrew the shoe. Some were pleased at the company’s decision, others were not.

Let’s back up a bit and get some backstory on all of this.

Betsy Ross was a Philadelphia seamstress who lived from 1752 to 1836 and made flags during the American Revolution. Whether true or apocryphal, the story goes that George Washington himself visited her in 1776 or 1777, seeking assistance in designing a flag for the new nation. 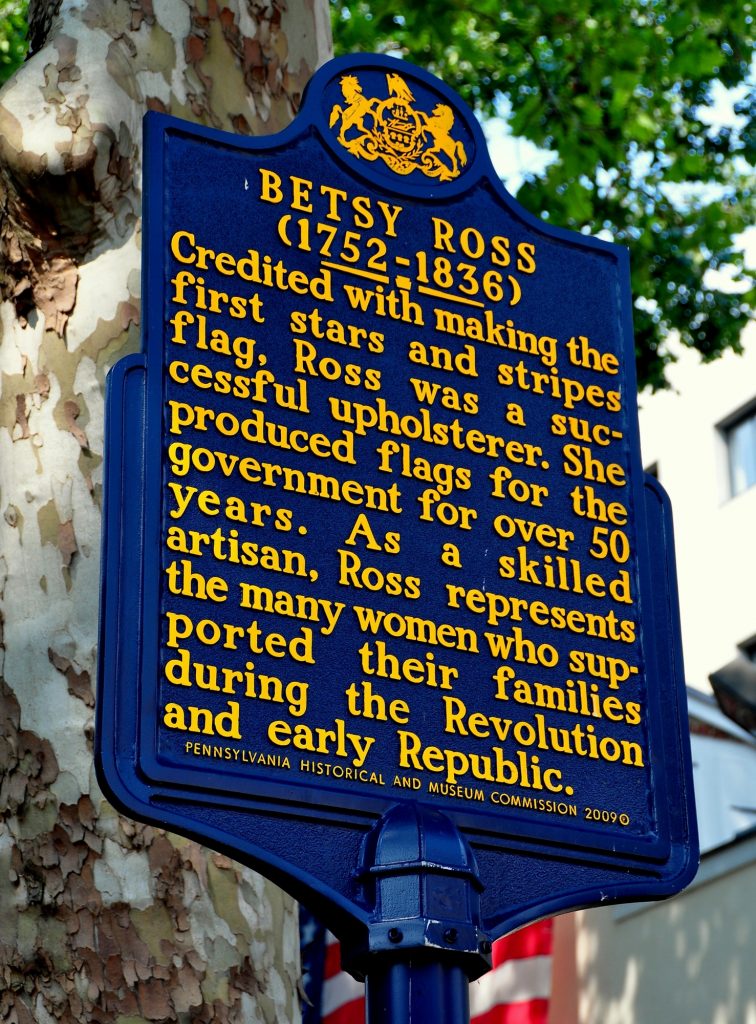 The flag design that became known as the “Betsy Ross Flag” featured thirteen stripes, alternating in red and white, and a circle with thirteen white stars on a blue background. The thirteen stars and stripes, of course, represented the thirteen original colonies. 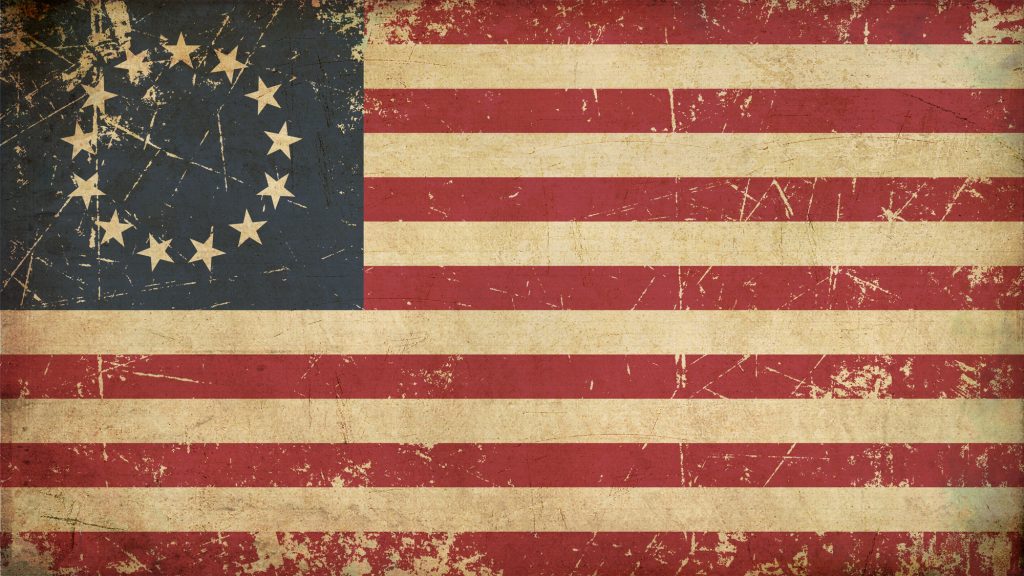 While it is true that slave ownership existed during the Revolutionary War period, it is not believed that Betsy Ross was a slave owner. She had a Quaker upbringing, and Quakers were traditionally Abolitionists.

Next up, Colin Kaepernick.

He is the former NFL quarterback who began refusing to stand during the National Anthem prior to the start of games in 2016. He initially stated that his actions were a protest of police brutality, racial injustice, and oppression.

The protest widened as other players joined in sitting or kneeling during the anthem. President Trump weighed in, encouraging NFL team owners to fire players who protested the anthem.

Kaepernick explained his position by stating,  “I am not going to stand up to show pride in a flag for a country that oppresses black people and people of color. To me, this is bigger than football and it would be selfish on my part to look the other way. There are bodies in the street and people getting paid leave and getting away with murder.”

He said he would continue to protest until the American flag represented what it was supposed to represent. He did eventually kneel during the anthem as opposed to sitting, reportedly out of respect for members of the military.

NFL game viewership suffered as a result of Kaepernick’s actions. Many fans were angered and expressed the desire that he be released from the team. He was released from the 49ers and became a free agent at the end of the 2016 season. He remains unemployed by the NFL.

He became a spokesperson for Nike, and became the face of their famous “Just Do It” campaign on its 30th anniversary with an ad that encouraged everyone to stand for something, “even if it means sacrificing everything.”

Next, on to the flag.

As mentioned before, the flag was designed to represent the original thirteen colonies. There have been allegations that it, along with other flags, has been associated with radical groups such as white nationalists. 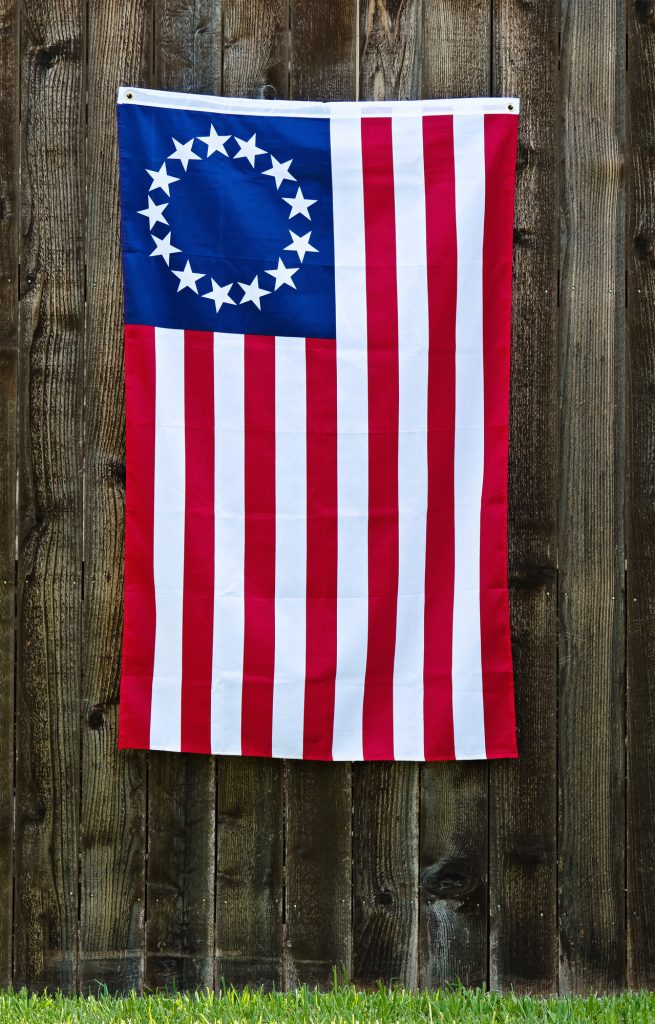 However, the Anti-Defamation League maintains a database of more than 150 so-called hate symbols, and reported this week that the Betsy Ross Flag was not among them. They acknowledged that it had been used on occasion by radical groups, but that the League considered it to be a historical flag rather than a hate symbol.

While slavery did exist at the time of the American Revolution, can we make the jump that a flag adopted to represent the new nation necessarily represented slavery merely because it coexisted at the same time as slavery?

The director of the Betsy Ross House in Philadelphia stated that she had never heard of the flag being used as a symbol of hate. “Personally, I’ve always seen it as a representation of early America,” she told the Associated Press. “The young nation was not perfect, and it is still not perfect.” 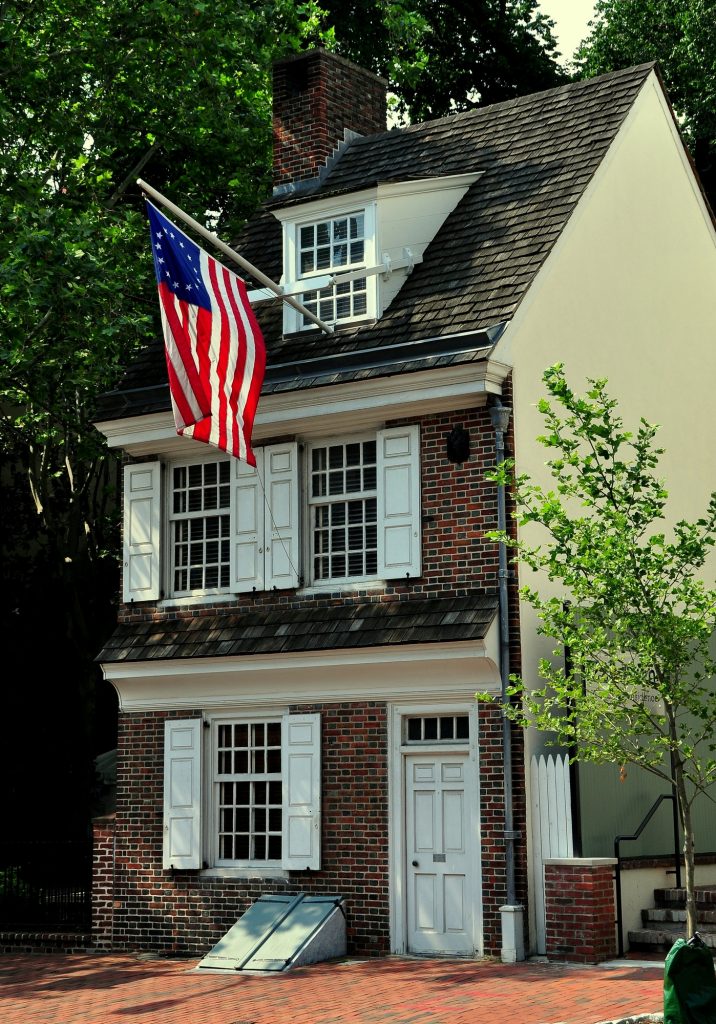 Nike stated that they “made the decision to halt distribution of the shoes … based on concerns that it could unintentionally offend and detract from the nation’s patriotic holiday.”

Yet pulling the shoe did exactly that. All the talk last week was about that shoe.

Several politicians commented on the subject, with Texas senator Ted Cruz saying “It’s a good thing Nike only wants to sell sneakers to people who hate the American flag.”

“Instead of celebrating American history the week of our nation’s independence, Nike has apparently decided that Betsy Ross is unworthy, and has bowed to the current onslaught of political correctness and historical revisionism,” wrote Arizona Gov. Doug Ducey on Twitter, who said he was pulling funds earmarked for Nike for adding jobs in the state.

Conversely, New Mexico’s governor made it clear that they were ready and willing to do business with Nike, and many on social media praised Nike’s decision.

So where does all of this leave us?

Kaepernick may have actually felt passionate on this issue, or just may have been looking to extend his relevancy. He has not played football in a while, and has accused the NFL of snubbing him because of his beliefs.

However, there are some who say he was released from the league because he just wasn’t that good. He may have a point about teams shying away from him for his beliefs, as he did take his team to a Super Bowl. An argument could probably be made for both scenarios.

He started out protesting oppression. He got to play a sport that he loved. And was paid handsomely to do so. I would argue there are many people who wouldn’t mind being as financially “oppressed” as he is. 🙂

And there are many who contend that Nike uses the equivalent of “slave labor” to manufacture their products, so he might want to ponder the fact that he is a spokesman for a company with a reputation of worker oppression.

He now seems to have broadened his platform to include slavery. I think the biggest hit to his cause came later last week when photos surfaced of President Obama’s inauguration. The decorations included none other than the Betsy Ross Flag. 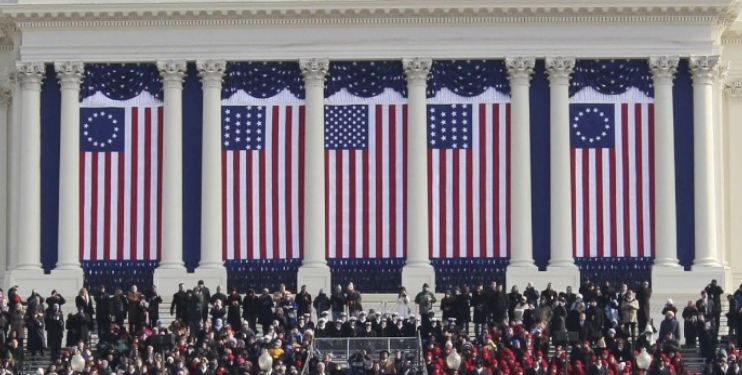 So is this flag offensive now but it wasn’t then? If it signifies slavery, why would President Obama include it in his inauguration? Is there a lack of historical knowledge here? If so, with whom–Kaepernick or President Obama? My money would be on Kaepernick.

It’s also a bit problematic for the argument that the flag recalls slavery that Betsy Ross was not a slave owner, and raised as a Quaker, was most likely an Abolitionist.

I also found it interesting that several people who are of the same race as Kaepernick disagreed with him. Most notably, Dr. Alveda King, who is the niece of Martin Luther King, Jr. She told Fox News that “I am not so sure brother Kaepernick even totally understands who Betsy Ross is. It’s kind of unfortunate that we are fighting over sneakers when we should be celebrating living in the best country on the planet.”

Dr. King said that she found the shoe appealing and that she thought it was unfortunate that the situation was used to further divisiveness.

I personally think that we have become so shrill as a country and are always looking for a fight. We’ve lost our ability to be civil to one another and rationally discuss the issues.  We cannot seem to have opposing viewpoints on anything without viewing one another as the enemy.

Political correctness has just gone berserk and everyone is offended by everything. I sometimes wonder if people are actually offended by something or have to be told that they should be offended.

Were that many people offended by the sight of the Betsy Ross Flag on a pair of shoes? I do not have ancestors who were enslaved in my past, so I am not in a position to know how others who do are affected by symbols and imagery from that era.

What are constructive ways we can address viewpoints? I don’t happen to think it is by scrubbing our history of everything we find unpleasant. It is by facing it.

I think this is one thing the Jewish people have done very well. They have not tried to gloss over the horrors of the Holocaust. No revisionist history at work here. They force us to confront what happened. They make us look at it.

Their museums are full of images and artifacts of the unspeakable brutality they endured. Rather than destroying them, they have kept the structures that were once concentration camps and use them as places to teach visitors that what happened there must never happen again.

Deciding that a flag that was created for a nation during an era that also coincidentally included slavery and therefore should be shunned is rash. It is as if by removing all traces of a history, the history itself would cease to exist.

That just simply isn’t true. George Washington was a slave owner. Are his contributions as our first president null and void? Thomas Jefferson was a slave owner. Do we toss the eloquent expression of the Declaration of Independence in the trash? Why can’t the people, imagery and symbols from our past be used to teach where we started as a country, where we have been, and where we hope to go?

Just for the record, I think Colin Kaepernick may have felt strongly about this issue, but needs to spend what must be ample free time reading up on history. I think he was out of line to suggest that Nike withdraw the shoe from the marketplace. I think Nike missed an opportunity to educate and engage in civilized dialogue on the issue of historic imagery.

I think we all need to calm down and TALK to each other. Let’s stop all the screaming. I like what Dr. Alveda King said. “Unfortunately, Nike decided to join in a fight, in a struggle, that further divides rather than reconciles,” she said. “I think love always wins the day, but we have to get there.”

Until we stop viewing each other as the enemy, I don’t see a way to progress. We need to be able to engage with one another rationally, starting with our own small individual groups of influence. And then move into a national conversation that analyzes and respects all viewpoints on a subject to find common ground.

The anthropologist Margaret Mead said,  “Never doubt that a small group of thoughtful, committed citizens can change the world; indeed, it’s the only thing that ever has.” 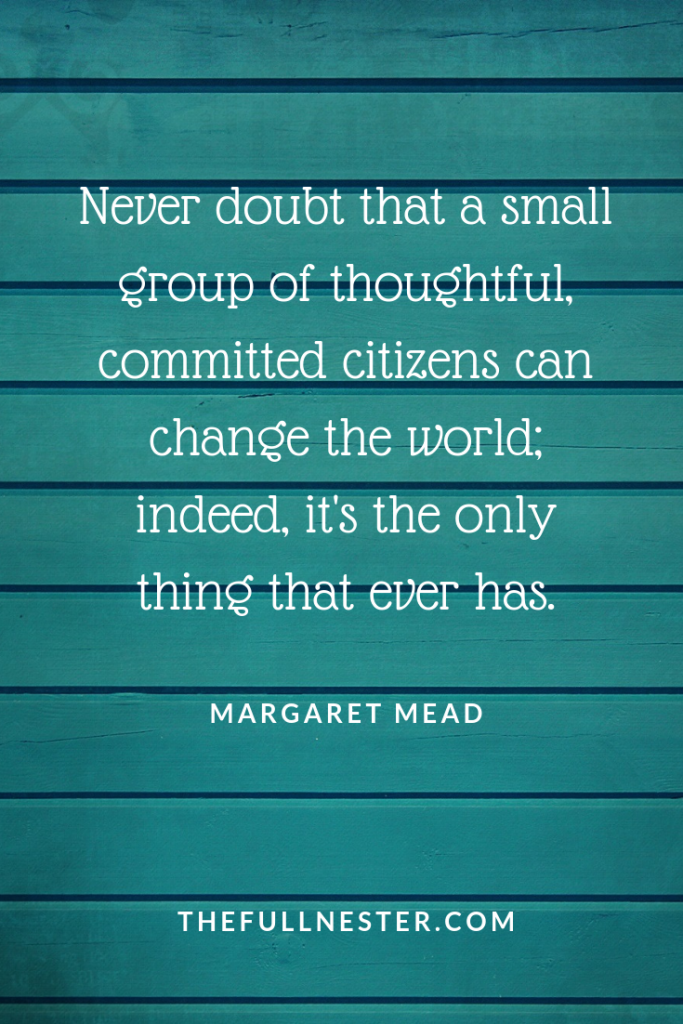 I know this is a powder keg topic. I would love to hear your thoughts on the subject. Please feel free to join the conversation in the comment section. But please keep it classy, civil, and well thought out. 🙂 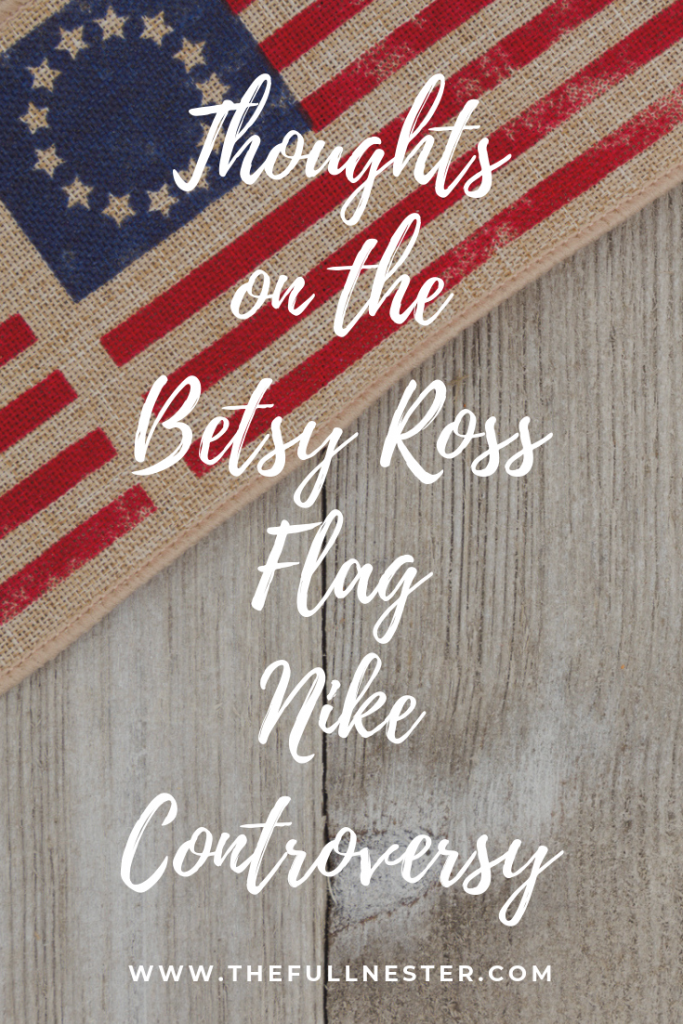