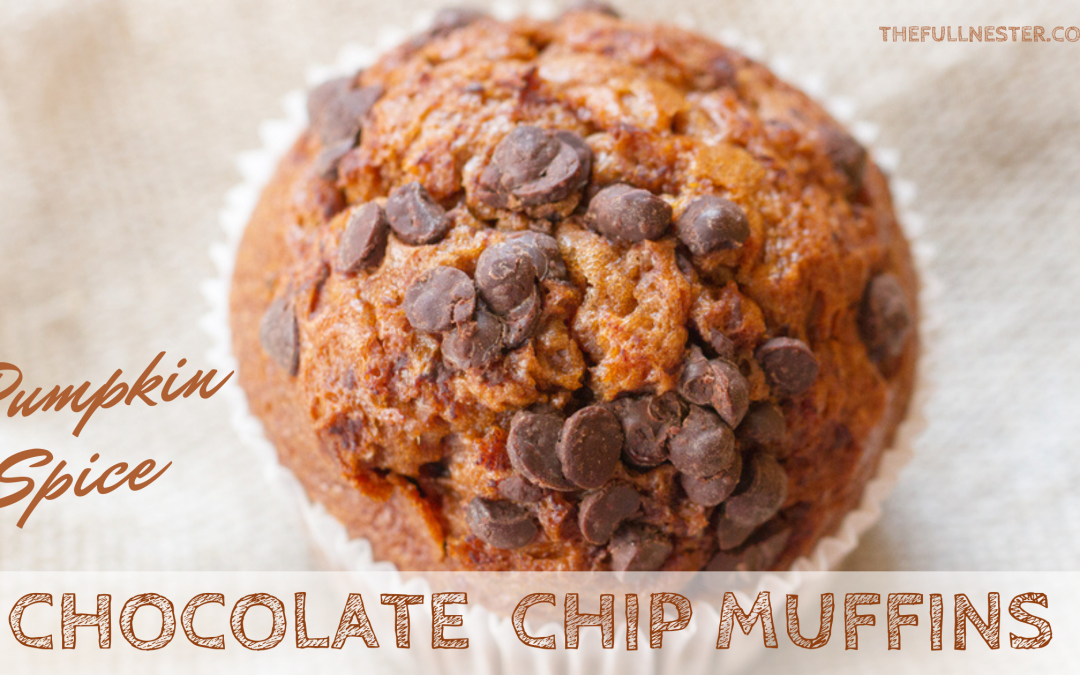 I’ve been baking a lot of pumpkin spice muffins these past few weeks. ‘Tis the season! 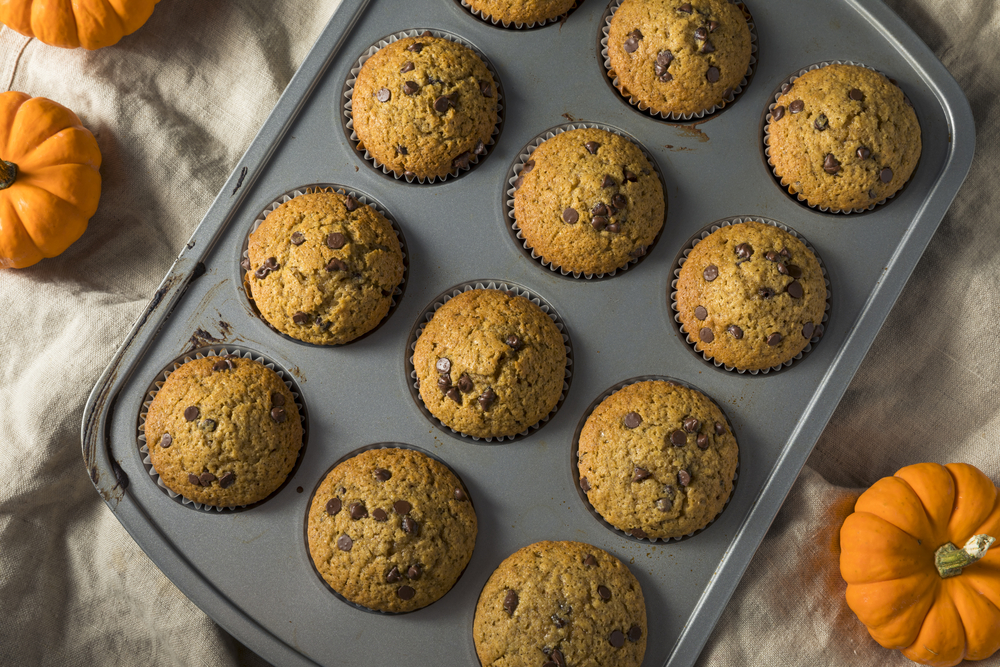 I mentioned recently how I am not a fan of almond flour, which seems to be the go-to flour for low-carb baking. It has a sandy texture and if I want to eat sandy treats I will just go ahead and move to my beach house I don’t yet have. 🙂

My birthday was last month and I was so averse to almond flour I decided I was NOT going to eat a birthday cake made with it. I decided I would make a regular GOOD chocolate cake, but rather than make a large single cake, I made a bunch of little individual cakelets.

I was also inspired to create a printable for my fellow low-carb eaters out there: 🙂 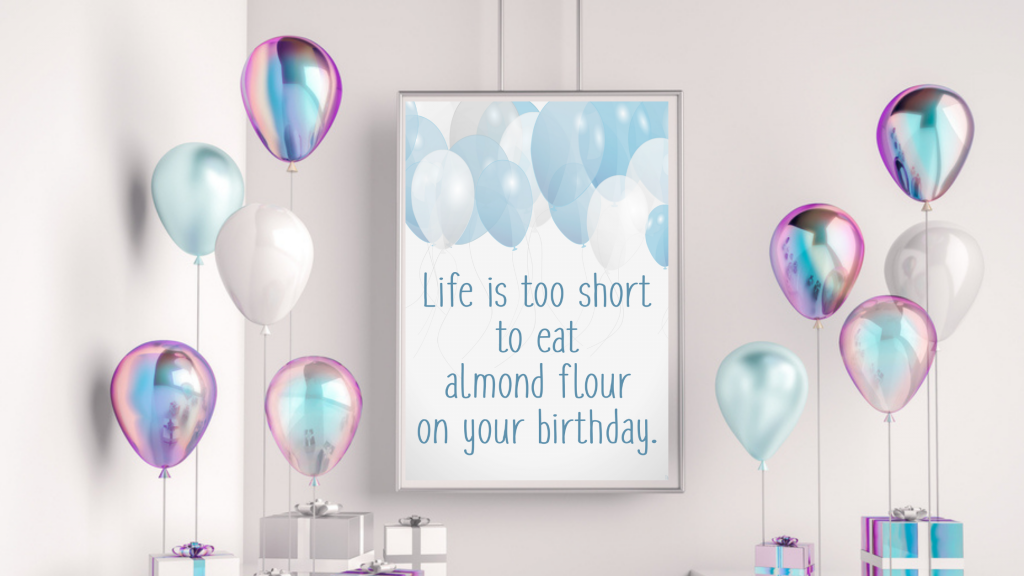 I think my feelings can best be expressed by Julia Roberts in that cinematic masterpiece Steel Magnolias  🙂 when she was having an argument with her mother, played by Sally Field.

Because of her health issues, Julia’s character was advised not to have children. Yet she was pregnant and her mother was not happy about it, telling her it could cut her life short.

But she was undeterred.

Julia’s character says, “I’d rather have 30 minutes of wonderful than a lifetime of nothing special.” 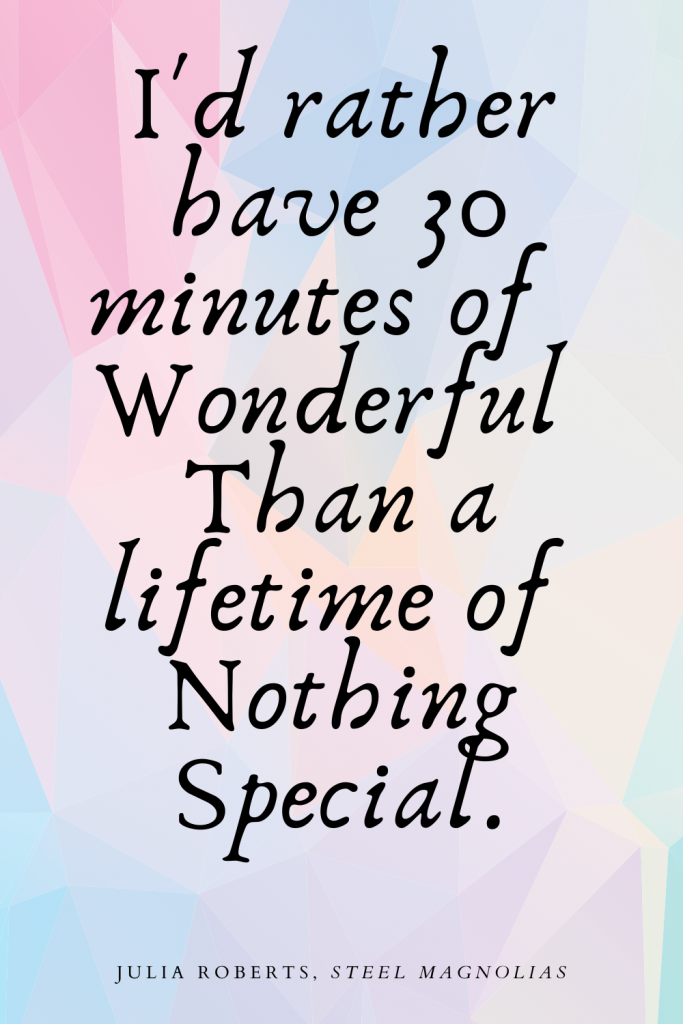 That’s how I feel about eating stuff made with almond flour. 🙂

When pumpkin spice season rolled around, I decided to do the same small cake thing. Mainly because I found an ENORMOUS baking pan, at the grocery store of all places, that would allow me to make bite-size treats without almond flour.

This thing is huge, and it bakes 48 mini muffins at a time. These types of pans are readily available online. 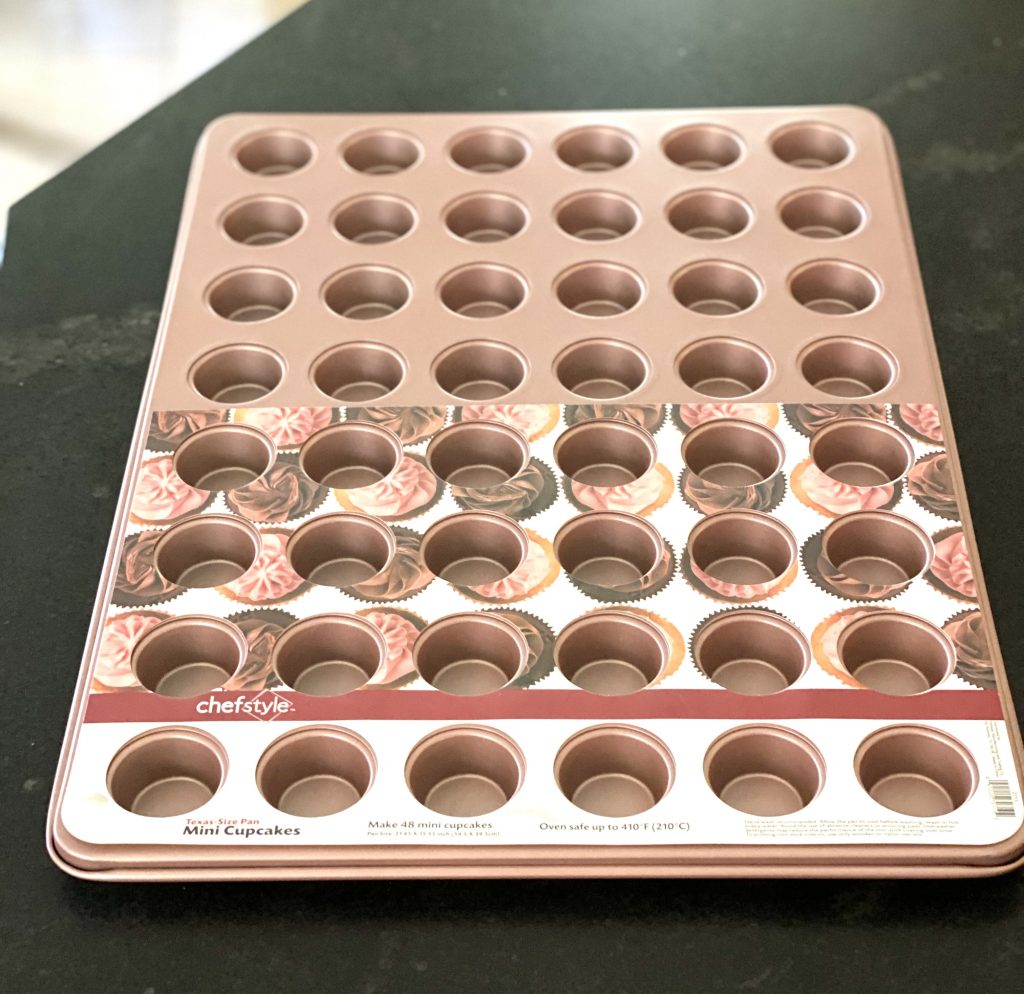 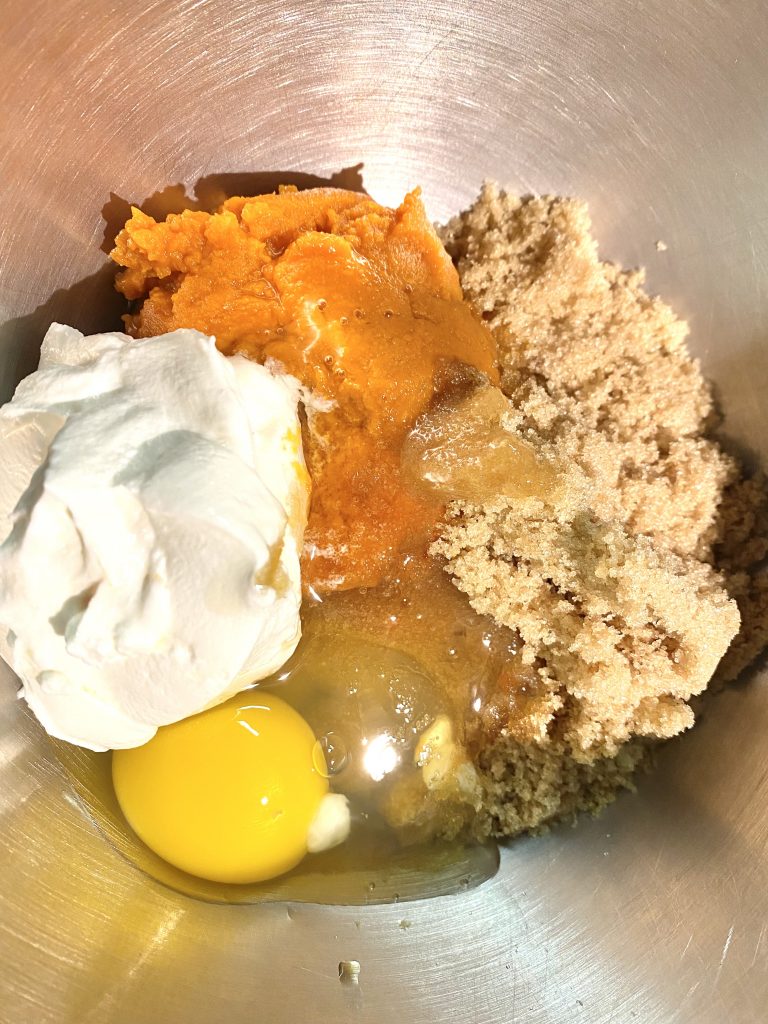 Mix the wet ingredients together: 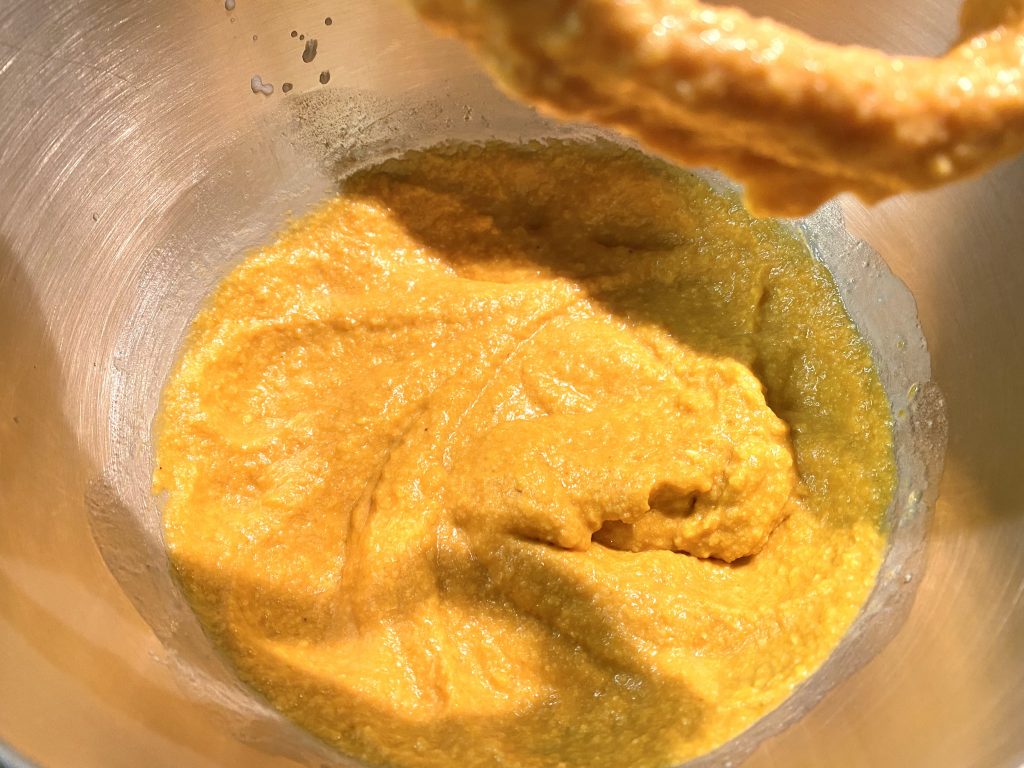 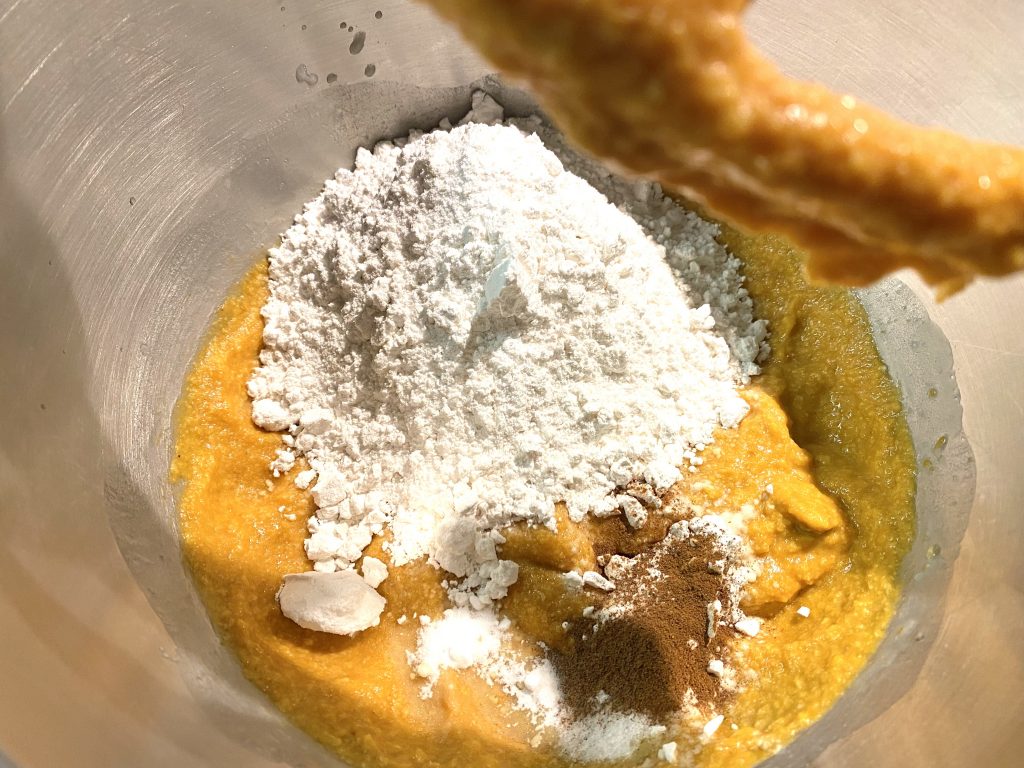 Mix and add the chocolate chips: 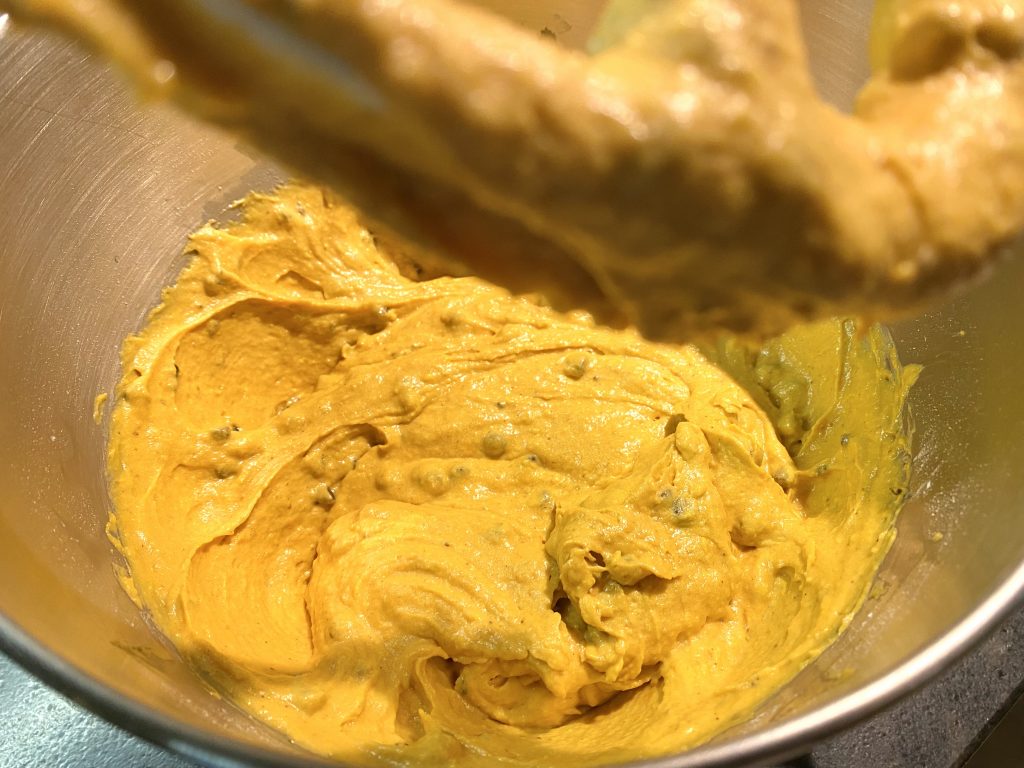 That’s it! This recipe made the PERFECT amount to fill a 48 mini muffin pan: 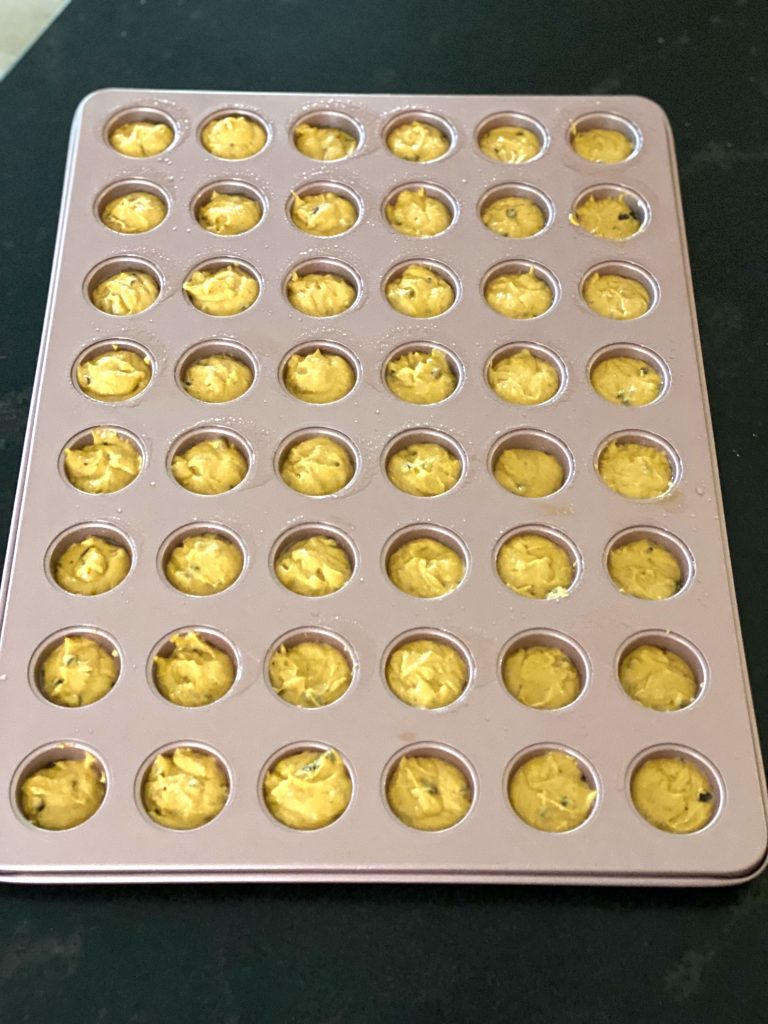 I was a little skeptical that this pan would fit in my oven. It did. 🙂 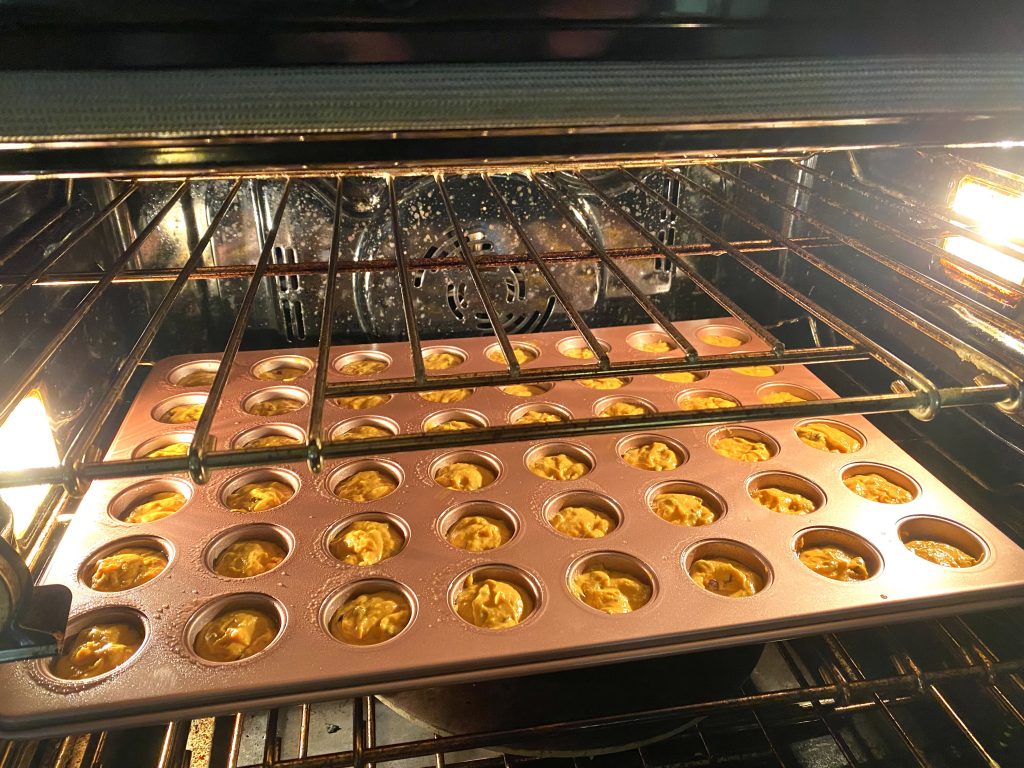 I do have to store the pan in a closet though because it does not fit in a drawer or cabinet.

Bake for 12-15 minutes. The best part about this pan is that after that 15 minutes, you’re done! No baking in multiple batches. So if you have limited time, this thing could change your life. 🙂 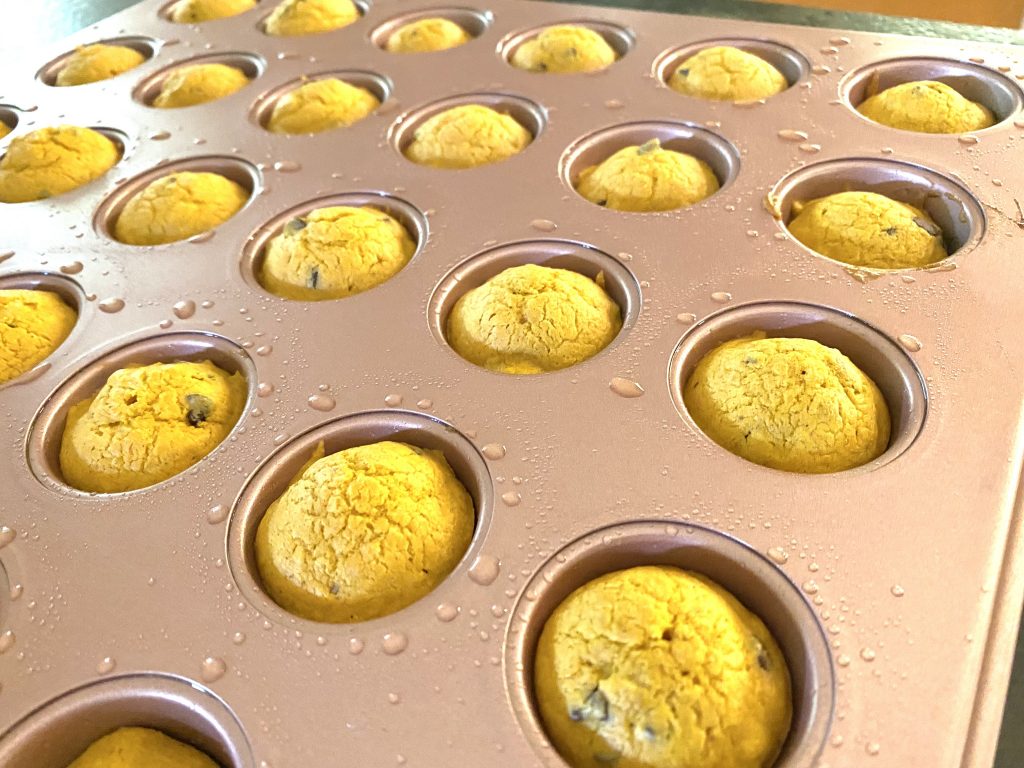 They are so cute and bite-sized! 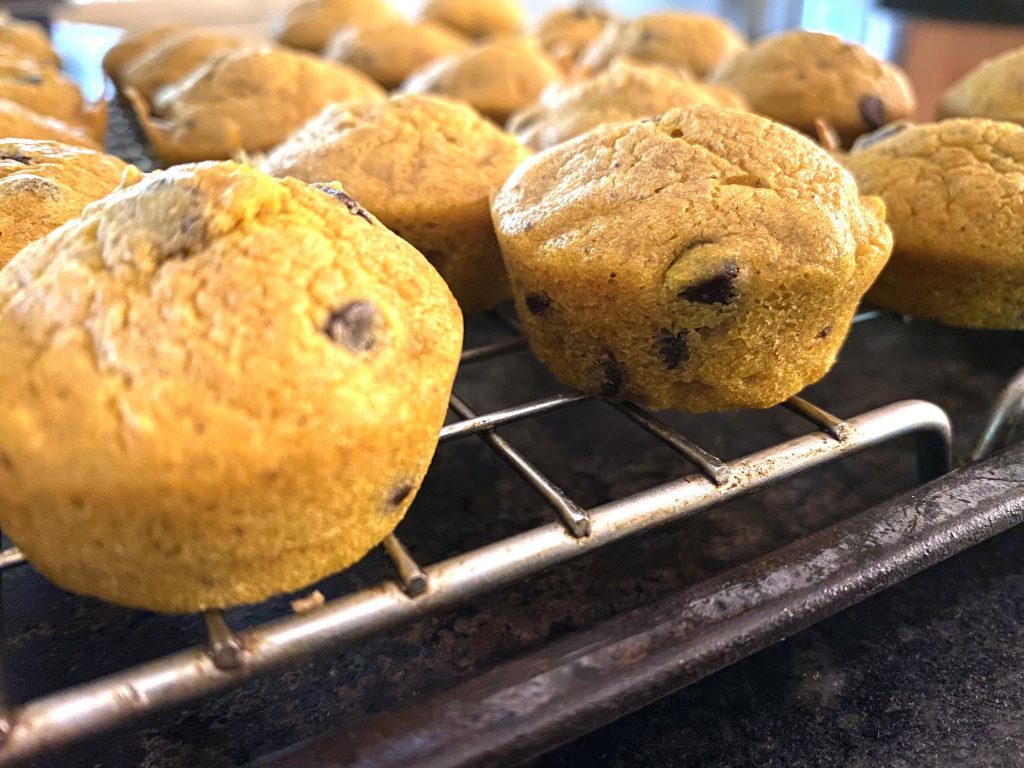 I weighed a few of these on my food scale to see how many carbs each would have, based on the recipe and the weight of each muffin.

I realize I am well on my way to an eating disorder by doing stuff like weighing mini muffins. But I wanted to see how many I could eat at a time and still remain within the 40g of net carbs allowed within my eating plan.

Turns out, each mini muffin had anywhere from 7 to 12 grams of net carbs, depending on the size. That’s still kind of high when you only get to eat 40g of net carbs per day. Sigh. I was hoping it would be more like 2 or 3 grams per bite. But no.

So I went back to searching for a recipe that would produce low-carb muffins without using almond flour.

I found one that looked promising on a website called The Big Man’s World. He has lots of low-carb recipes on his site and this one used peanut butter, pumpkin puree, eggs, keto chocolate chips, baking soda, pumpkin pie spice, and keto maple syrup. No flour of any kind.

And only 3g of net carbs per muffin!

So I whipped up a batch of these one night last week. They looked like real muffins! 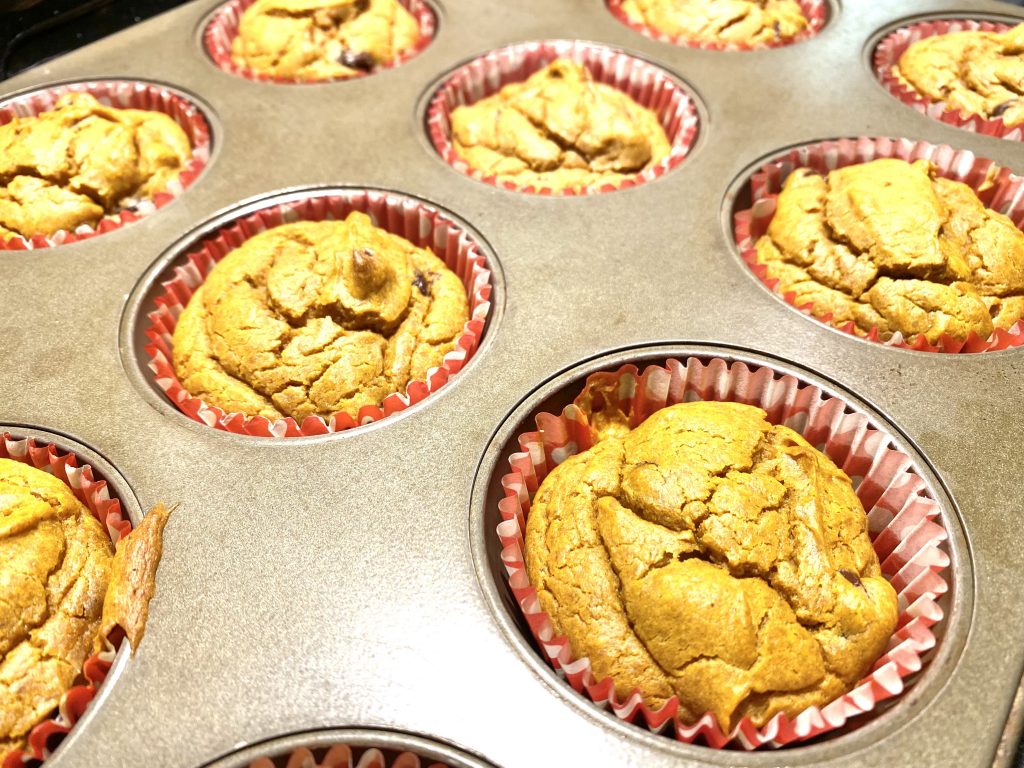 These are BY FAR the best low-carb baked goods I have made as far as texture and taste. They were moist and hefty and not sandy in texture. I may want to adjust the flavors a bit because they tasted very strongly of the maple syrup.

My daughter said she could taste a lot of the peanut butter, which she didn’t prefer.

So the point is that these didn’t taste exactly like the pumpkin spice I was hoping for, but this was a definite win in the texture department. Flavors can be tweaked. Almond flour texture cannot. 🙂

Since this was a successful recipe as far as what I’m looking for with no almond flour, I am going to explore more recipes from this website and play with this pumpkin spice muffin recipe a bit to adjust the flavors to my preferences.

Low-carb eating is not easy. Don’t let anyone tell you it is. And the substitutions made with alternative flours and sweeteners are not always a successful translation.

If you don’t crave sweet treats this will not be a problem for you. But if you love to bake cookies and cakes and muffins like I do, especially at this time of year, it can be a real challenge.

But limiting carb intake is really working for us. I have now lost 16 pounds. I would never have thought that possible at my age. 🙂

If you are following a low-carb eating plan and looking for a seasonal pumpkin spice flavored treat, give these two recipes a try.

The first recipe is not low-carb but I made it in the mini muffin pan, which limits the number of carbs per muffin due to the small size.

The second recipe is a low-carb muffin, with only 3g of net carbs per full-size muffin.

My quest to eat tasty and satisfying food while controlling the number of carbs I eat remains a challenge. I am going to keep trying and will share any successes I have!

If you have any recipes for low-carb baked goods, please share! My baking pans are at the ready! 🙂 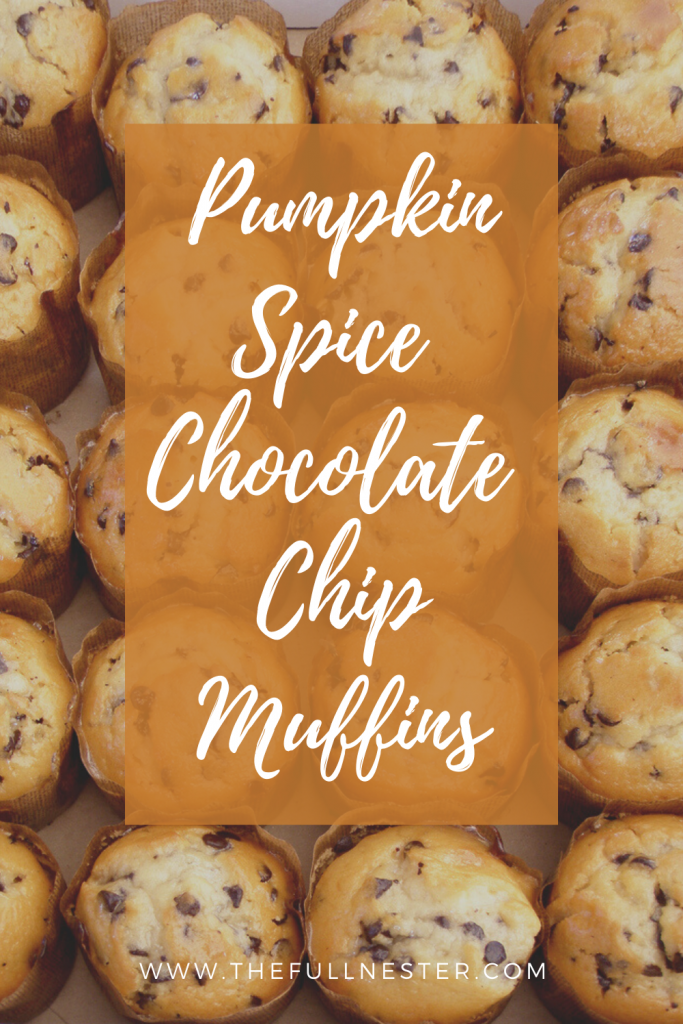