My Quest to Bake a Babka 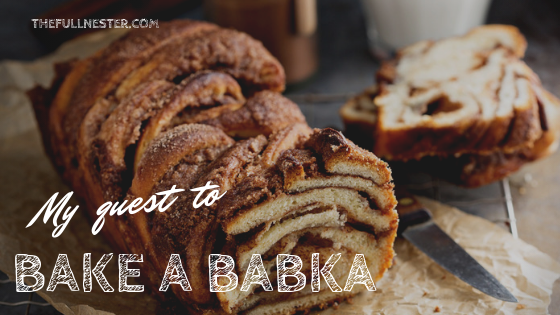 Much to my frustration, yeast baking eludes me. I have absolutely no issues baking cookies, cakes, brownies, quick breads and those kinds of desserts. But you throw yeast into the picture and I start having problems.

I don’t know if it is the humid climate where I live, me not doing something right, or some yeast gremlin that just doesn’t want to see me succeed. 🙂 I battled the gremlins last week when I had the ambitious idea to try to bake a babka. 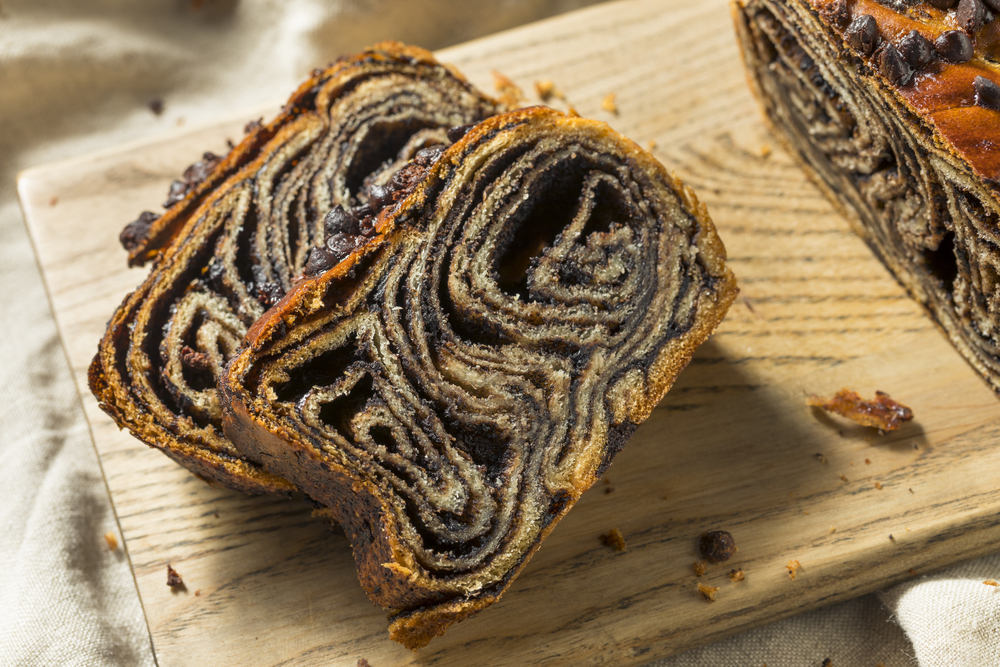 What is a babka? A delicious, layered, swirled, yeast bread that is usually made with chocolate or cinnamon, with roots in Eastern Europe. I had never heard of a babka until that famous Seinfeld Dinner Party episode. The gang is invited to a party and Elaine states that they must take cake and wine to the hostess. George thinks Ring-Dings and Pepsi would suffice. 🙂

George and Kramer go to get wine, while Jerry and Elaine head to the bakery. Elaine wants to purchase a chocolate babka, but the last one is sold before their number is called. They end up having to settle for a cinnamon babka, which Elaine deems to be a “lesser babka.” Jerry disagrees, stating that “cinnamon takes a back seat to no babka!” 🙂 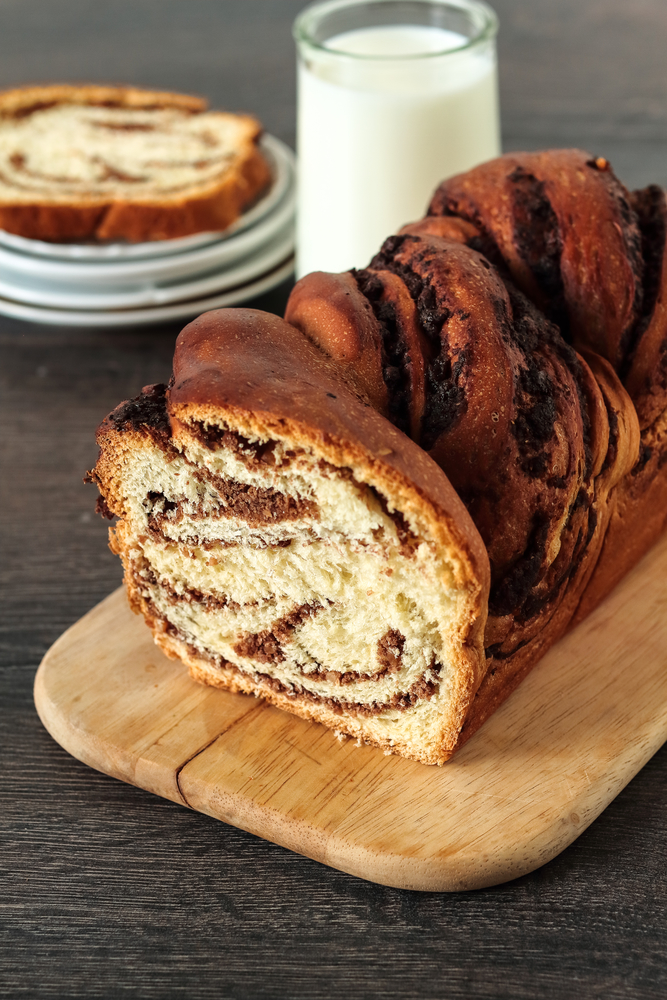 I first ate a babka when we lived in Virginia. There is a wonderful grocery store chain on the East Coast called Wegmans. If you have ever been to one of these stores, I don’t need to tell you about them. If you haven’t been to one, please try to go whenever you get a chance.

They consistently make the top of the list of favorite grocery stores. They are clean, have an amazing selection of food, and have a hot bar that serves food that rivals any restaurant. We often saw date nights going on there. It’s that good.

Where we lived in Virginia, the Wegmans made a Red White and Blue Bread in the summer that I can still taste. I have tried recipes that claim to replicate it, but no dice. It is a quick bread with cranberries, blueberries, and a coarse sugary topping. Wegmans, if you’re reading this, please send me the recipe or a loaf. I would be most grateful. 🙂

They also had an amazing babka. While I think that almost anything that contains cinnamon cannot be bad, I have to agree with Elaine that the chocolate babka is my favorite over the cinnamon. They sold the Green’s brand, which is also available online.

Since returning to Texas, we’ve found a decent babka at Whole Foods, but it’s not quite as good as the Green’s brand.

So I was fresh off a kitchen victory of making macarons by myself after taking cooking classes at Sur La Table a few weeks ago.

I used the little kit I talked about, and it worked PERFECTLY. I had been looking at pictures from Jenna Fischer’s Instagram, showing off her new found baking skills. She was singing the praises of Alchemy Bread, so I decided to check them out. I saw that the baker had a cookbook, which I promptly ordered.

I have baked bread before, so I’m not a complete beginner, but as I mentioned, yeast gives me problems. I first started baking my own bread when we lived in Virginia. I was getting pretty good at it by the time we had to move back to Texas.

I think it was a combination of the dry climate, an oven that could be heated above 500 degrees, and just a lot of practice. I had been using The Artisan Bread in Five Minutes a Day Cookbook

which I LOVE. If you are new to baking bread, this is a great book to start with.

Since it had been a while since I had baked bread, I decided to try again with the Alchemy Bread book. I probably should have started at the very beginning and worked on my compulsory skills, but instead I just jumped right in mid-book to the babka recipe. Like I said, I was feeling cocky after my macaron success last week. 🙂

The babka recipe is yeast based, and I tried to pick the driest day I could find in Texas this time of year to try to make this work. The one challenge for me with this book is that all of the ingredient measurements are given by weight.

Any serious baker will tell you that is the best way to do it, but it feels awkward to me. The chef at Sur La Table who taught us how to make the macarons insisted that measuring by weight was the only way to go, and I did use weight measurements to make my macarons at home. I just used a simple little food scale.

So I measured all the ingredients for the babka and this dough is a sticky mess.

I went through the kneading, rising and resting process several times. The recipe also included the chocolate filling. I made that as well. It is DELICIOUS. I don’t think I let it quite sit long enough because it was still very soft when I used it according to the recipe.

But the next day the leftover chocolate filling was fully solidified and spreadable. I think this state would have been too solid to spread onto the bread dough, but somewhere in between would have been ideal. I also don’t think my dough ever got “risen” enough to work just quite right with the filling.

I did the best I could with the twisting part, which is what gives the babka all those beautiful swirls. Here’s what it looked like after I twisted it all together with the filling before letting it rise yet again. 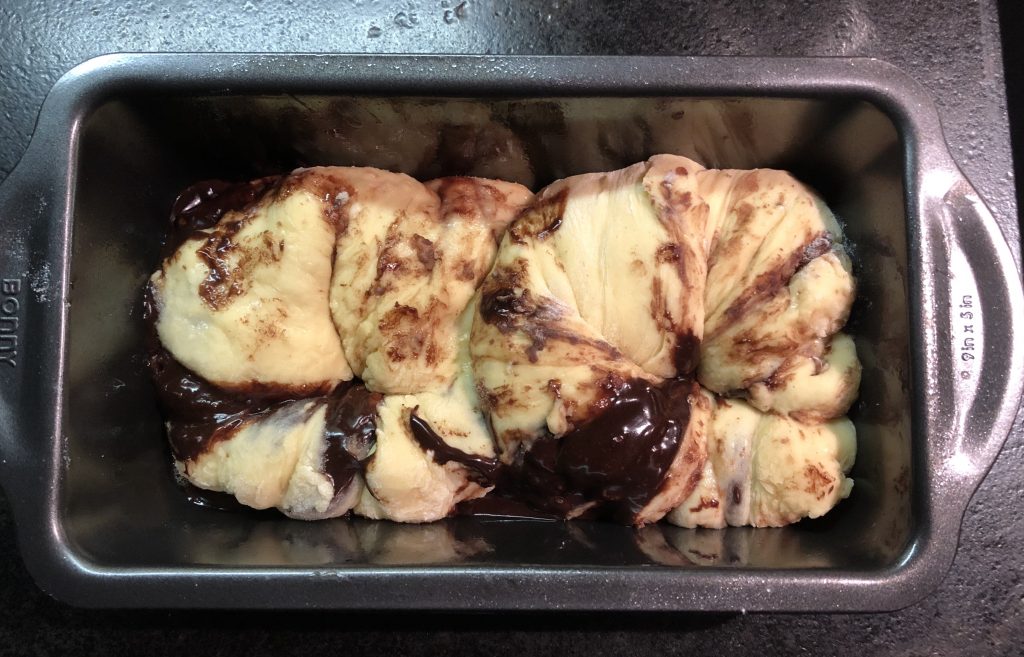 After it rose for the final time before baking, here’s what it looked like: 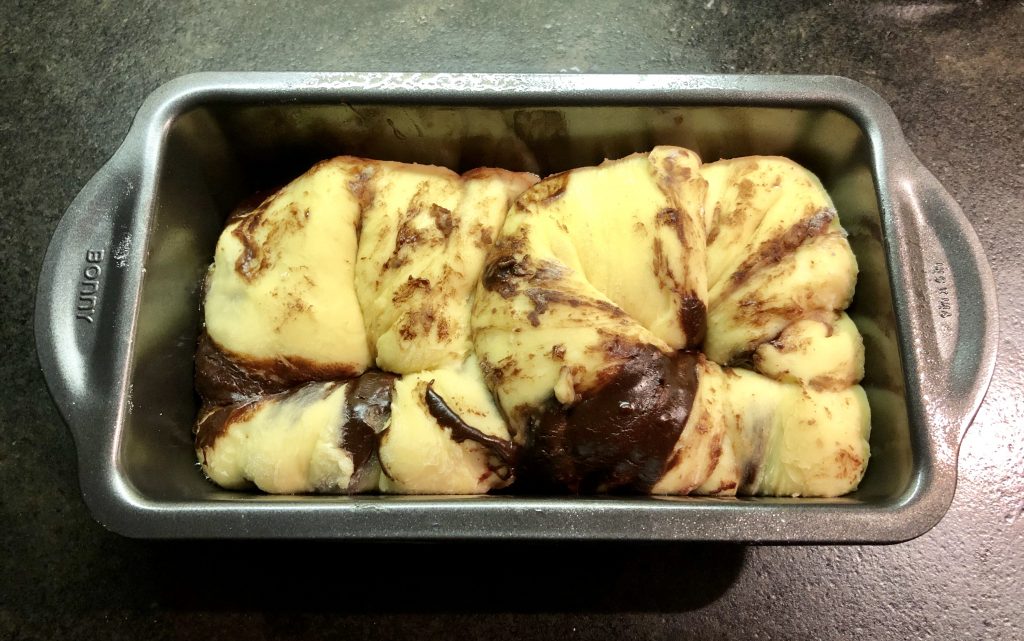 Into the oven. I apologize for these nighttime pictures but I was literally at this ALL. DAY.  I wasn’t able to bake it until late in the evening. My husband had gone to bed and said the smell of chocolate and bread started wafting in and woke him up. Chocolate and bread smells. Now THAT’S an alarm clock I could get behind. 🙂 Here’s my baked loaf: 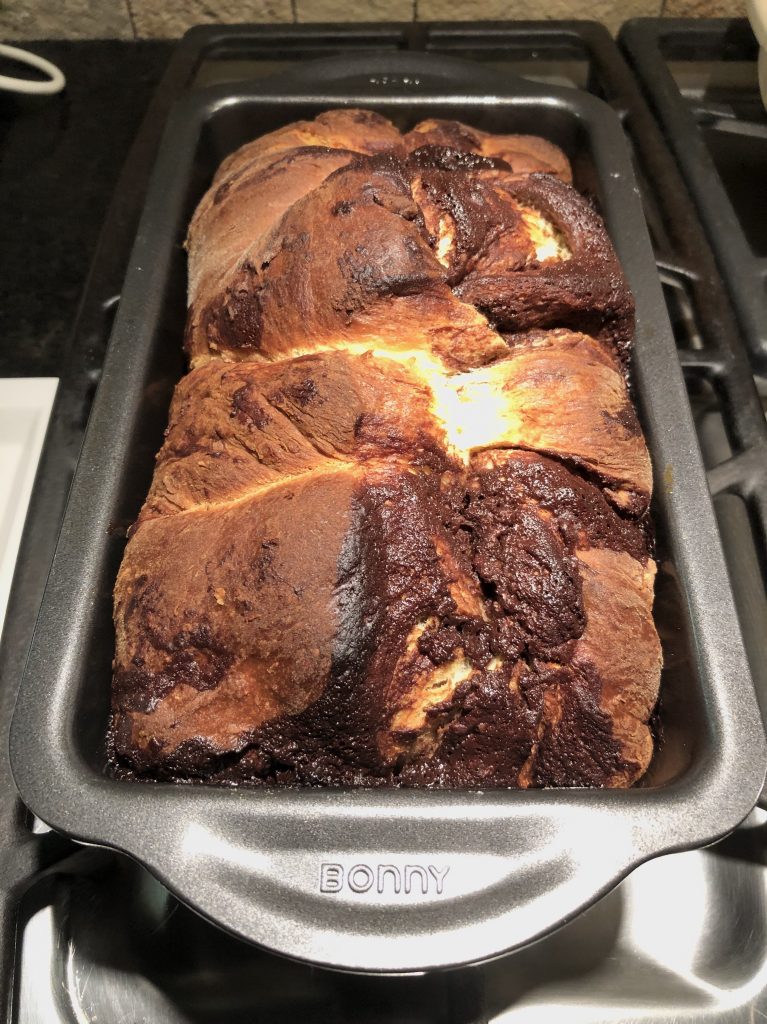 I was so anxious to cut into it to see what the inside looked like. The chocolate was incorporated into the loaf. 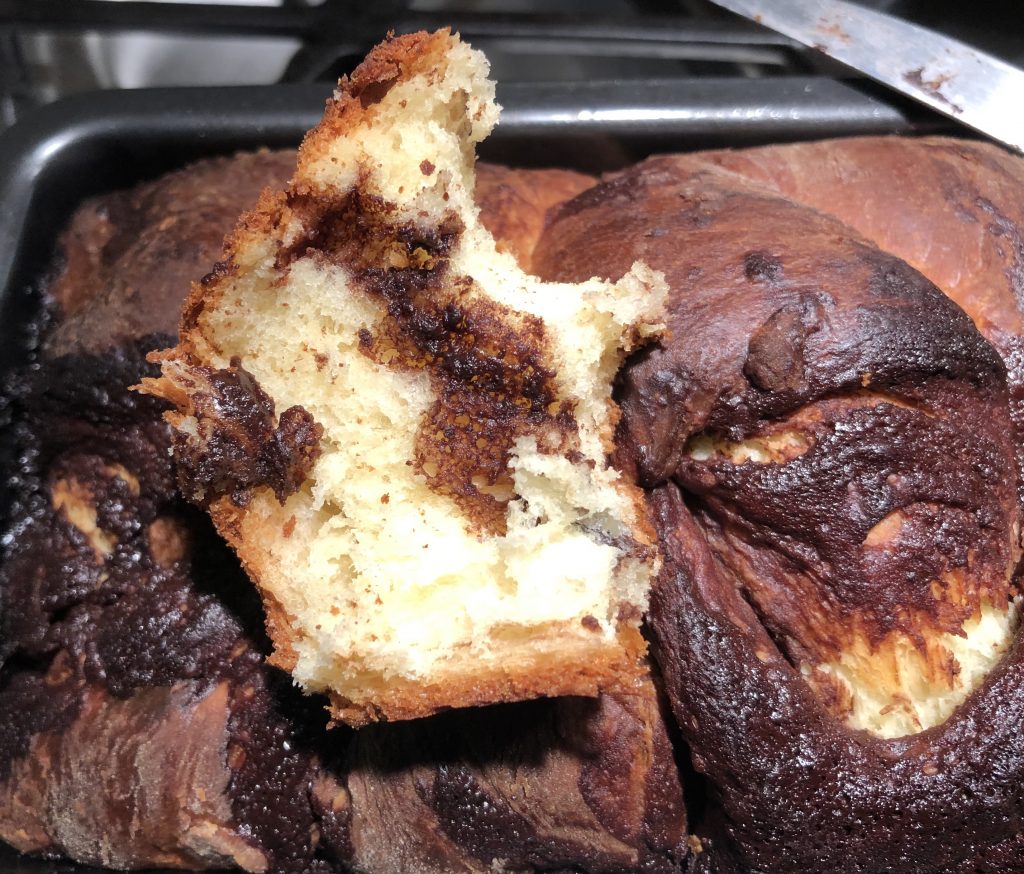 The store-bought versions and maybe really well made home baked babkas have really intense layered swirl patterns. Mine did not. 🙂 I think I didn’t twist the dough enough before letting it rise to bake. I think mine looked more like a marbled pound cake. 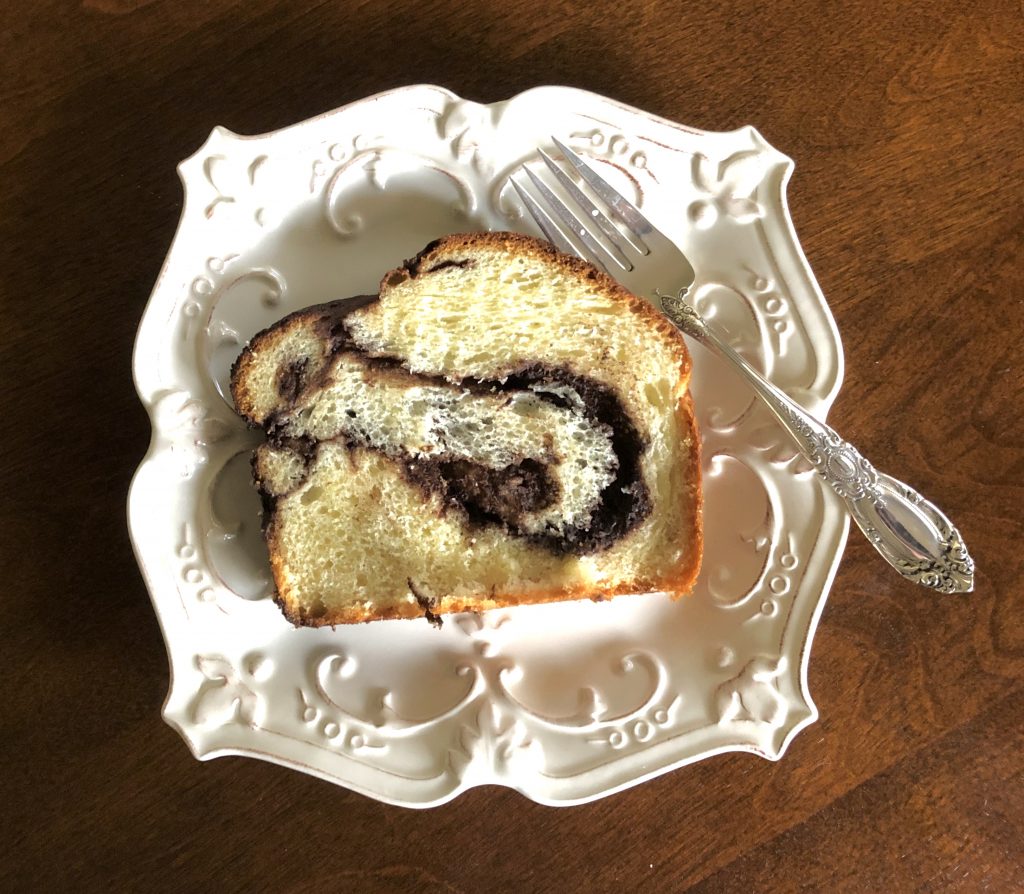 So it wouldn’t win Best in Show for looks, but it was SO delicious. It had a buttery flavor, it wasn’t overly sweet, and the moist texture of the chocolate spread with the drier texture of the bread was really a nice combo. It really had the flavor of the babka I had eaten before that I had loved.

If I were to try again, the improvements I would make would be:

So that’s my adventure with babka baking. Not a total success aesthetically, but by no means a fail. My babka tasted divine.  It was an ambitious project and I will try again to get better at it.

I probably need to back up a little and work on some simpler yeast baking until I finally conquer it once and for all. I highly recommend the two books I mentioned if you are interested in trying to up your baking game.

Are you a good baker? Let me know if you have any tips to help me get better at it. I’m all ears! 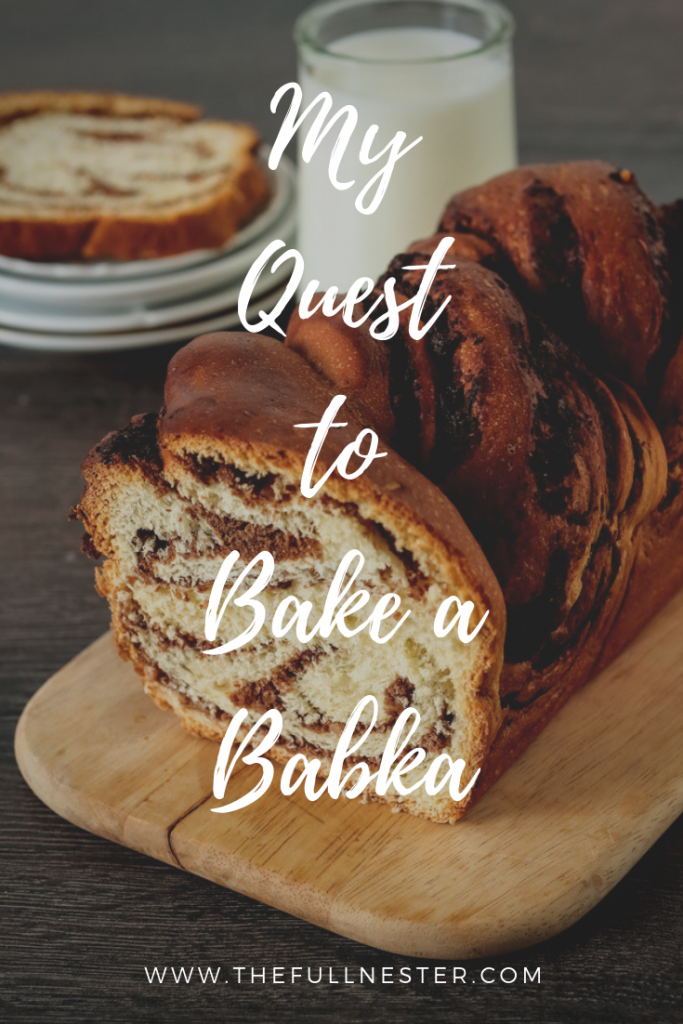