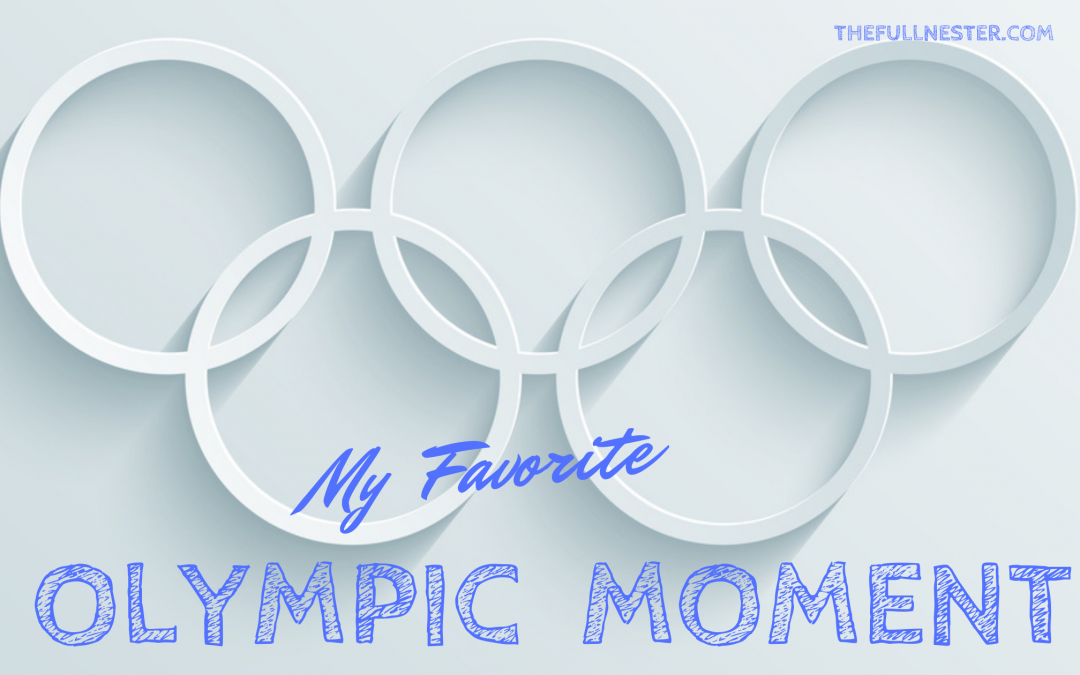 I LOVE the Olympics. I have watched them every time they occur since I was a child. 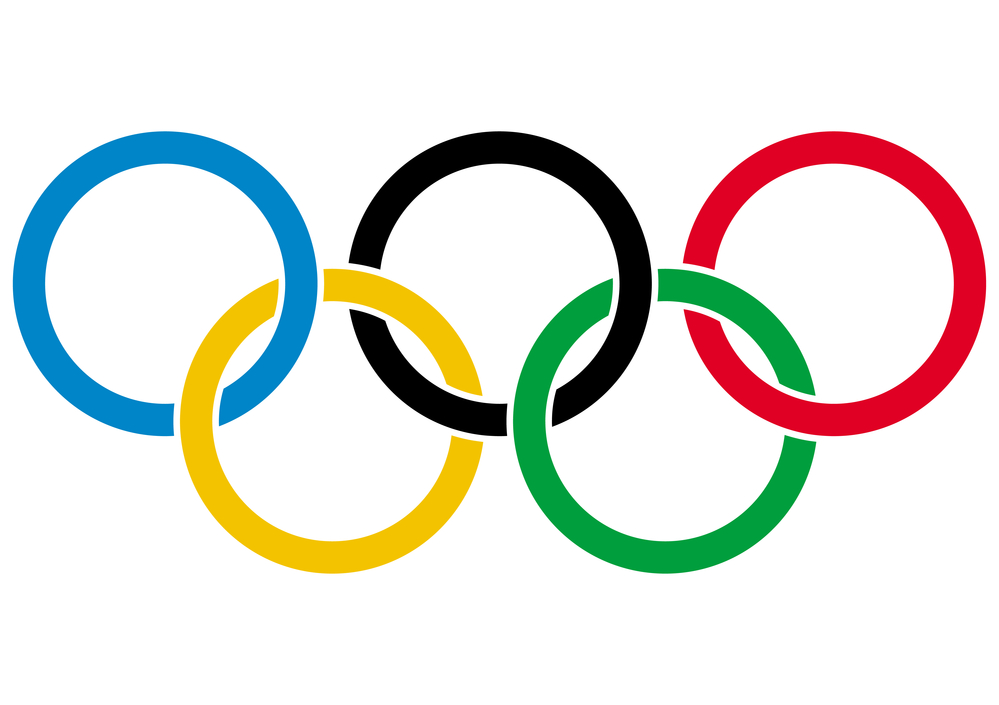 While the Olympics are definitely about athletic competition, they are about so much more. The SPIRIT of the Olympic Games is what matters to me.

Every time the Olympics are held, there is usually a “moment.”  Something that captures everything about the Olympics.

An act of courage. An act of kindness. An athlete pushing themselves to their full limit, then somehow finding just a liiiittttle bit more and pushing through.

Like when a runner falls, and a fellow competitor stops to help them up. Sacrificing their own chances of winning to help someone else. From another country.

Or, if you’ve never seen the runner named Derek Redmond in the 1992 Barcelona Games who fell, injured himself, yet gets up and tries to run and his DAD came out of the stands to help him finish, I’ll wait while you watch the video.

I love how his dad swats away others trying to help. 🙂

Like, “I got this. You can go.” I don’t know how anyone could watch that without getting emotional. The crowd screaming to cheer him on shows you how much we love this stuff.

This year’s Olympics got off to a bit of a shaky start. Athletes testing positive for the coronavirus. Athletes failing drug tests. An athlete quitting their team.

In spite of a repeat appearance from the oily Tongan during the Opening Ceremonies, I was getting a little worried that this year’s games might disappoint in many ways.

But then Sunday night happened. Were you watching? Something small, yet HUGE happened in the men’s high jump competition. And it immediately became my favorite Olympic moment.

An athlete from Qatar named Mutaz Essa Barshim was competing against an Italian athlete named Gianmarco Tamberi. They both continued to clear the same unbelievable heights in the high jump event. Both had cleared 2.37 meters (approximately 7 feet 9 ¼ inches) and would next need to clear 2.39 meters.

It was down to just the two of them. After three attempts, neither could clear the 2.39-meter height. An official called them over and informed them they would have to have a jump-off to determine the winner.

Instead, Barshim interrupted the official to ask, “Can we have two golds?”

The high jump and pole vaulting are the two events that allow for a tie in Olympic competition.

The official took a moment, then said, “It’s possible.” The moment he said that it’s as if the two athletes didn’t need to hear anything else. In a mere moment, the two decided to share the gold medal. They looked at each other, shook hands, and made the decision.

The Italian athlete became nearly inconsolable, celebrating and rolling around on the track. The Qatar athlete seemed less fazed. He seemed more amused than anything at the Italian’s antics.

I LOVED THIS. I loved that their decision to share the gold seemed almost instinctual. No thought required.

When asked about it later, Barshim said, “I look at him, he looks at me, and we know it. We just look at each other and we know, that is it, it is done. There is no need.”

Keep in mind that Qatar has only won two other Olympic gold medals EVER. Yet this guy decides to share his with a fellow competitor without a second thought.

So rather than continue to compete until one had defeated the other, they decided to win together by choosing not to fight. They shared their victory. 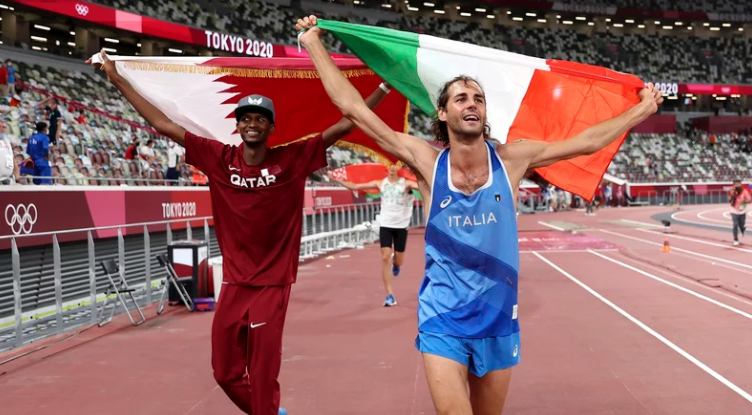 And then it got even better. They put their gold medals ON EACH OTHER. 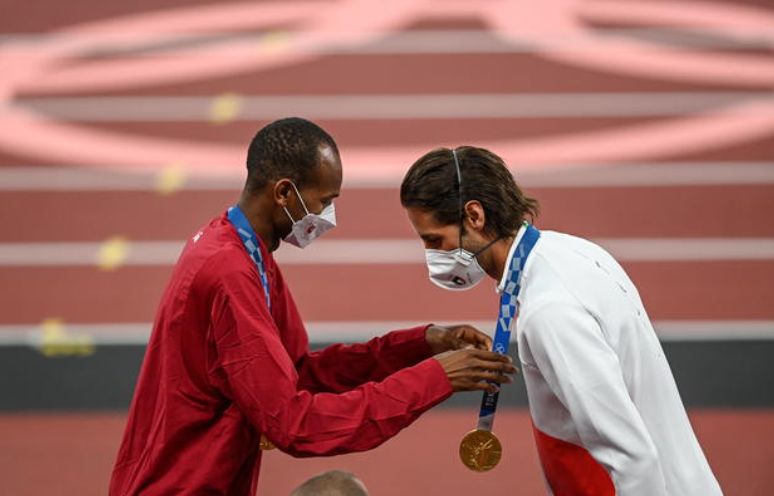 How can you not fall in love with these guys? 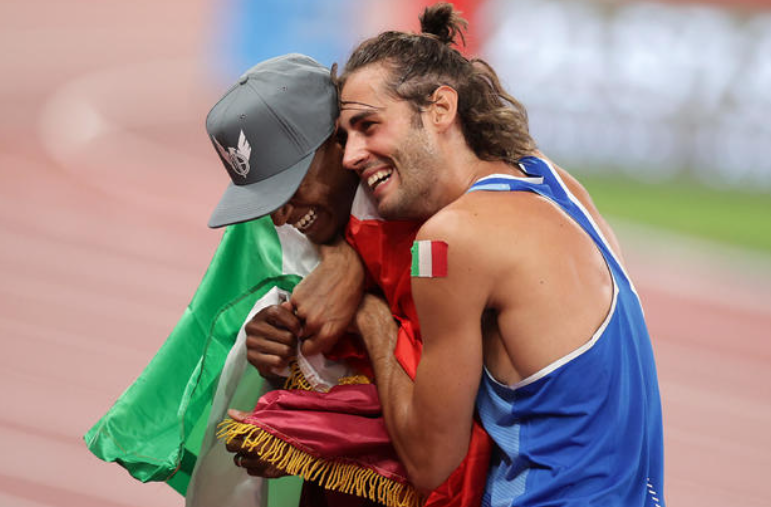 We later learned that these two athletes are best friends, which makes this even better.

The pair said they decided to share gold to prove winning isn’t always about mentally breaking down your competition.

“He is one of my best friends, not only on the track but outside the track. We work together,” Barshim said. “This is a dream come true. It is the true spirit, the sportsman spirit, and we are here delivering this message.”

These are unforgettable moments, to be sure.

But for me, it’s also these small acts of courage, kindness, and sportsmanship that personify the true spirit of the Olympic Games.

Here is the Olympic Creed:

In one small gesture of selflessness, Mutaz Essa Barshim of Qatar and Gianmarco Tamberi of Italy became my favorite Olympic moment of these games. I know we still have a week of competition to watch but these two will be hard to beat.

I really hope to see these two holding hands during the Closing Ceremonies. 🙂 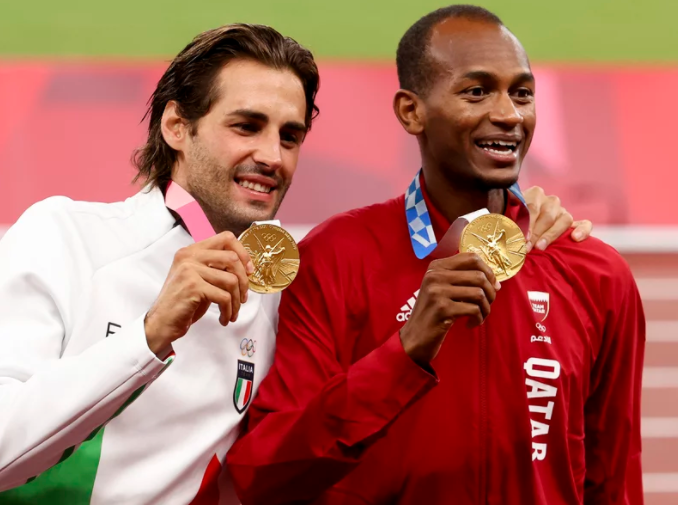 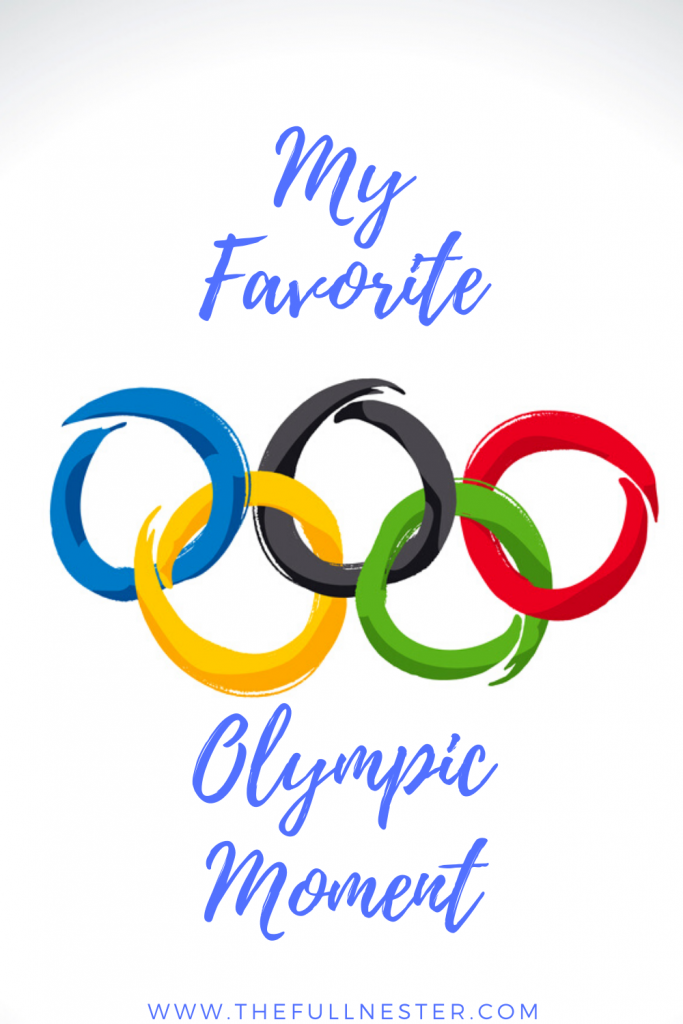