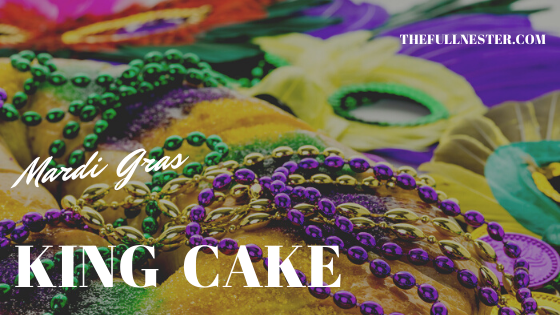 One of the best traditions associated with Mardi Gras is the King Cake. 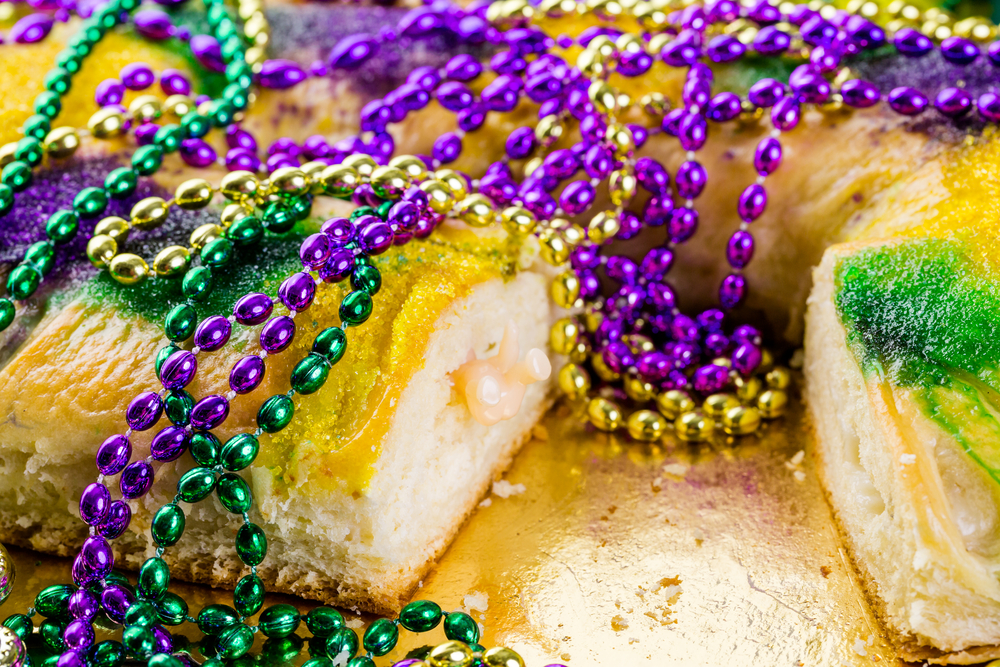 A King Cake is a circular pastry type “cake” that is covered in icing and a riot of color, in green, yellow and purple. I can best describe the texture as that similar to a Danish pastry, but with vanilla and cinnamon flavors. Oh! And there’s a baby inside the cake! (more on that in a minute)  🙂

I grew up in the Midwest so I didn’t really know much about Mardi Gras other than it happened in New Orleans, there was debauchery involved, and lots of beads, and it wasn’t an overly family friendly event. 🙂

But when I moved to Texas after college, I quickly realized that Mardi Gras celebrations happen all throughout the South, especially in those states nearest Louisiana. As Texas borders Louisiana, many of our traditions sneak across each other’s borders. We’re fluid that way. 🙂

Mardi Gras proper doesn’t happen until March but it kicks off this weekend in Galveston. And our party stores are full of Mardi Gras decorations. 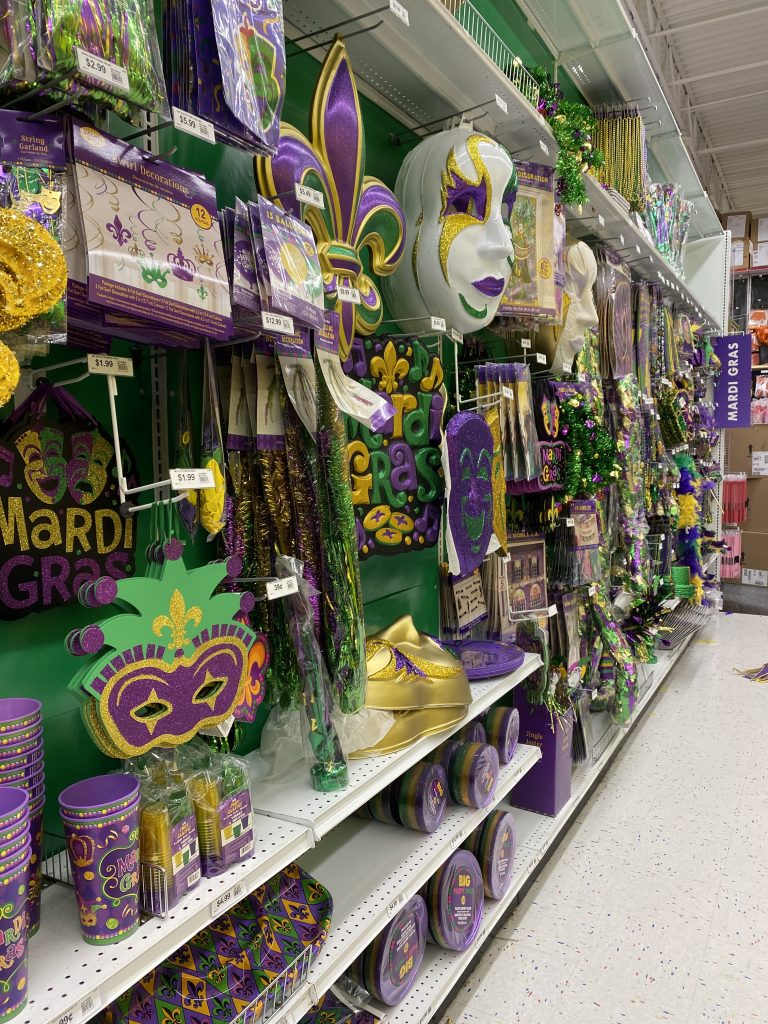 And since January, our grocery stores have been full of Mardi Gras displays and King Cake ICE CREAM! 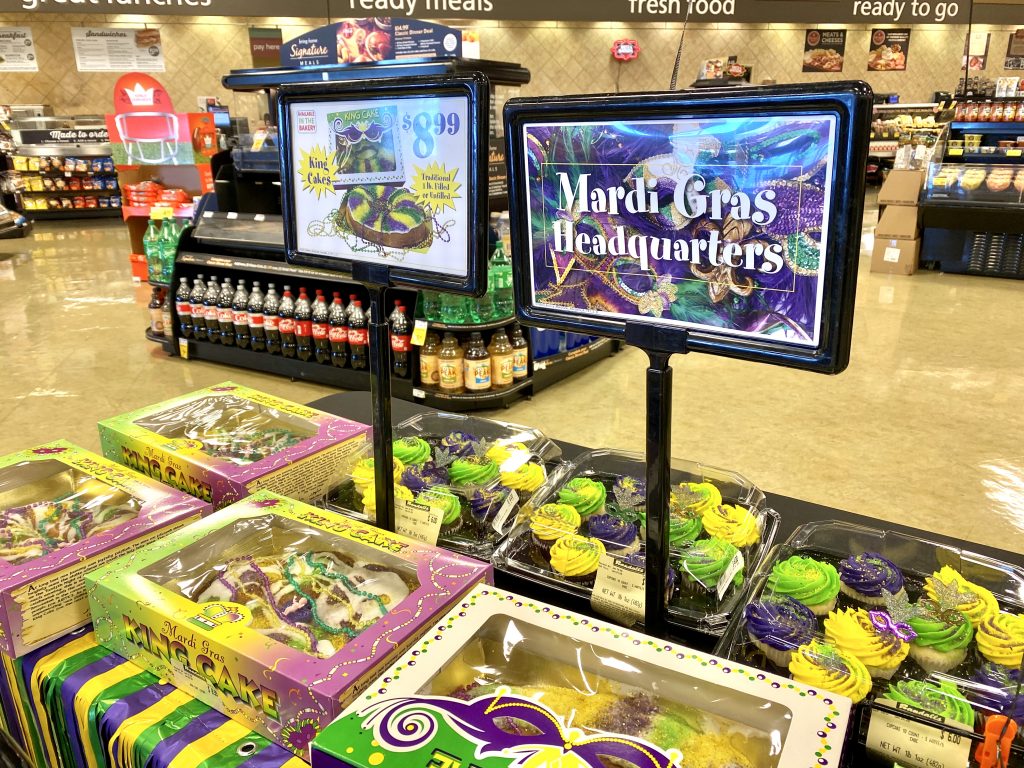 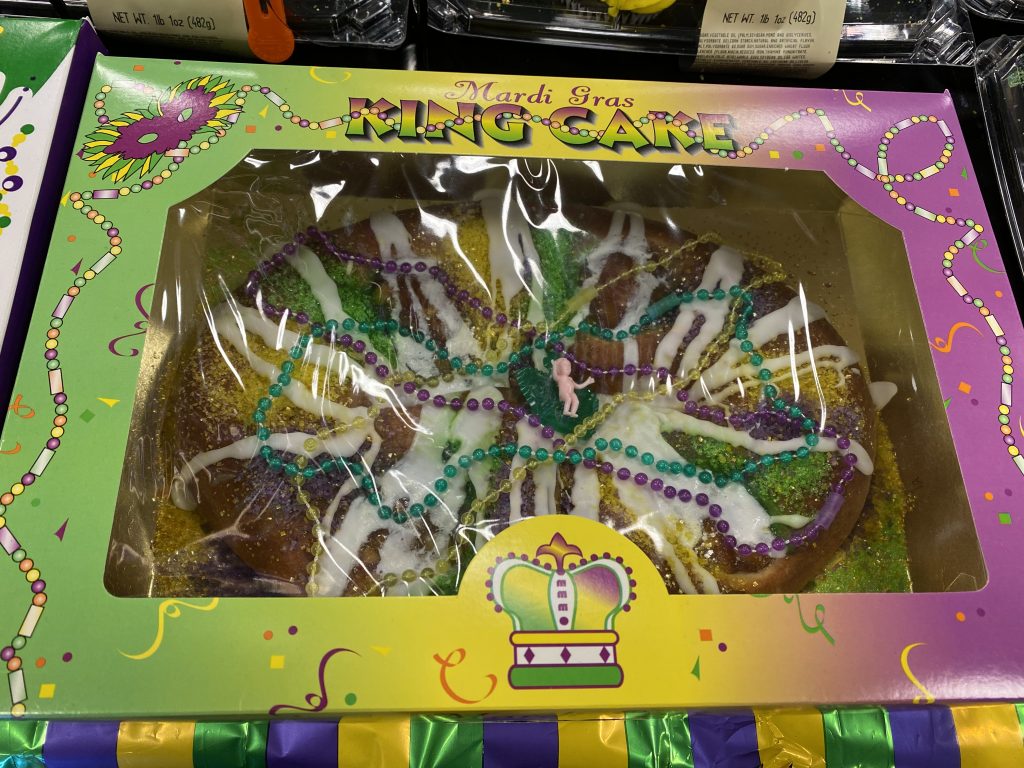 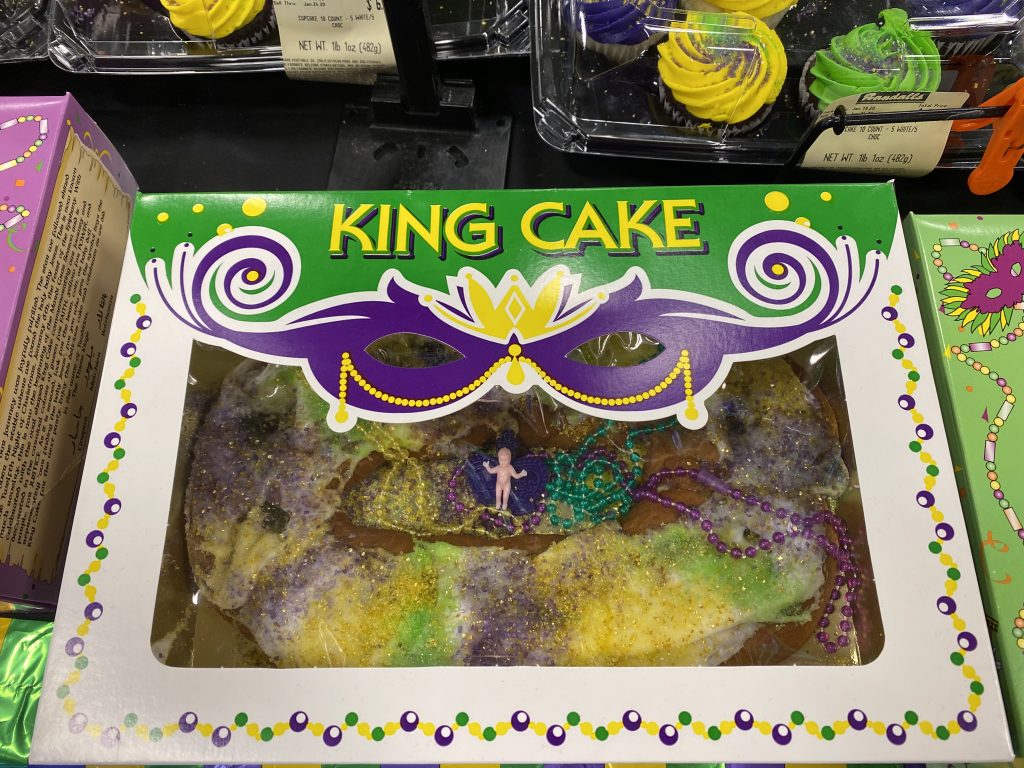 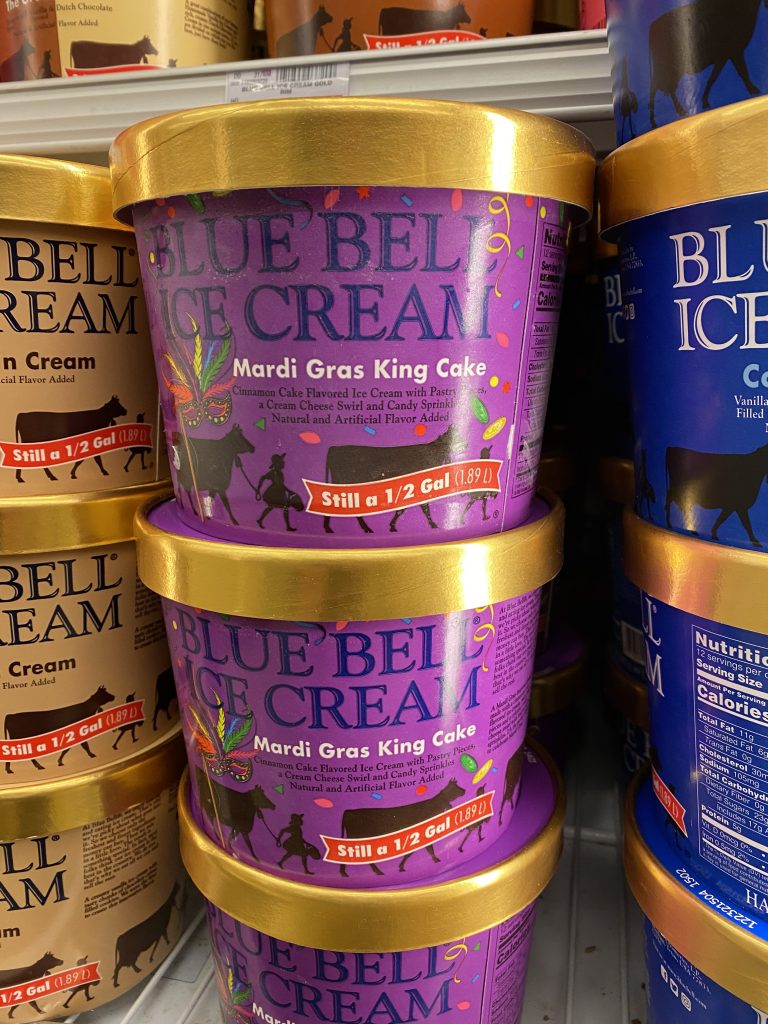 So back to that King Cake. King Cakes are round, with a cut out in the middle, like a crown. A crown made of cake is something I’d wear all day every day. 🙂

The purple, yellow, and green colors are symbolic. Purple represents power, yellow represents justice, and green symbolizes faith. King Cakes became popular in the Middle Ages in Europe, to celebrate the arrival of the Three Wise Men at Jesus’s birth.

The French brought the tradition with them to Louisiana and we are so glad they did. 🙂 The cakes start appearing everywhere in January, and you have to get your fill while you can because they disappear on Ash Wednesday, which is the start of Lent. That is March 2nd this year, so find one at a bakery near you or make one!

You can check out several great recipes here, and here.

King Cakes are no small baking feat, so you may also want to consider a baking mix kit that comes with everything you need.

This kit even comes with that baby I mentioned! The tradition with the King Cake and the little baby is that every cake has a little plastic baby hidden somewhere inside, and everyone wants to get the piece with the baby in it. So chew your cake carefully. 🙂

Some believe the tradition is that the baby represents the baby Jesus, others say that finding the baby ensures the finder will have good luck and prosperity in the coming year. Still others say that the person who finds the baby hosts next year’s party.

If you make your own King Cake from scratch, you can buy little babies online to add to your cake. Just don’t bake the baby into the cake. Add it after the cake has cooled. 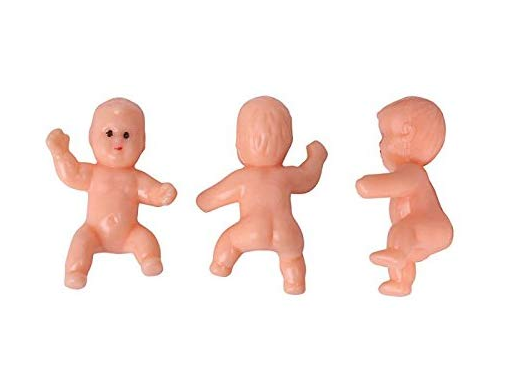 I’ve never seen these particular babies inside a King Cake, but if you like the purple, green and yellow color scheme, you can use a baby like these.

You can also decorate your cake with purple, green, and yellow beads. 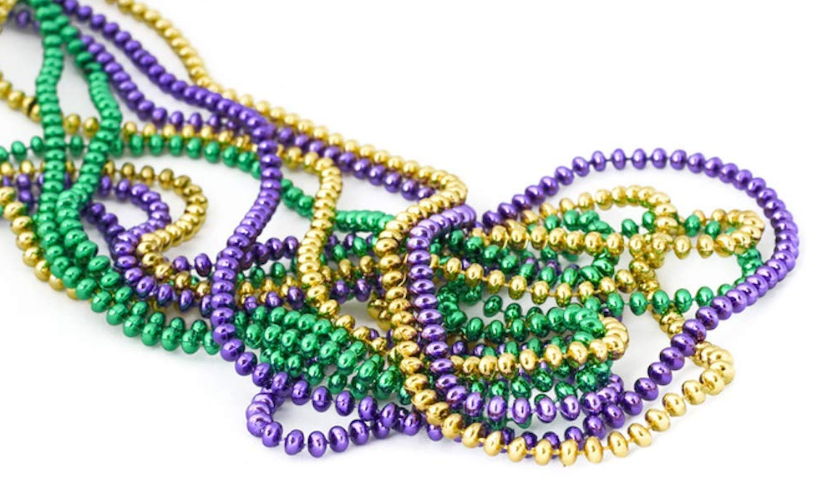 (By the way, I hear you don’t have to flash the parade floats to get some beads. You just have to yell, “Throw me something, mister!” and you’ll get your beads.) 🙂

You could also make King Cake cupcakes for a different twist. 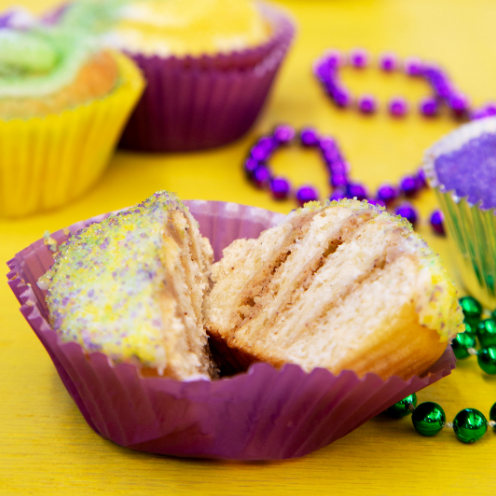 If you want a really quick way to make a King Cake, I found a fun recipe using

Pillsbury Cinnamon Rolls. This would be an especially easy way for kids to take part in the fun. All you need to add are the colored sugar sprinkles. 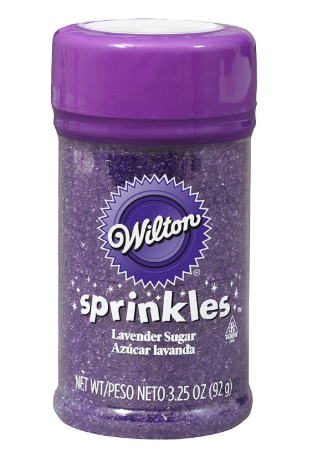 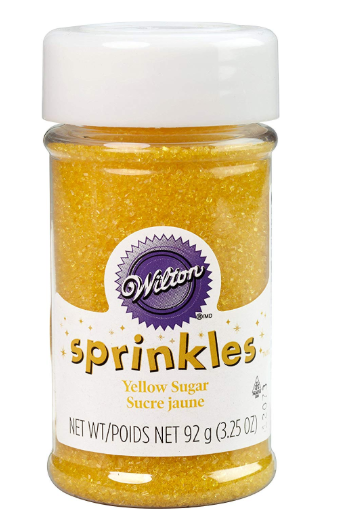 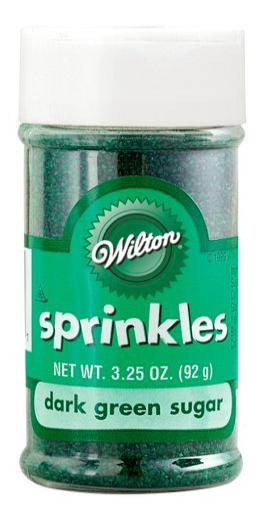 And finally, if you prefer your King Cake in liquid form, you can try a King Cake Milk Punch. To your personal taste, mix some cream or half and half, pineapple rum, orgeat (a flower liqueur), cinnamon, vanilla, and orange zest. Top your drink with the purple, green, and gold sugar. Laissez les bon temps rouler! 🙂 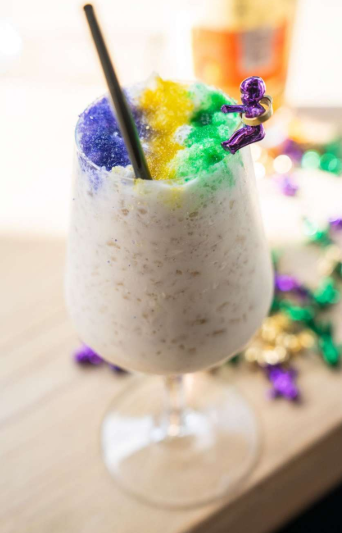 Hopefully, I’ve given you some ideas for experiencing the deliciousness that is the Mardi Gras King Cake. But hurry, because when they’re gone, you have to wait a whole year for them to come back around.

I’d love to hear if you’ve ever had a King Cake. Did you get the piece with the baby? 🙂 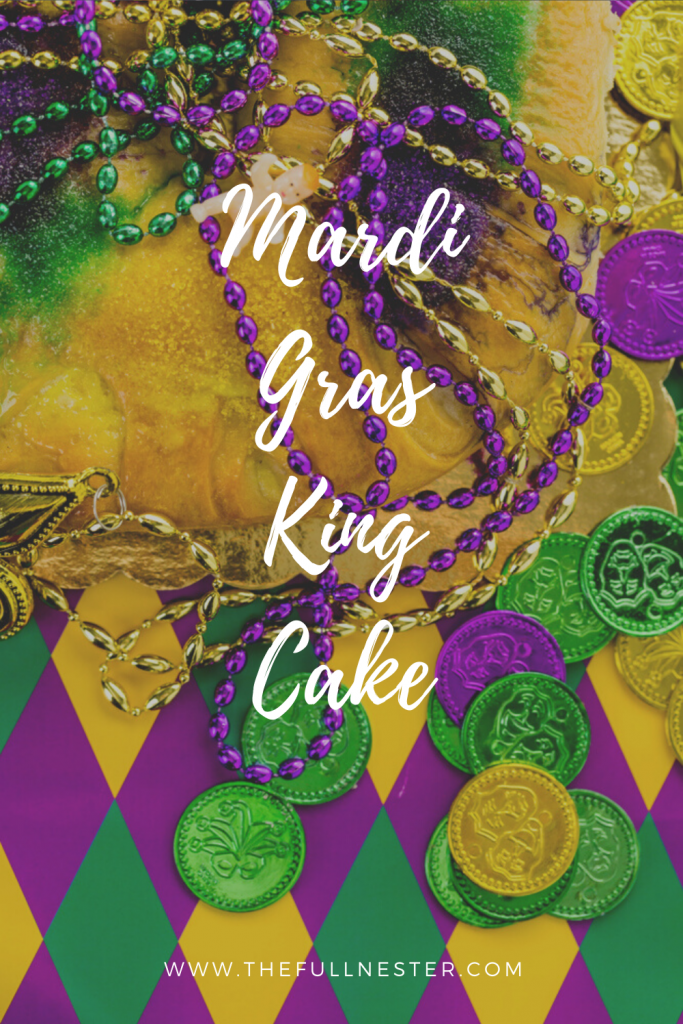