I Knew It! Heat Affects our Brains! 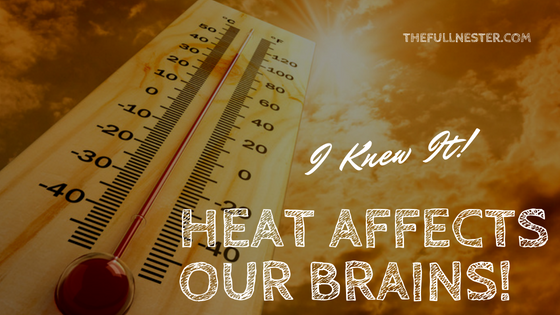 If you read my blog a few weeks ago, you know how much I do not like hot weather and how I’m using the Blu Breeze to keep cooler this summer.  Just this morning I was reading an article on NPR’s website that referenced case studies that indicated that heat affects our brains. Too bad they didn’t contact me for a testimonial because last week a catastrophe happened. Our air conditioner went out. In July. In Texas. So before I get to the study results, let me tell you what happened. 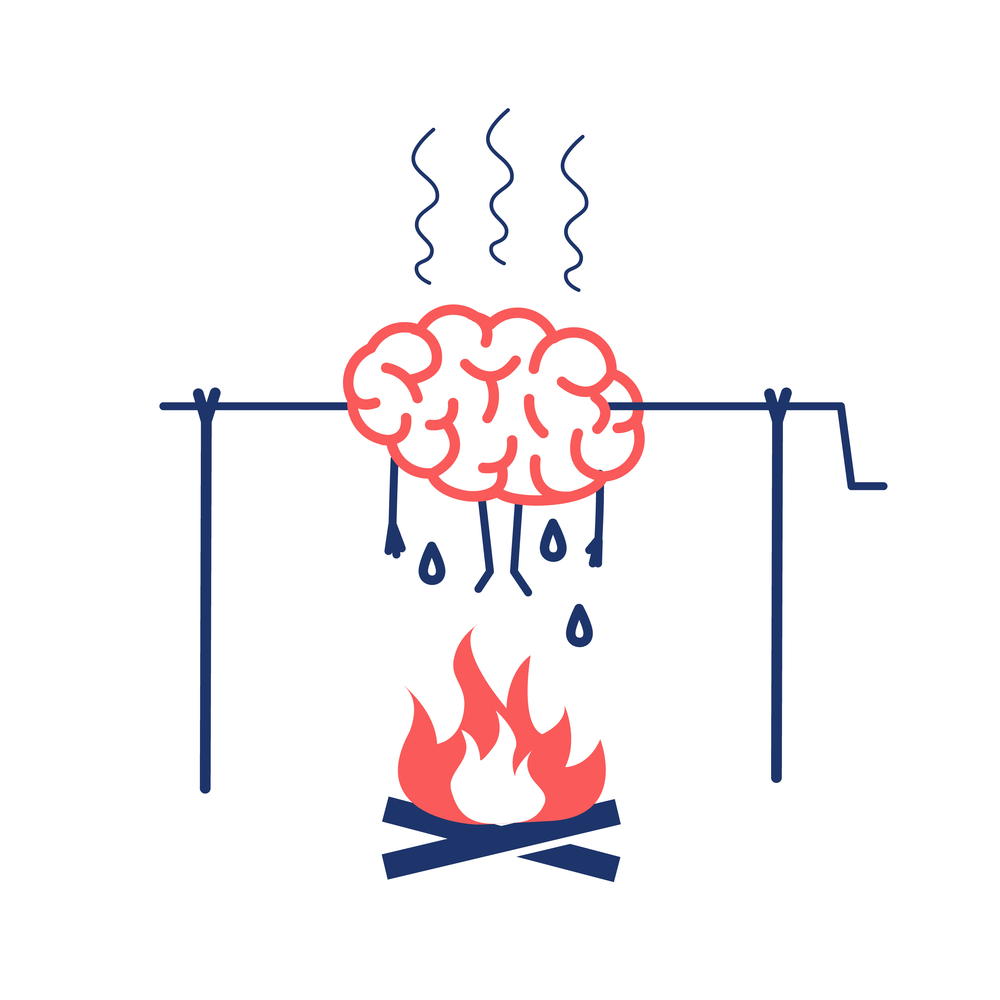 We have two air condition units, one of them significantly older than the other. The older one has required a repair every summer that we have lived in this house. I had just been thinking that we had made it to mid-July without a repair this year. Psych! Down it went. Last Thursday morning I noticed that half of the house was substantially warmer than the other so I paid a visit to the thermostat. It was still set on 72 degrees, where we keep it overnight. The screen read 78 degrees. Oh no.

I immediately began frantically hunting for the phone number to schedule a service call. Here’s how that call went with the gal at the A/C company:

Her: “We can get someone out tomorrow.”

Me: “Tomorrow? It’s getting hot in here. Is there anything available today?”

Her: (Laughing) “Honey, it’s July. Tomorrow is the earliest we can get there.”

Me: (Sad) “Okay. Well, I had to try. But if they get here and find me huddled in a heap from heat exhaustion, that’s on you.” 🙂

Her: “Try to hang on. I’ve got you first on the list for tomorrow.”

So I resigned myself to a hot rest of the day and night. Then about an hour later she called me back and told me there had been a cancellation. Would I be around if someone came out this afternoon? WOULD I? Absolutely. I thanked her profusely and told her I would like to include her in my will. 🙂

The repair guy arrived and did a few diagnostics outside and in the attic. Then he gave me the bad news. Our A/C had surrendered to the Texas heat. There was no saving her. We would need a whole new unit and duct work. I suddenly realized I would be several thousands of dollars lighter by the end of this day. He told me he would have to place an order for the unit and it would be installed the next day. So my hopes of not spending a night in a hot house were quickly dashed. While he was there I had him take a look at the other unit that had been dripping condensation and he said he could come back the next morning and fix that.

So I turned the other thermostat down to cooler than we usually keep it in an effort to try to cool the sauna half of our house down a little. It didn’t really work. My husband was out of town and my daughter and I both spent the night in the cooler half of the house.

The next day, my daughter hopped off to the beach to celebrate a friend’s birthday, and my husband was in Green Bay, Wisconsin, which I imagine might still have snow in July. 🙂 And here I was, under hot house arrest, waiting for repairmen. The guy from the previous day showed up about 10:30am to fix the working unit and told me the install guys would be here any minute. Any minute? Yay! Maybe my whole day wouldn’t be spent sweating.

I don’t know what “any minute” meant to him or if he was just trying to keep my hopes up, but by 1:00pm no one had shown up. I called the helpful gal who had scheduled the appointment and she said she would call the guys and text me once she found out where they were. She texted back that they had been delayed and it would probably be 5:00pm or 6:00pm before they would arrive. WHAT?! By then it was about 3:00pm. This was starting to feel like waiting for Comcast and their “We’ll be there between 8:00am and 6:00pm” thing. You wait all day then they show up at 6:05pm. Then she texted me back and said they would try to make it by 4:00pm. So I didn’t think I could leave the house if they were showing up within the hour.

Around 3:45pm I was out walking the dog and a big white truck pulled up to my house. Yay! They’re early! No. This was just the guy delivering the unit and parts FOR the installer guys. He left all the boxes and pulled away while I quietly sobbed on the inside.

4:00pm came and went. 5:00pm.  Still sweating. Finally at 6:00pm two very apologetic guys showed up and got to work. They were wonderful and very nice. I offered them cold drinks when they got here but they said they were fine. I said, “Well if you change your mind after five minutes up in that attic, let me know.” 🙂 They did quickly change their minds and asked me for water. Then they got comfortable and asked me if I had any sweet tea. Of course I do. No self respecting person in the South would answer “no” to that question. 🙂 So I just kept them topped off, with their little icy cups waiting in the hallway each time they came down from the attic or in from outside.

This is where my experience with how heat affects our brains comes in. While I was under house arrest all day, I had the brilliant idea to work on my quarterly sales tax returns for my Amazon business. It was 80 degrees in the house and I was just trying not to move too much, so I thought this would be a good use of my time. I was doing okay until I got to my California return.

If you have ever filed a sales tax return for California, you know I am not exaggerating when I say their website is RIDICULOUS. You have to enter your sales by county and city. Every sale you’ve made in every county and city in California for a given time period. Yeah. Seriously.

So if the California Department of Fee and Tax Administration is listening, you need to take a cue from oh, nearly ALL the other states in the Union who make this process WAY easier. Why would you purposely torture someone who is trying to GIVE you money?

I worked for several hours on this nightmare and my brain was just becoming gelatinous. I kept coming up $2 short from my individual entries to what the total should be. I finally decided to save my work and concentrate on refilling the drinks of my A/C men. They finished up several hours later as darkness was approaching, thanked me for my hospitality and headed off into the sunset. A few hours later the house had cooled down and order was restored. 🙂

Lest you doubt my tales of woe about Texas heat, here is the forecast for the upcoming week: 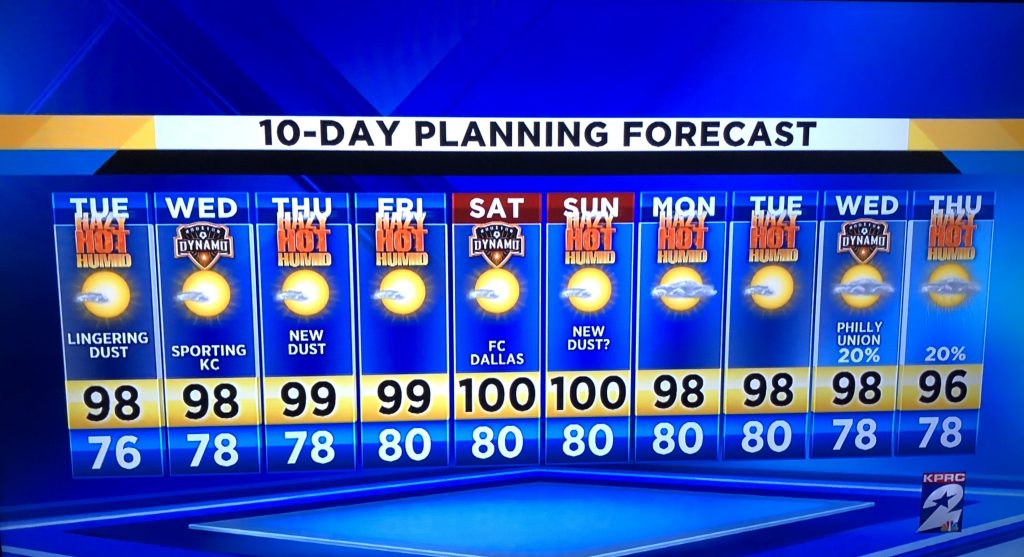 And let me tell you about the Saharan Dust we get nearly every summer. Yes, you read that right. Dust. From the Sahara. As in Africa. The same trade wins that blow hurricanes our way from the coast of Africa also blow dust from the Sahara into Texas. I can just hear those dust particles now. “Hey guys? What are you feeling this year? Houston again? Yeah, me too. It feels like home there. Okay. Houston it is. Wheels up at 0700.” 🙂

I took these pictures off our news showing what it looks like here today with the dust in full force: 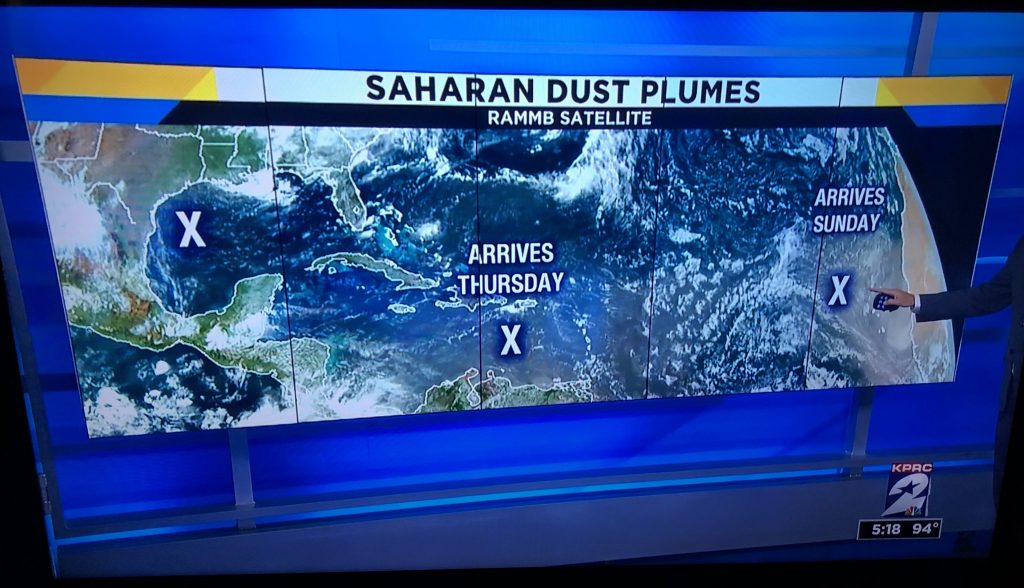 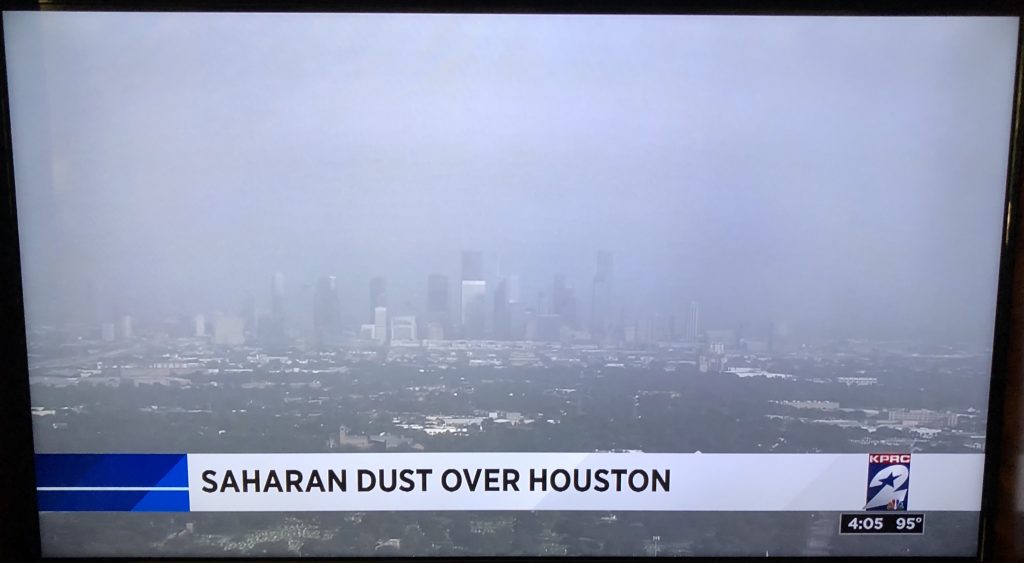 But it makes for some crazy awesome sunsets. I took these pictures last week: 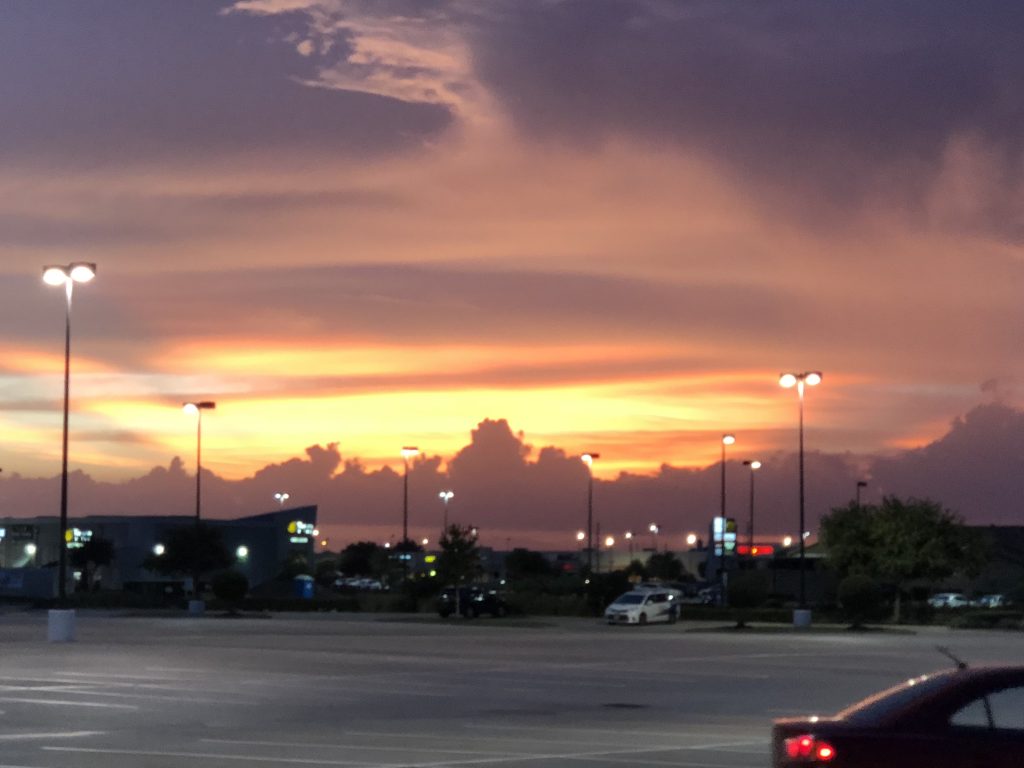 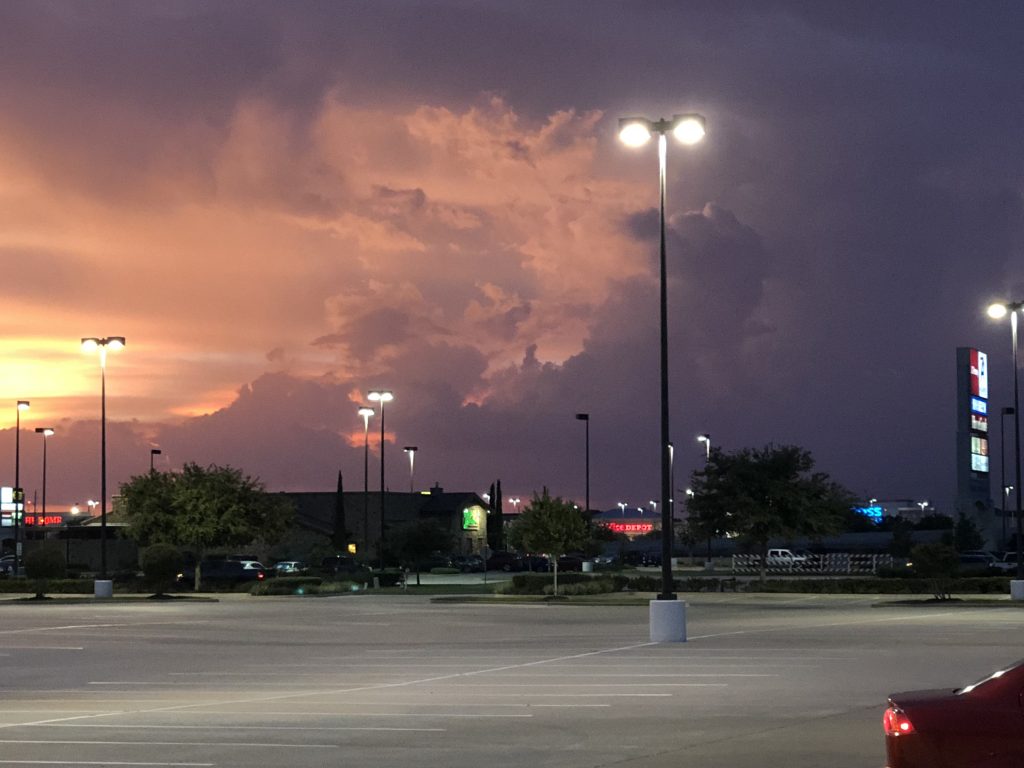 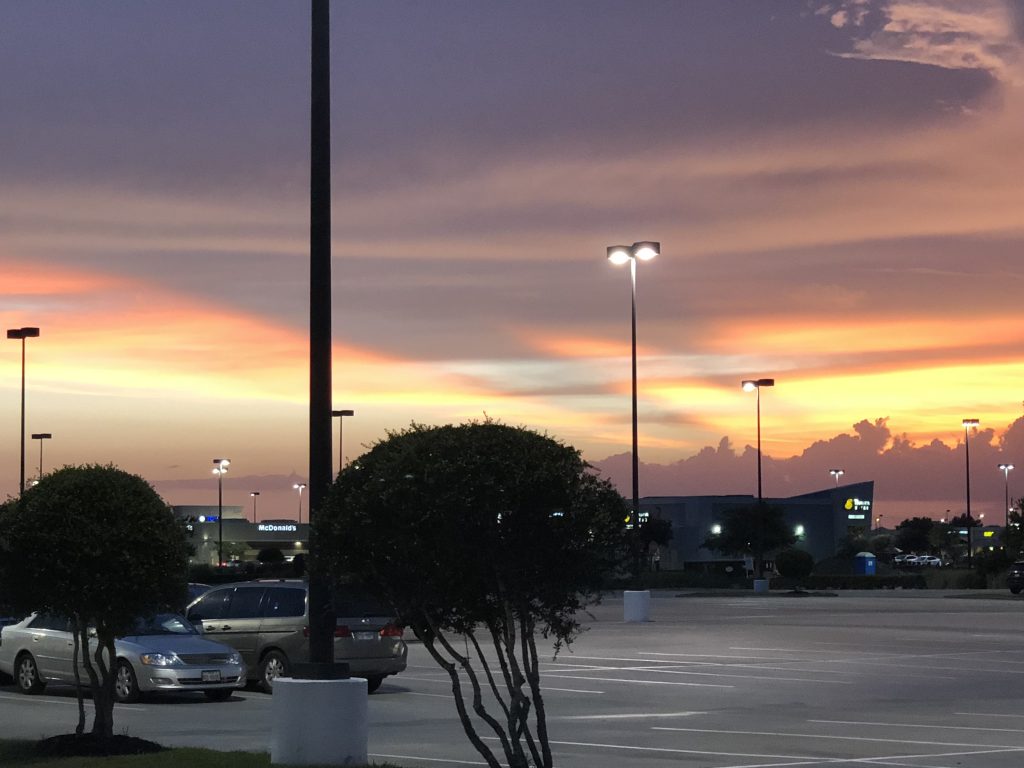 Back to the NPR article on heat affecting our brains. In a Harvard study, college students and their performance were studied under different temperature conditions. One group lived in an air-conditioned dorm where the temperature was 71 degrees. The other group lived in a dorm without air-conditioning, where the temperature averaged 80 degrees. They were given two tests per day for twelve consecutive days. One test used simple math problems to measure cognitive speed and memory. The other test measured attention and processing speed.

The students in the dorm without air conditioning consistently had 13% slower reaction times and a 10% reduction in correct answers on the test.

Could this also mean that if you believe in global warming, it could explain the increasingly rampant stupidity in the world today? Everyone’s brains are warming up! 🙂 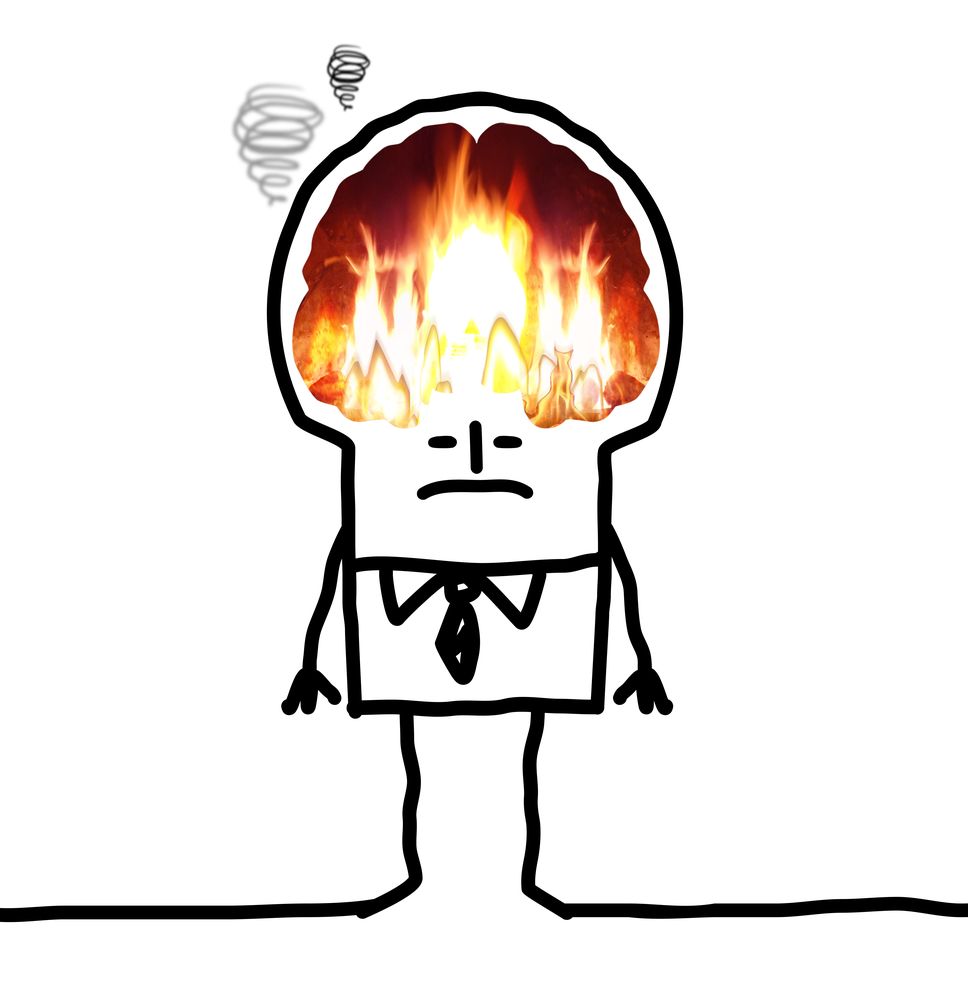 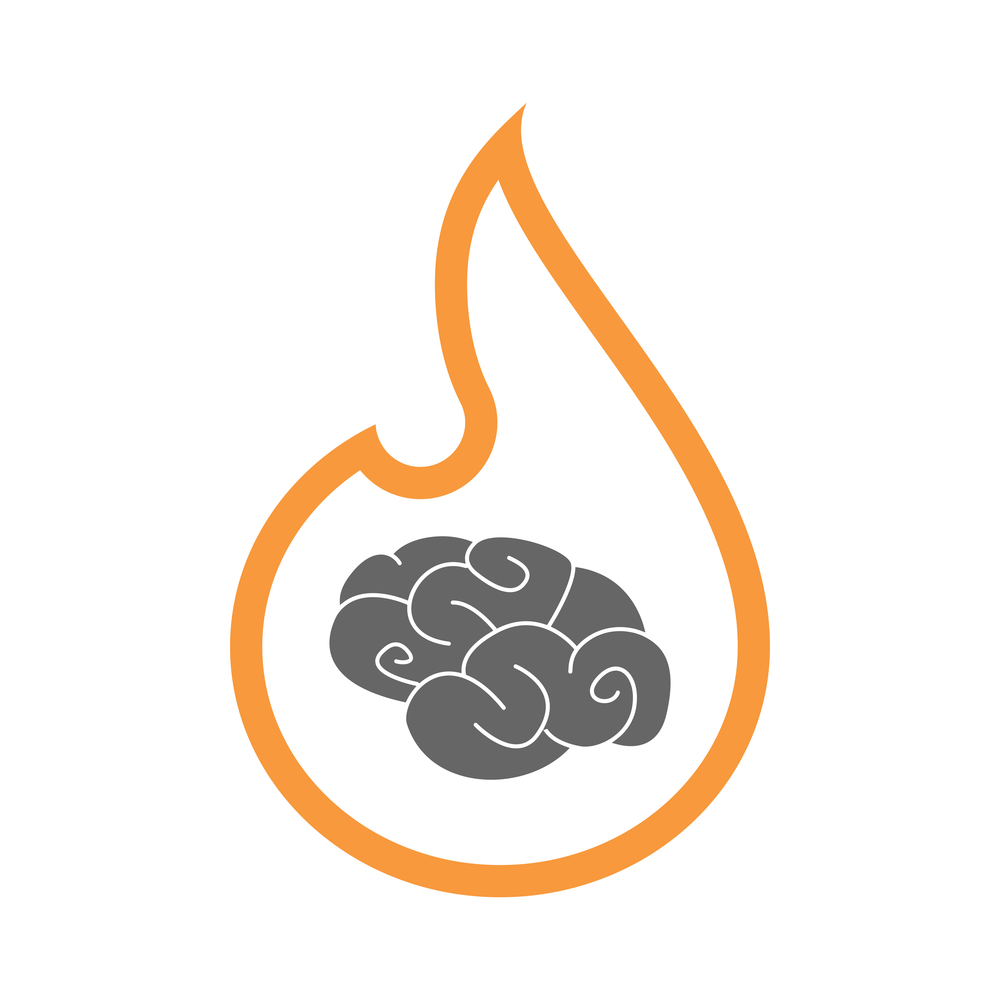 Another Harvard study conducted on New York City high school students showed that compared to performance on a 72 degree day, students taking a test on a 90 degree day led to a nearly 11% lower likelihood of passing the test, which can affect graduation rates. So all I hear is that being hot can keep you from graduating. Or properly filing your sales tax return for California. 🙂

What I also extrapolate from this, in my own highly unscientific way, is that all you ladies enduring menopause now have scientific evidence to back up your brain fogs. 🙂 You’re welcome. Also, you might want to invest in one of these little gizmos:

It’s a little fan that attaches to your phone! I have one and it works really well. They are available for both iPhone and Android.

So to everyone who gripes about how cold I like to keep my realm, I believe I now have science on my side, and you can’t argue with science. Just put on another sweater and be grateful that I’m helping make you smarter and more productive. 🙂 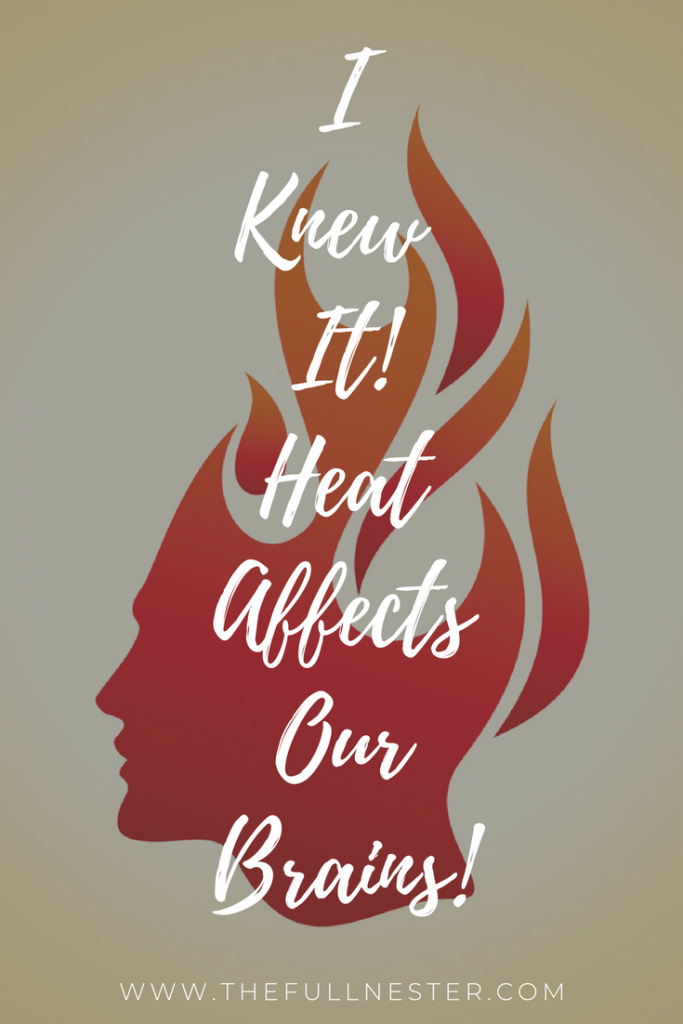