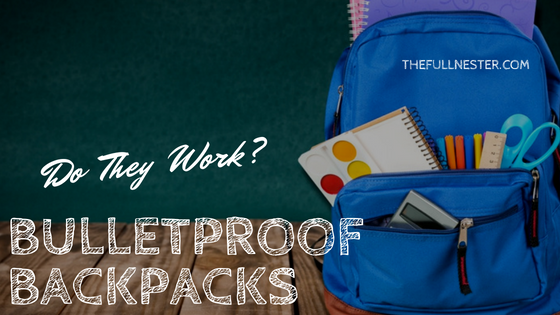 With a new school year starting it is something we have to be mindful of again. I first wrote about this topic last year when I saw a story on our local news that I think is a sad commentary on where we are as a society: bulletproof backpacks. 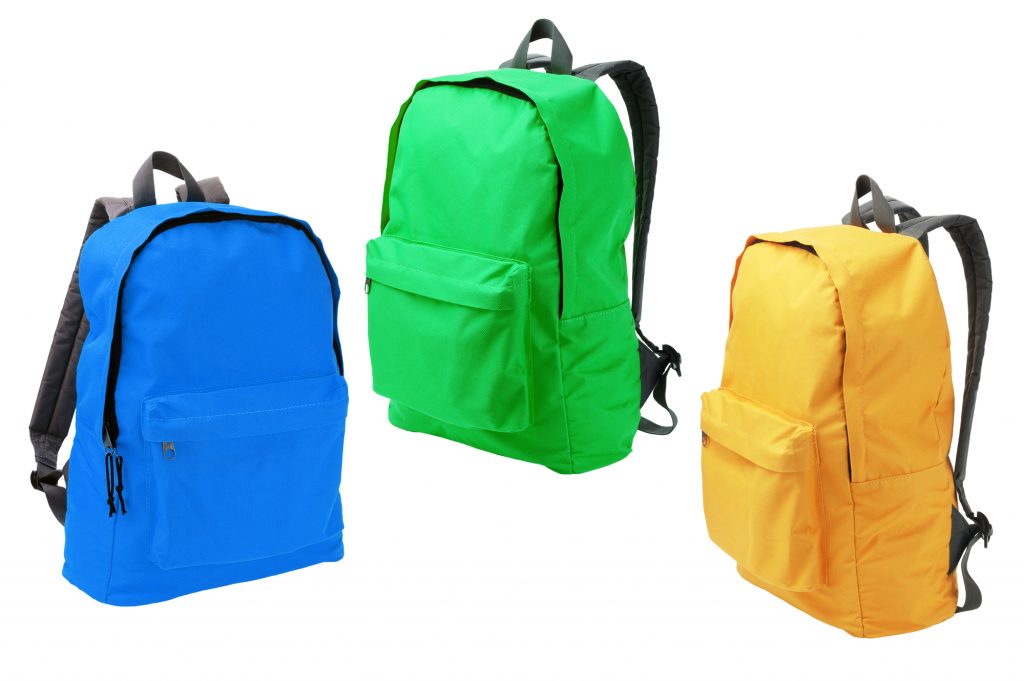 How did we get here?

When I was in high school I think the biggest things our parents had to worry about were keeping us away from the pot heads behind the bleachers after school and if those demons from KISS were coming to our hometown to play a concert. I know I’m dating myself. 🙂

KISS seems pretty tame now compared to what students and their parents have to consider. All they wanted to do was rock n’ roll all night and party ev-er-y day.

I remember being shocked as I watched the school shooting at Columbine unfold on TV in 1999. There were 15 deaths (including the shooters) and 24 injuries. I remember after it happened there was a lot of talk about stricter gun laws, bullying, cliques in schools, violent video games, and zero tolerance gun policies at schools.

Yet there have been a staggering number of school shootings since then. I was slightly encouraged after the shooting in Parkland, Florida when students seemed to rise up and demand change from the government.

Sadly, there were many more school shootings after Parkland, Florida, including one near where we live in Texas.

According to the Washington Post, all of this equates to more than 228,000 students who have experienced gun violence at school since Columbine. 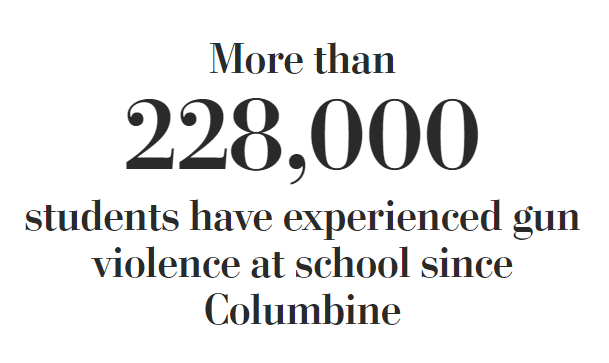 I find that statistic deeply troubling. It doesn’t seem to me that much has changed with regard to protecting students. The Parkland, Florida students have been very vocal, and I saw them all wearing a price tag that read $1.05 at a rally back in the spring.

I later learned it was to send a message to their senator, Marco Rubio, whose campaign had reportedly received $3.3 million in support from the National Rifle Association. Divide that figure by the 3.1 million public and private school students in Florida, and the students determined that worked out to be $1.05 per student. They wanted him to know they took offense that he valued their lives at $1.05 each. Pretty powerful stuff.

Yet what has changed?

Can the changes everyone talks about even help? I’m not sure. I don’t know if stricter gun laws are the answer, because criminals by definition are not people who follow rules or laws. I don’t know if these shooters become unhinged because of bullying in schools, or if they’ve played violent video games.

I heard an argument this weekend on one of the morning news programs saying that mental illness is rampant and that is the cause of the gun violence.

Another panelist noted that mental illness is present in other countries yet they do not have the gun violence that we have, implying that the comparatively easy access to guns are the problem.

I saw an interesting interactive graph showing the number of shootings and deaths in the U.S. since a gunman walked into Sandy Hook Elementary in 2013. It’s very sobering.

I don’t understand mass shootings and I don’t know that any shooters who did not kill themselves or were not killed by police have shed any light on the subject. I don’t get what is in it for the shooter to kill innocent people. I don’t understand how the parents of these shooters say they had no idea their child was amassing an arsenal in their garage. So much of it just escapes me.

What I do know is that many students and parents are not waiting around to find out the answers to any of the questions. They are taking matters into their own hands. Enter the bulletproof backpacks.

In the news piece I saw, the reporter focused on ballistic shields that fit into a backpack and are designed to protect students from shooters. Parents are purchasing these for their children and teaching them how to use them.

The reporter enlisted the help of two former Secret Service agents to test the products out to see if they actually could stop gunfire from penetrating a backpack.

The first product they tested was the Guard Dog Security Ballistic Shield. This is a backpack that already has the bulletproof shield sewn inside the backpack, and the price averages around $189.

It looks like any other backpack you would see a student carrying. One of the Secret Service agents fired shots with a .45 caliber pistol at a dummy wearing the backpack. Not one shot penetrated the shield.

The next product they tested was the Tuffy Packs Ballistic Shield. The shield fits into a child’s backpack and sells from between $159 and $179. Shots were fired with a both a .357 Magnum and a .44 Magnum handgun into the backpack containing the shield. Again, not one shot penetrated the shield. 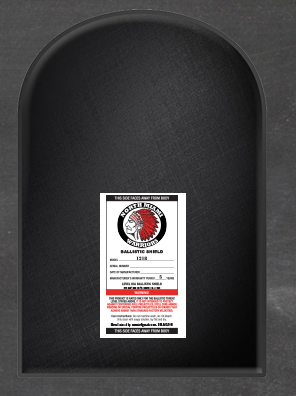 A slightly different product called the Veteran’s Hyperlight Ballistic Clipboard was tested next. This product looks like a clipboard and sells for $199. This could be a very viable alternative for students whose schools do not allow backpacks. They can carry this clipboard with them. Shots were fired with a 9mm handgun at a dummy using the clipboard as a shield. Again, not one shot penetrated the shield.

Finally, they tested another product from the same manufacturer as the clipboard, and it is called the Veteran’s Backpack Plate. This product sells for $349 and differs from the other shields, as it is hard, inflexible, thicker and heavier than the flexible models in the other tests. It weighs four pounds.

I think backpacks are heavy enough as it is, but the appeal of this product is that it claims it can stop gunfire from handguns like the others, but also gunfire from high powered rifles. The tests were performed using an AR-15 and an AK-47. Multiple shots were fired using both weapons. As with the other products, not one shot penetrated the shield. 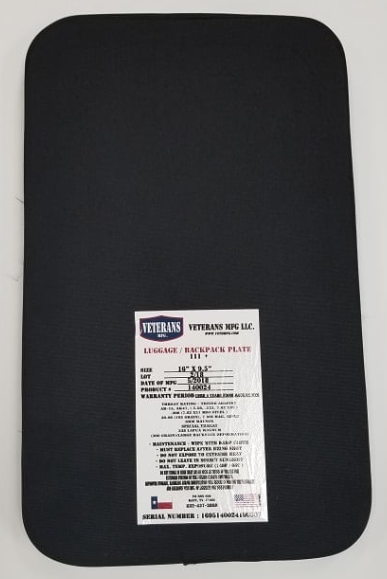 So to answer the question do bulletproof backpacks work?

I think these tests clearly show that they do.

Bulletproof backpacks do not solve the problem of gun violence. I’m not normally a fan of dealing with symptoms instead of addressing the problem itself. But clearly, legislators can’t come up with a fix, and I think that may be because their isn’t one that can be legislated.

In the meantime, I think these bulletproof backpacks products are excellent tools parents can use to try to protect their children from the evil that are school shootings. I don’t think it is enough to simply have these products, and students should be taught how to use them properly in an active shooter situation.

Parents should check with their school district to see what is allowed and then spend time showing students how to use bulletproof backpacks to protect themselves.

It is always exciting to start a new school year. It is not my intention to be a buzzkill on all the fun by talking about bulletproof backpacks. But I think we as parents have to come to terms with the reality that this threat exists and we cannot rely on our government or anyone else to take measures to protect our children. I know schools are beginning to address this issue with upgraded security measures. Is it enough?

Abraham Lincoln said, “The legitimate object of government is to do for a community of people whatever they need to have done, but cannot do at all, or cannot so well do, for themselves–in their separate, and individual capacities.”

I think many people feel the government is not doing enough to address the issue of school shootings. I say we don’t have the time to wait for them to figure it out. The companies that sell these bulletproof backpacks have reported an increase in sales, so it would appear that many parents feel that way and are taking matters into their own hands.

It’s tough out there and I encourage you to do your own research and make informed decisions that can help keep our children safer and just maybe give us all a little peace of mind.

If your school has taken proactive measures to protect students or if you have ideas of your own, please feel free to share in the comment section. 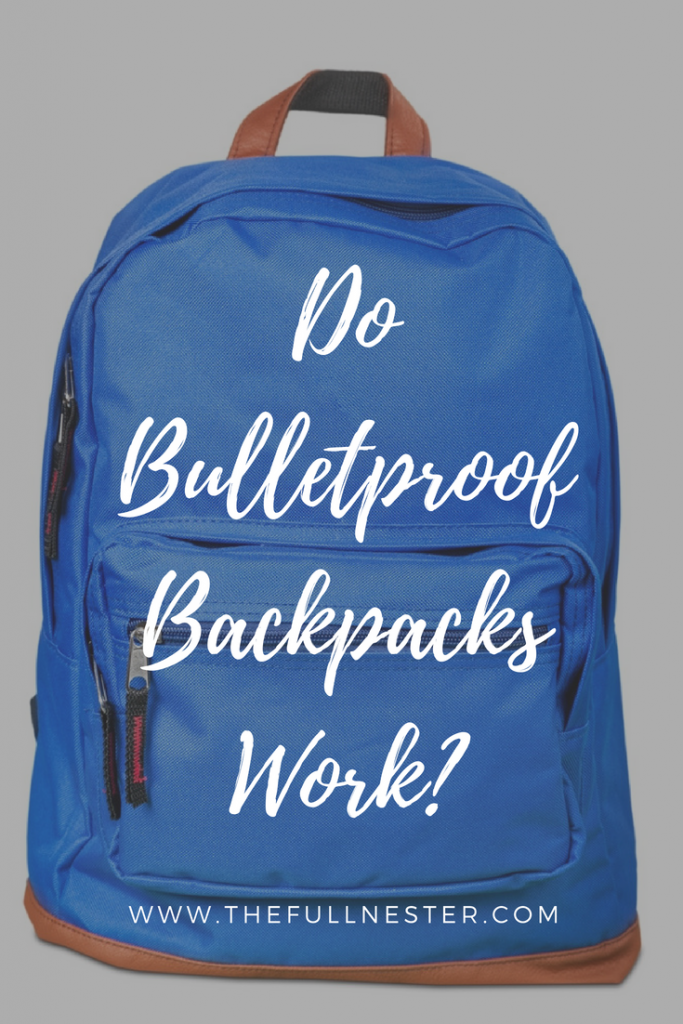