Battle of the Banana Nut Breads 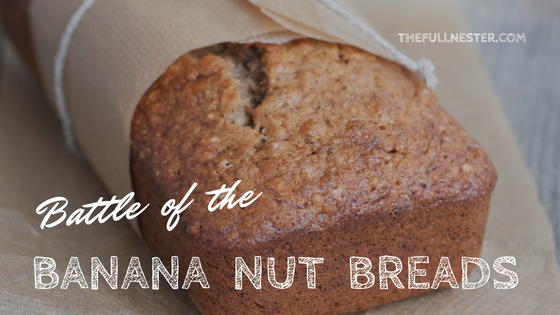 I LOVE banana nut bread. I have made it for as long as I can remember and have remained true to one recipe for extended periods of time. Until I got married, I had always made my great-grandmother’s recipe. I really liked it but the recipe called for buttermilk, which I don’t like, so I never have it around unless I have to buy it for a recipe. So it was inconvenient to have three dead bananas lying on the counter, just WAITING to be made into banana nut bread, and have no buttermilk on hand. Like these guys, who make an appearance by the end of almost every week: 🙂 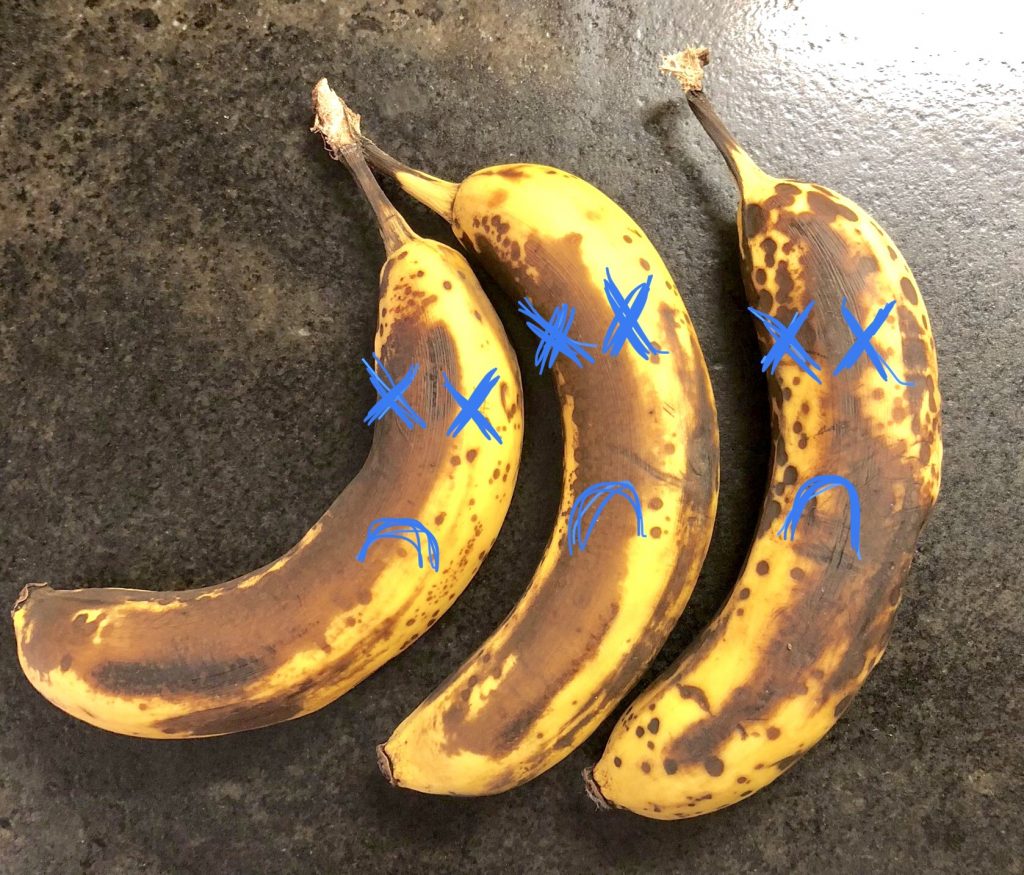 When I first got married, a dear friend of mine named JoAnn gave me cookbook of Southern recipes. I was a Yankee and she thought since I was marrying a Southerner I needed to up my culinary game. She wasn’t wrong. 🙂 Her collection of recipes included a recipe for banana nut bread. I started making it and it became the favorite. 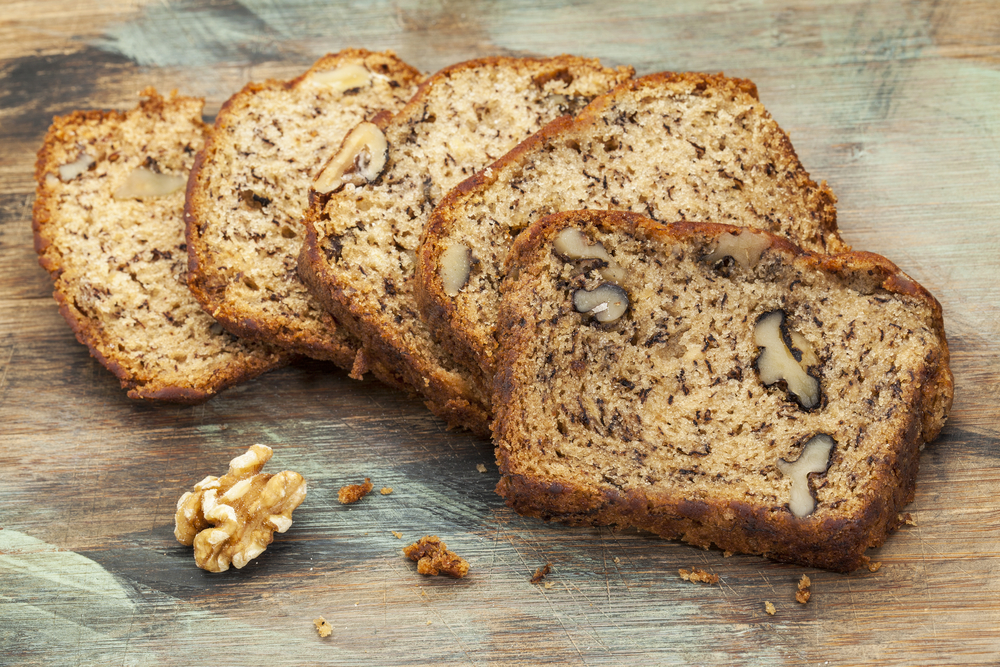 JoAnn was one of those women that just made everyone feel like she was their mom. At the time she was more than twice my age, always dressed to the nines, never met a stranger, and she taught me I was capable of way more than I ever thought. She has since passed away, but every time I see her writing when I pull out that cookbook, it makes me smile.

Even though she was much older than my husband, she always flirted shamelessly with him. She always tried to convince him to reconsider his marriage to me and take up with her. 🙂 This was all done in fun, as everyone was happily married. I first met JoAnn because she taught craft classes at our church. She convinced me to take her painting classes even though I told her I couldn’t paint. She said that was nonsense, and that I just didn’t know HOW to paint.

I think my junior high art teacher will have a lot to answer for someday for everyone she convinced that they had no artistic talent. There was one boy in my class who was enormously talented, and she only had eyes for him. She gushed all over his work and the rest of us might as well have gone to recess. She wouldn’t have noticed. And when she did notice us, it was to be critical of our artwork. So I pretty much figured I had no artistic talent. Then along came JoAnn.

She could paint anything freehand and had a way of breaking everything down into doable steps. She taught us how to paint flowers, still life, perfect hearts every time, animals, faces, everything. I couldn’t believe the stuff I would come home with each week when I took her class. And she could fix anything you messed up. One time we were painting wooden turkeys for Thanksgiving and she had shown us how to paint the feathers on his chest. I tried to replicate what she had shown us, and it didn’t look so hot. I took my turkey to her and she said, “Oh my.” I said, “That’s the meanest thing you’ve ever said to me!” 🙂 She said not to worry, we would fix it together. And we did.

Here are my little wooden reindeer she taught me how to paint for Christmas: 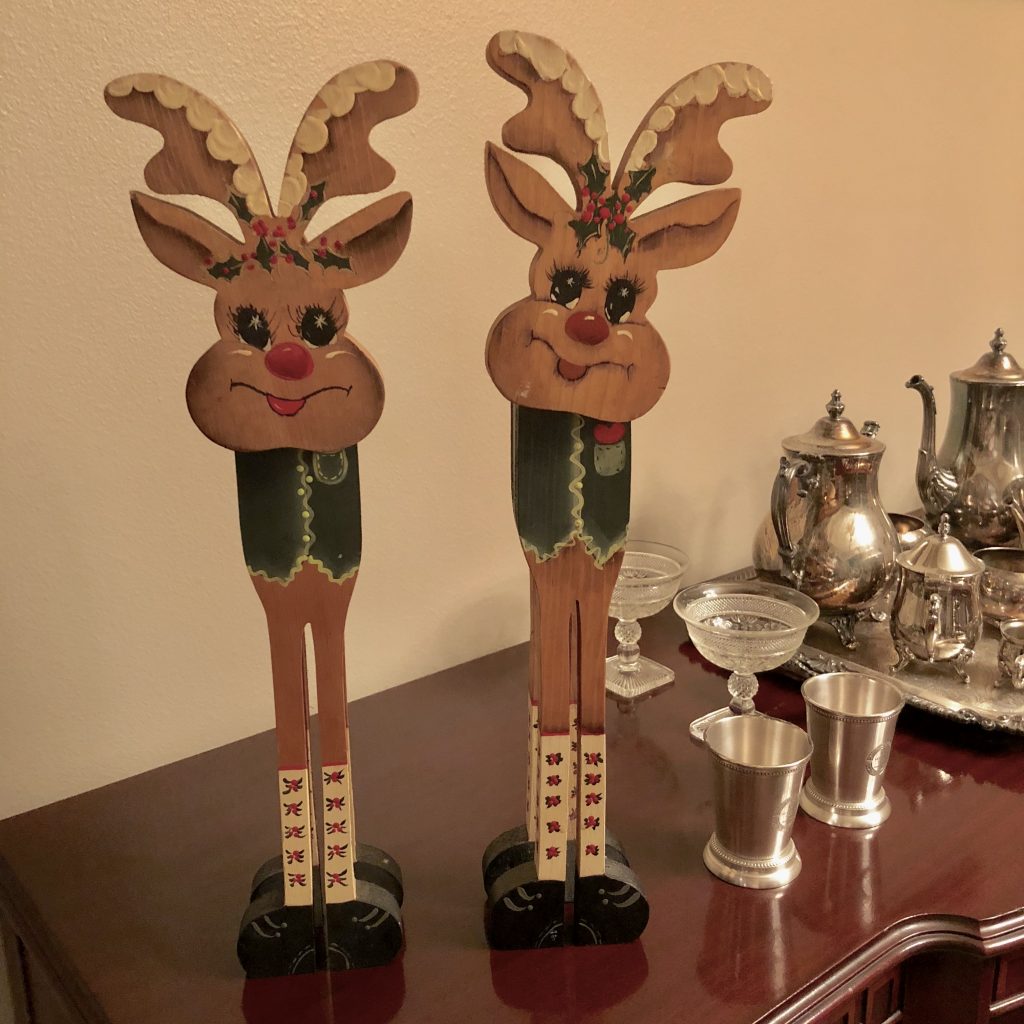 She’s been gone for almost twenty years, but I still have everything she ever taught me to paint. I put them out every year during the holidays. And I still make her banana nut bread recipe. I will share it with you in a minute.

About a month ago, I bought Joanna Gaines’ new cookbook, Magnolia Table: A Collection of Recipes for Gathering

If you don’t know who Joanna Gaines is, you need to get your “shiplap” together and find out. 🙂 She is, along with her husband Chip, the host of the wildly popular Fixer Upper

show on HGTV. It has ended production with the conclusion of this season. Everything Joanna does is amazing. She has a ton of kids, one of which is a newborn. She runs the family farm. She designs renovations. She picks the best paint colors. She runs a restaurant and a bakery. She publishes a magazine. And she always looks gorgeous doing it. I honestly don’t know when the woman sleeps. I would really hate her if I didn’t like her so much. 🙂

I took this picture of the cover of her magazine last winter. See? Beautiful. 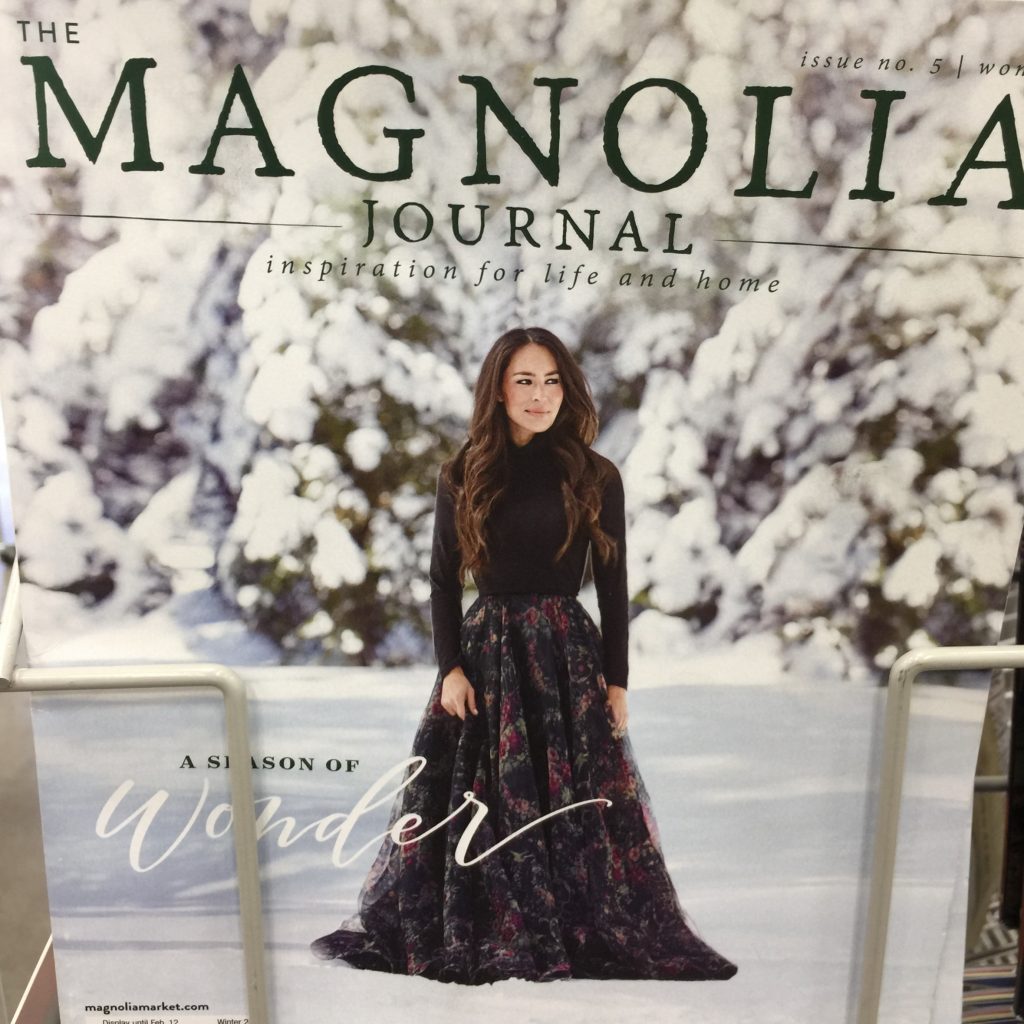 This cookbook of hers is really good. It is big and hefty, and has recipes for food real people eat. Especially Southern people. I was excited to find a recipe for banana nut bread among the bread recipes. I decided to make it and see how it compared to my friend JoAnn’s recipe. It uses similar ingredients, but more bananas than my recipe. And the consistency is more cake-like than the recipe I’ve been making for years. And as a girl after my own heart, she sprinkles the top with sugar before baking so that it comes out with a crunchy topping. Yes! 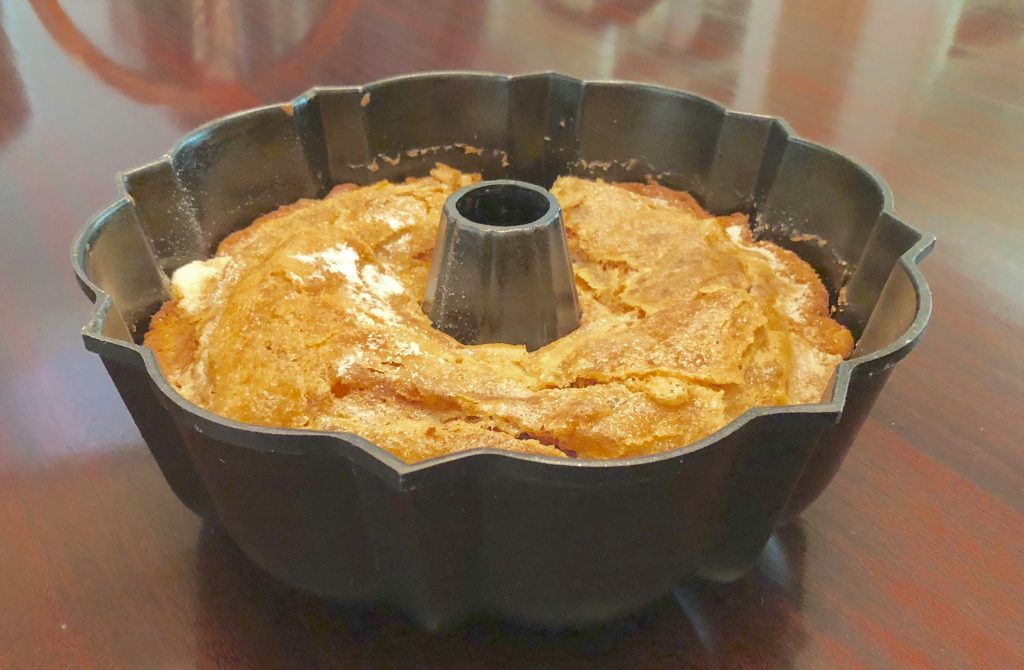 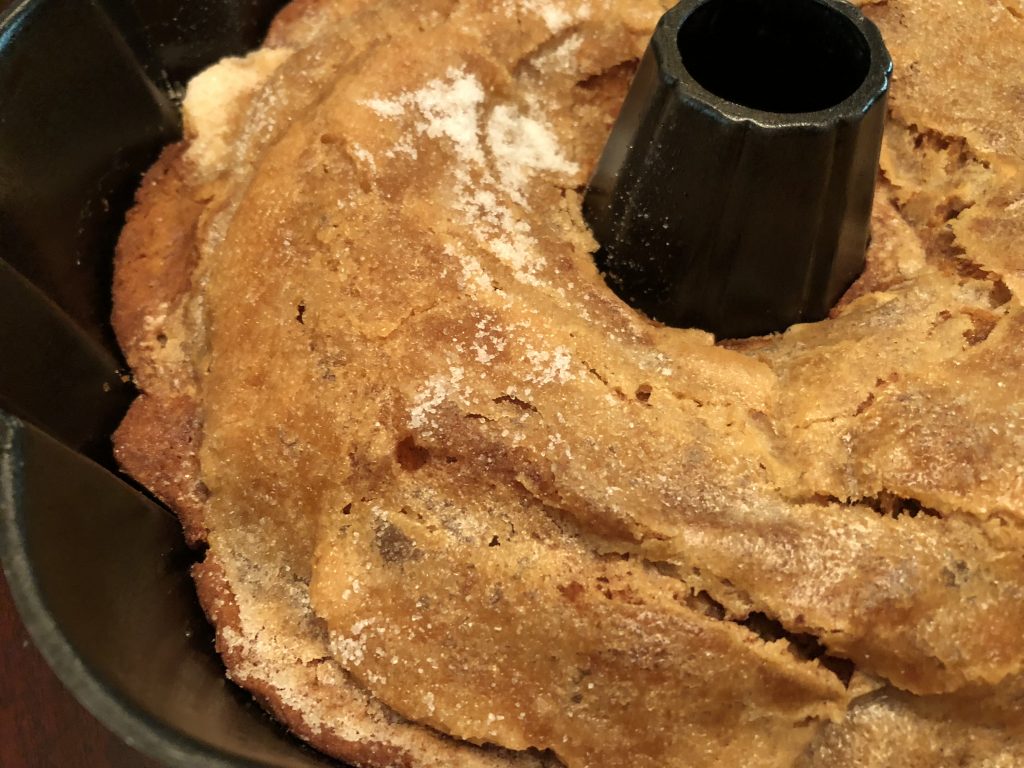 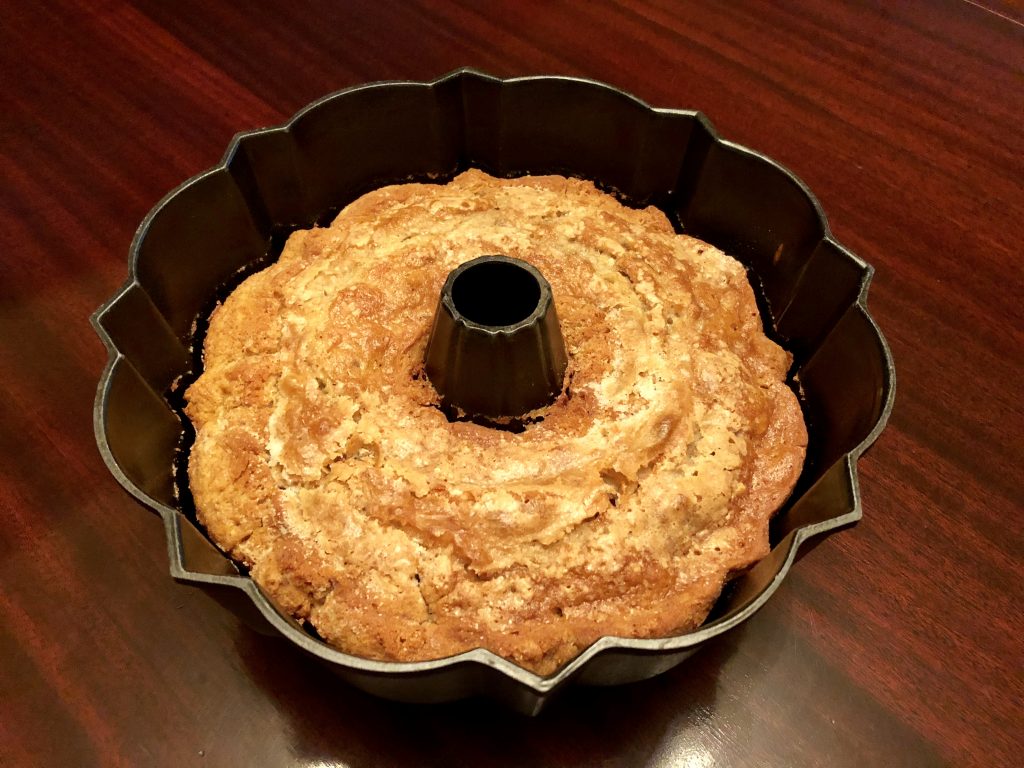 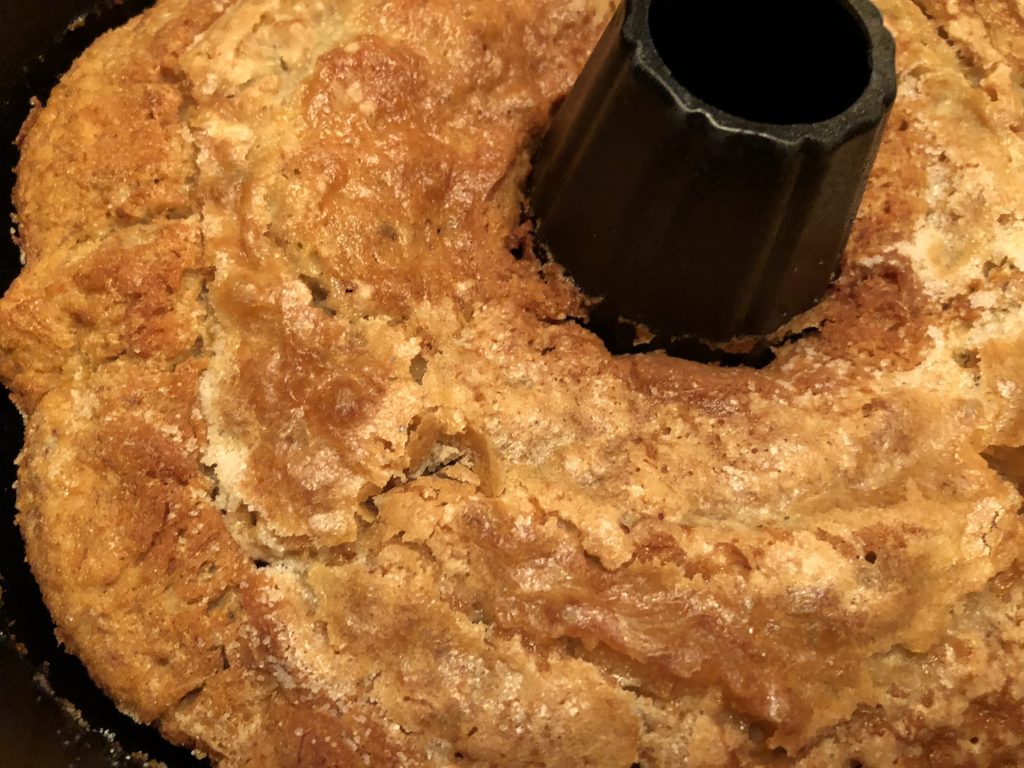 So let’s get started on this recipe from my friend JoAnn with a crunchy topping from Joanna. 🙂

Cream the butter and sugar. 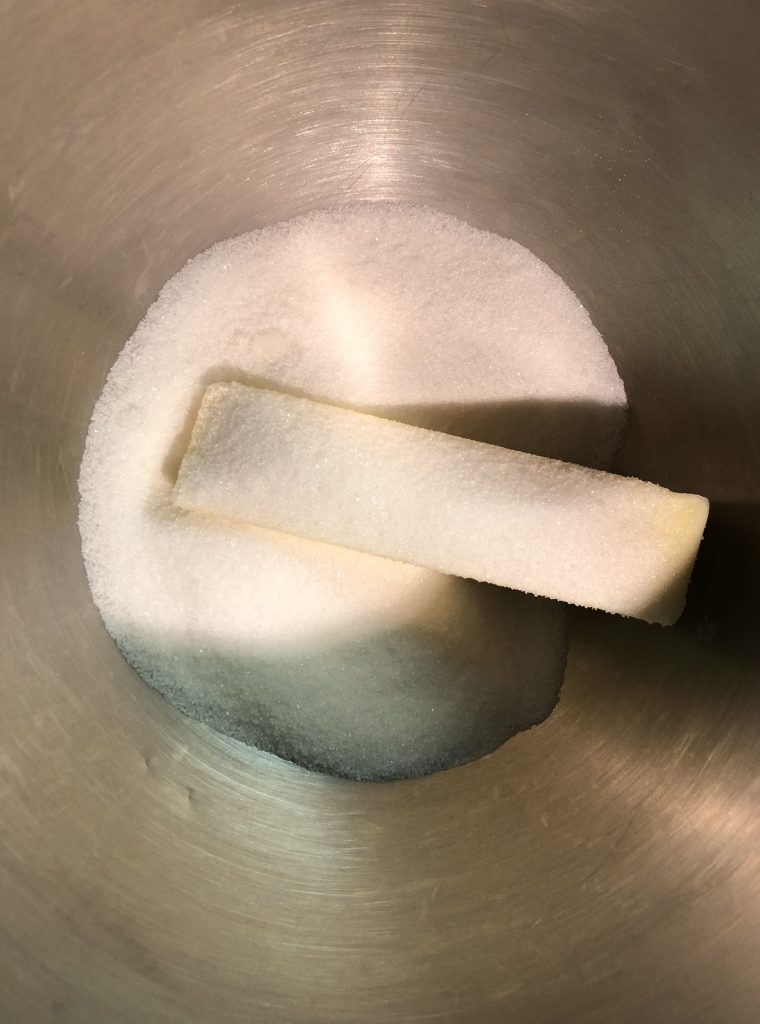 If you don’t have a splash guard on your mixer, you may want to cut the butter into small pieces. If not, it makes the sugar fly everywhere. Or so I’ve heard… 🙂 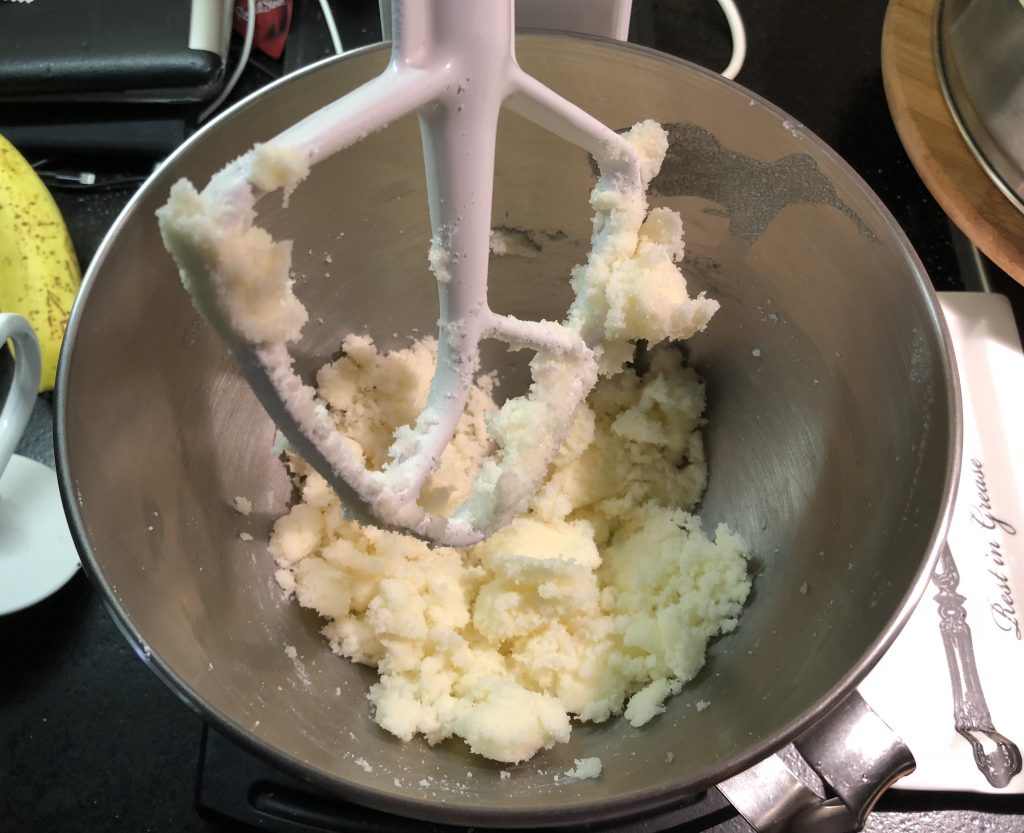 Add the eggs and beat until combined. 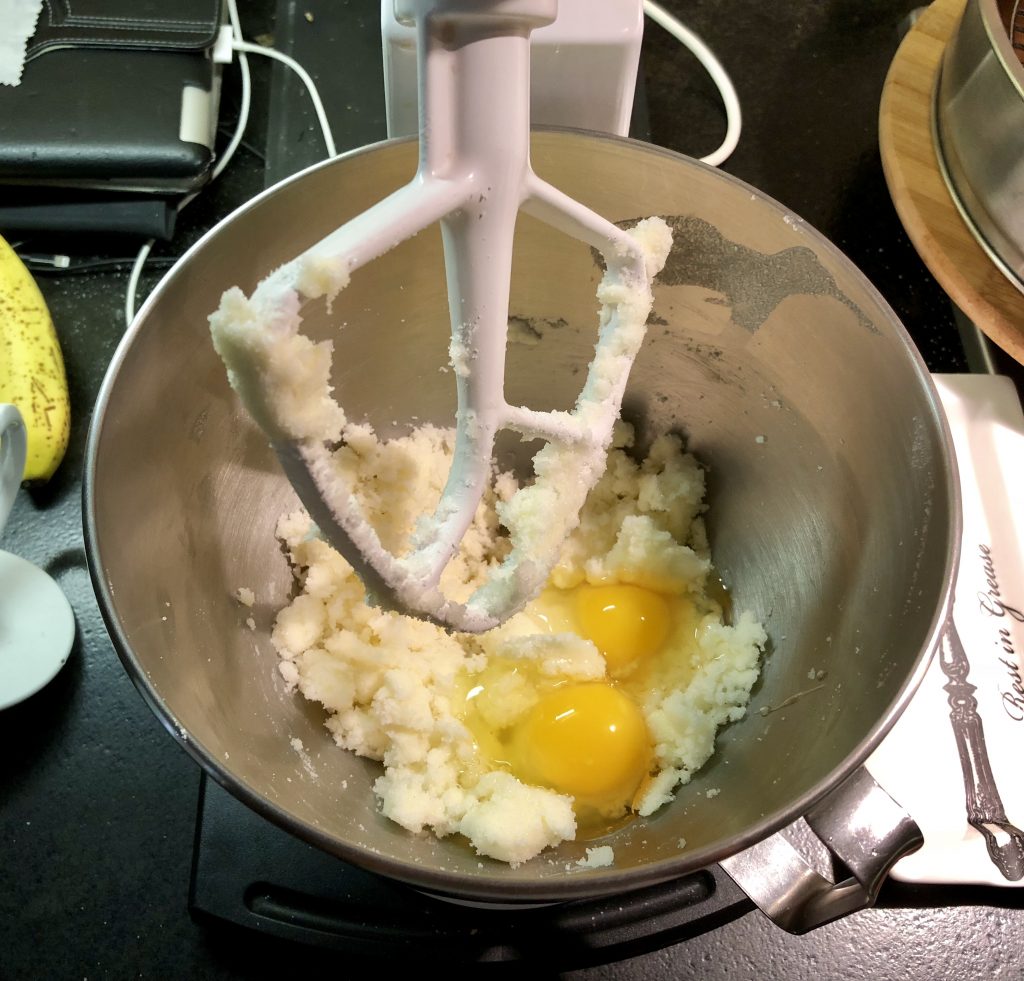 Add the bananas and mix. 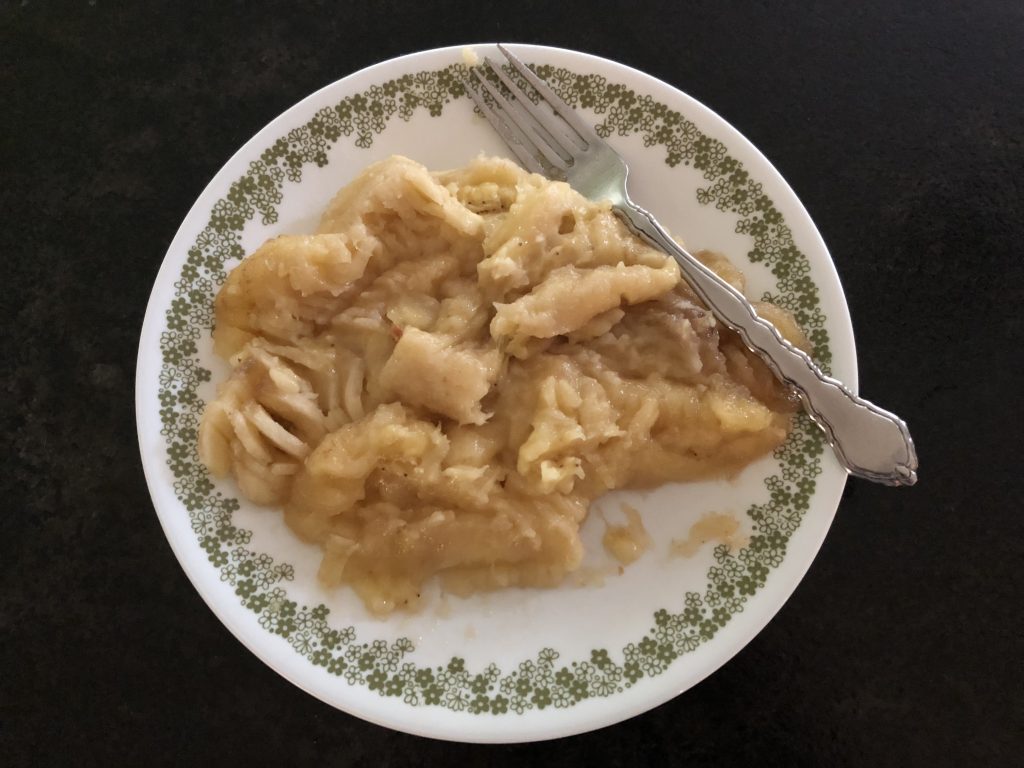 Add the baking powder to the flour and mix into the creamed mixture. Here’s a tip with baking powder. Fold the little foil seal halfway back so you can scrape the measuring spoon along it to get a perfect measurement. 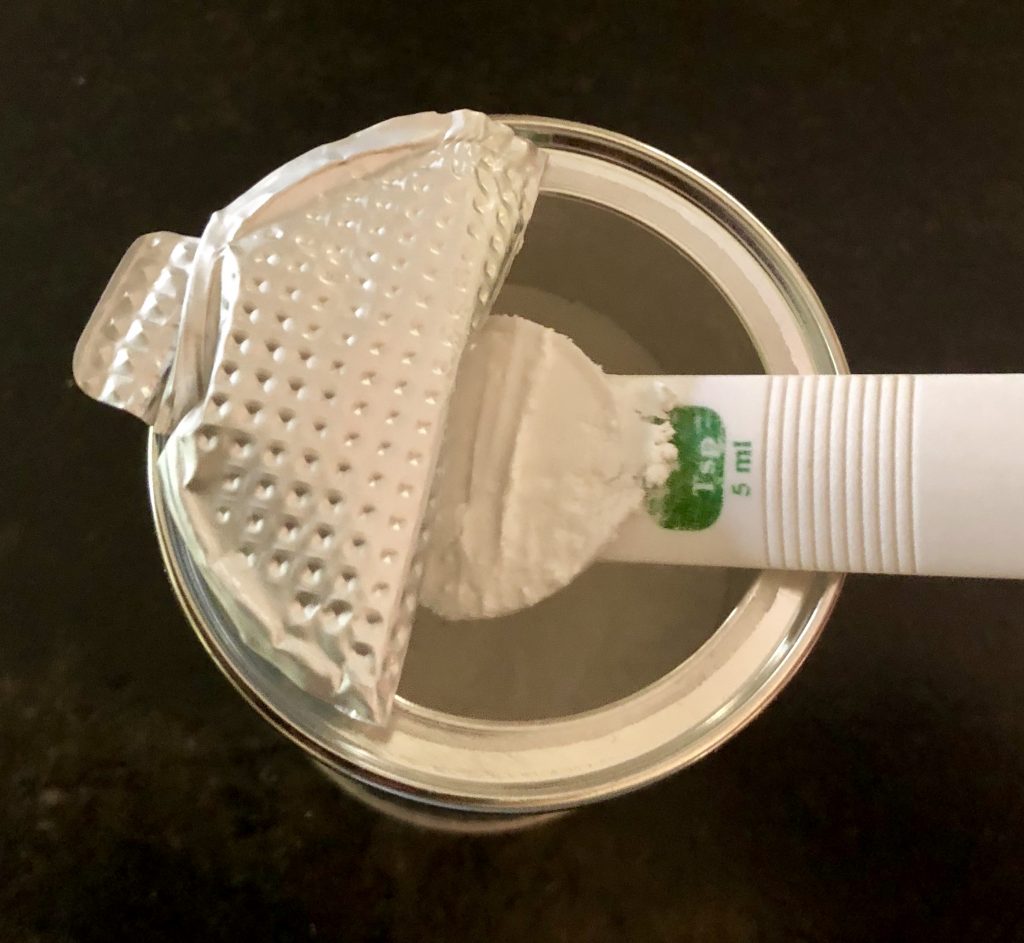 Add the nuts. Add soda last that has been mixed with 1 tsp. of water. Mix to combine. 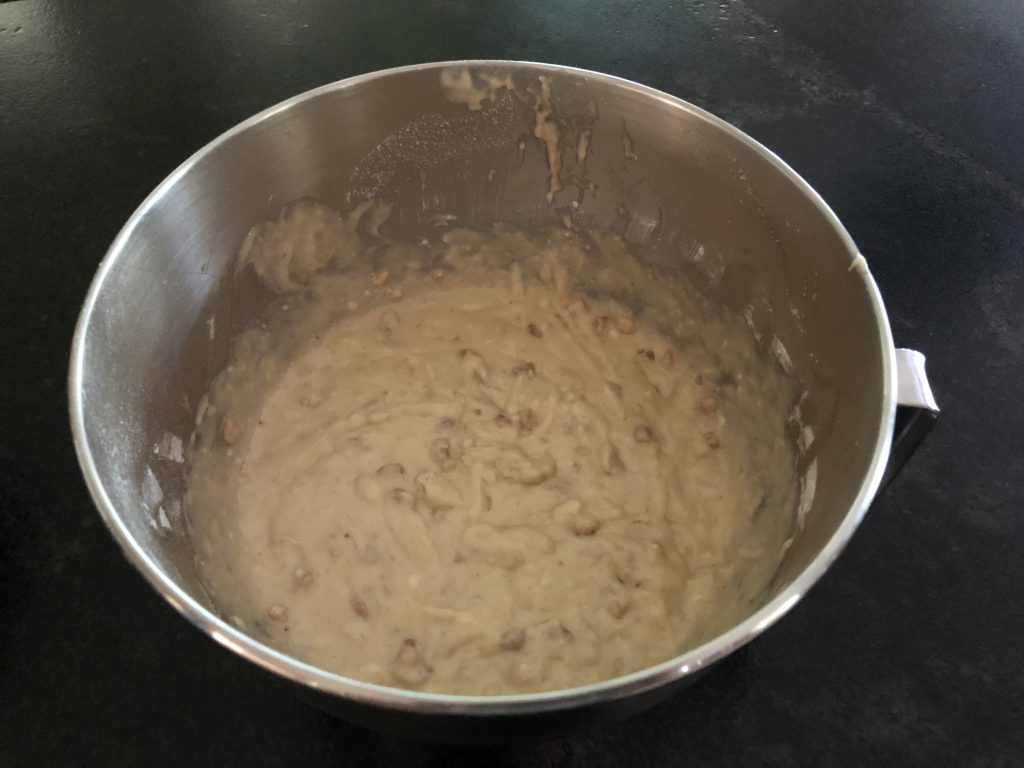 Put in 2 loaf pans or a bundt pan that have been greased and floured. I like bundt pans. 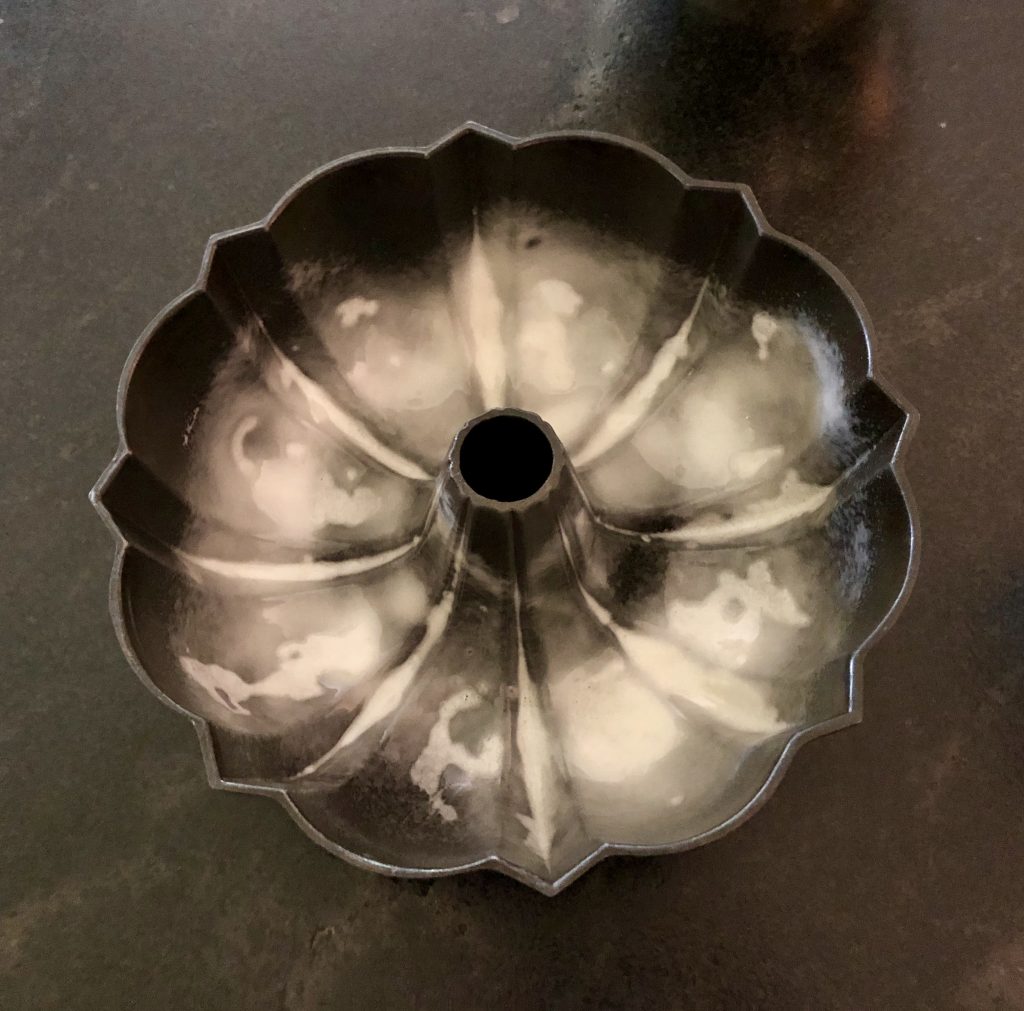 Sprinkle with sugar if you’d like a crunchy topping. Bake for 40-50 minutes.

Here are the instructions all together: 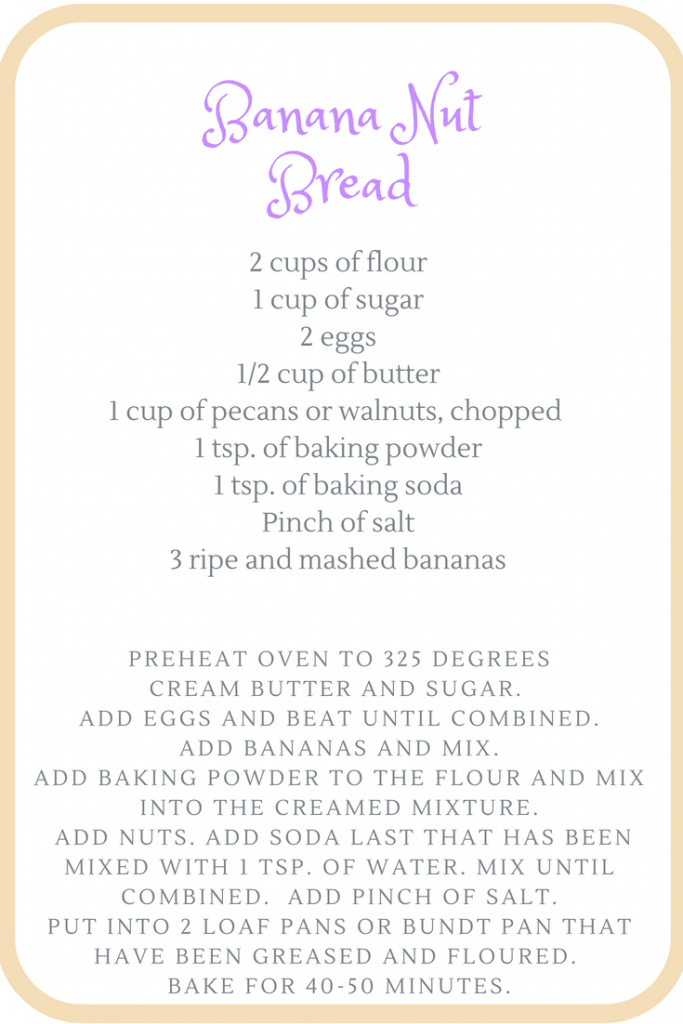 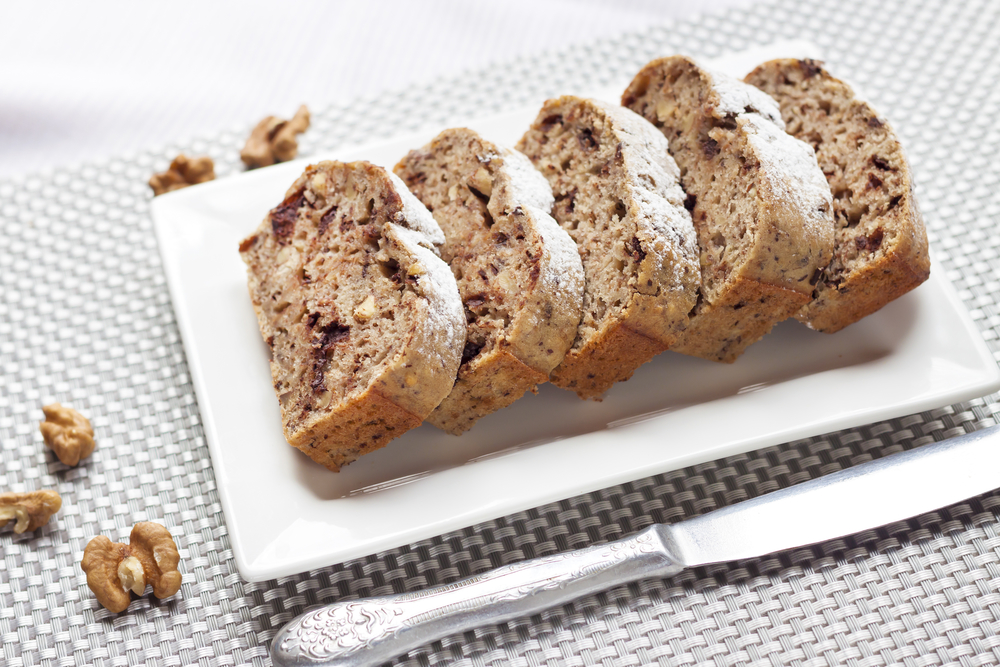 I really like the combination of the two recipes. I fed my new mashup recipe to everyone for breakfast and everyone liked it. We also had company last weekend so they got in on the tasting as well. Everyone liked it. I like both recipes and don’t really have a preference. I’ll pretty much eat anything that even slightly resembles banana nut bread. 🙂

Give the recipe a try and tell me what you think! I’d also love to hear if you have a favorite banana nut bread recipe. 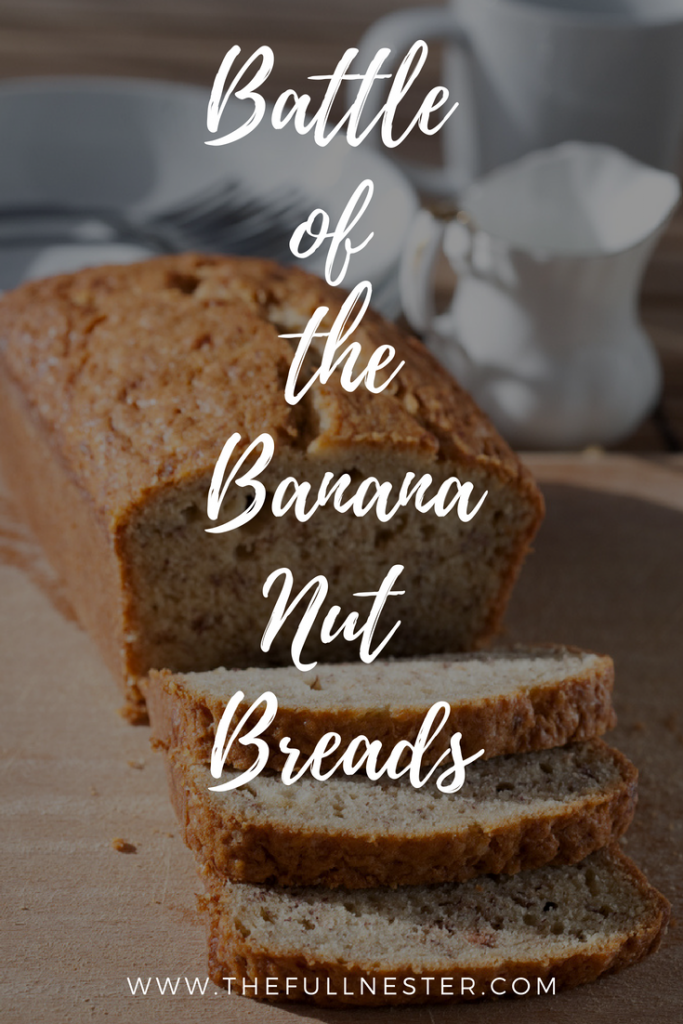